The first Batman by rocksteady, Batman: Arkham Asylum, remains a favorite of the series for many players who prefer it to the open worlds of its sequels, but the original was released in 2009 and its graphics don’t look as good at today’s resolutions. GPUnity has released an HD texture pack for this action title, now available for download.

This HD Texture Pack recreates many of the most visible textures throughout the game, including the Batman suit, to bring the overall quality closer to Arkham Knight: 4K textures, improved skin, hair, higher quality shadows, better anisotropic filtering, and other effects. It’s not a major overhaul – there are plenty of other unupdated textures, and renders don’t gain geometry – but it’s certainly preferable to the original version.

also includes the DLC to play with Joker released on PS3 and later appeared in the Mac version, in addition to the challenge maps Prey In The Darkness, which include areas not available during the main campaign. Finally, thanks to advances in artificial intelligence and neural networks, recorded scenes have been recreated in video format to improve its quality and not clash with the rest of the graphics.

Its authors mention that this mod is born due to the absence of the official remaster Return To Arkham, released on consoles a few years ago. In comparison there are advantages and disadvantages with the remastering, since in that case almost all the textures, modeling and other effects were updated, although that meant changing the art of certain elements slightly and the maximum resolution is 1080p, in addition to using the same video streams at 720p. 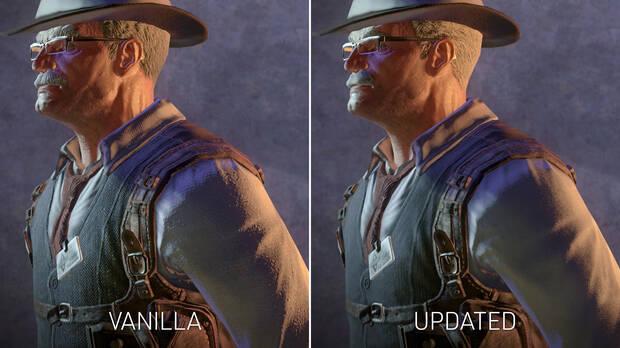