Last night, the plenary session of the Chamber of Deputies rejected the electrical reform initiative of President Andrés Manuel López Obrador, failing to reach the qualified majority of two thirds of the vote. 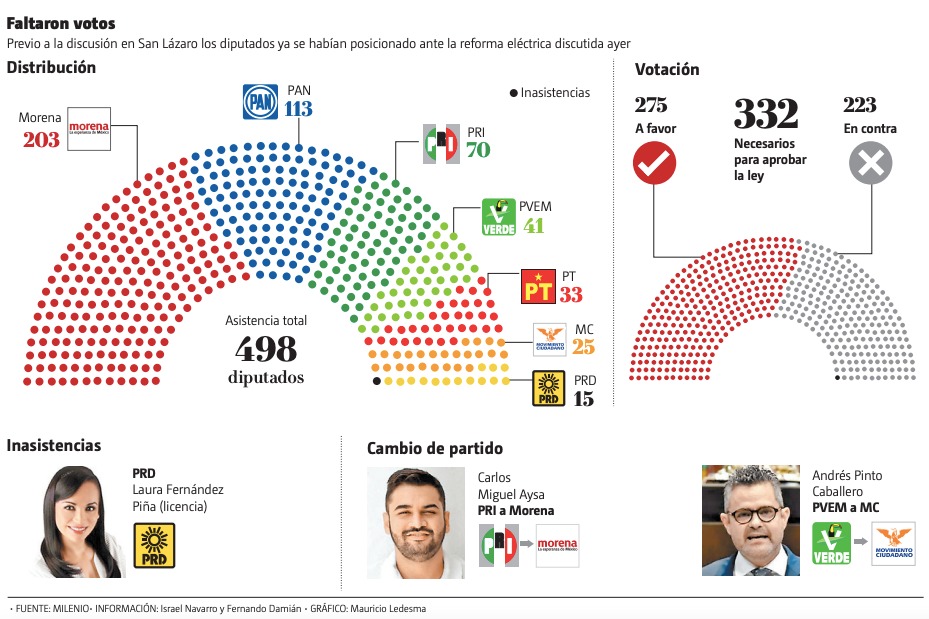 With 275 block votes Morena-PVEM-PT in favor and 223 of the PAN, PRI, MC and PRD against, the project fell short of 57 of the 332 necessary to be endorsed.

While the deputies prolonged the debate, the president Lopez Obrador He sent the message: “I already said it in my report on Tuesday: whatever happens, we are already armored against treason. Tomorrow (today) I will explain it again”. The Political Coordination Board had received notice of the sending from the National Palace of the initiative to reform the Mining Law, which the president announced from that message on Tuesday to establish state ownership of lithium, which does not require a constitutional reform by two thirds parts of the deputies.

President Lopez Obrador sent last night to Chamber of Deputies his initiative to reform the Mining Law to reserve the exploitation of lithium to the Mexican State, without allowing the granting of concessions for that purpose to private companies.

This was confirmed by the coordinator of the parliamentary majority of Morena in the Chamber of Deputies, Ignatius Mierand reaffirmed the intention to call an ordinary session this Monday to discuss and vote on the project in fast track.

This, as an alternative to protect lithium against the eventual rejection of the Chamber of Deputies to the constitutional reform in electrical matters.

“It is done. I am aware, I consulted the Board of Directors a moment ago and apparently it is already here, and the Political Coordination Board also agreed that tomorrow (today) there will eventually be a session in the Chamber of Deputies to discuss and, where appropriate, vote on this initiative presented by the President,” he said.

Yesterday the plenary reached an unusual quorum of 498 deputies, only with the absences of the PT Ana Laura Bernal and the perredista Laura Fernandezalthough the latter for being licensed for an indefinite period of time.

The extra vote that Morena had won in her favor since Thursday with Carlos Miguel Aysa Damas it was diluted during the morning, because Andres Pintosof the Greenannounced his integration into Movimiento Ciudadano and the project of the governor of Nuevo León, Samuel García, as well as his vote against the presidential initiative.

To the cry of “No pa-sa-rá! It will not pa-sa-rá!”, the deputies of the opposition alliance goes to Mexico They anticipated their vote against the reform of articles 25, 27 and 28 of the Constitution, while the Morenista caucus, along with the Greens and PT, called again and again to support the presidential proposal.

“Think about whether you want to subordinate yourself to foreign money and companies, as bad legislators, bad officials and bad Mexicans did in 2013. Do not mortgage your honor, because there will be no money to recover it. Honor is a matter of dignity and moral quality”, pointed out from the rostrum the coordinator of the morenista majority, Ignatius Mier, when fixing the position of your bench.

In his turn, the leader of the deputies of the BREAD, Jorge Romerostressed that the opposition coalition is in favor of economic freedoms, clean energy, lower rates for people who need it most.

“Many were betting that… the Va por México coalition was going to dissolve. Well, today we tell you that the women and men of the BREAD, PRI Y PRD We are more united than ever,” he added.

The national president of PRI, Alexander Morenoremarked that the Legislative is a power, not an employee of the power, for which the electrical reform will be the first initiative of Lopez Obrador rejected by the current legislature.

“Today (Sunday) they will have the biggest and most monumental defeat. Your reform will not pass. And let it be heard loud and clear: the first of three. If they continue with that arrogant attitude, the three will go against it and no proposal will pass in Congress”, he harangued.

The coordinator of MC, Jorge Alvarez Maynez, seconded the opposition’s rejection of the reform and warned: “Today the office of parties ends and the Legislative Power begins. Today a stage of the government in which they imposed what they wanted is coming to an end. Today begins the new stage of Mexico, which will culminate in the 24th with the defeat of the regime”.

At the beginning of the discussion and through the deputy Andrea Chavezthe parliamentary group of Brunette in the Palace of San Lázaro he asked the PAN legislator Margaret Zavala excuse themselves from voting on the electricity reform due to an alleged conflict of interest, by benefiting from more than 8 million pesos of avangrida subsidiary of Iberdrola, of which her husband was a director, Felipe Calderon.

Chavez asked the President of the Board of Directors, Sergio Gutierrez Lunaadmit the request and the evidence provided, so that the constitutional reform is voted “with honesty and legitimacy” in plenary.

“We delivered unsaid, evidence! Of the millions of pesos that entered the home of Margaret Zavala through one of the subsidiaries of IbedrolaI mean avangridwhere Felipe Calderon He worked as a management advisor. Chavez in a later interview.

By agreement of parliamentary leaders, Sergio Gutierrez Luna exhorted to Margaret Zavala to excuse herself from the vote, but the PAN deputy rejected the call, categorically denied any conflict of interest and reaffirmed her intention to vote against the reform.