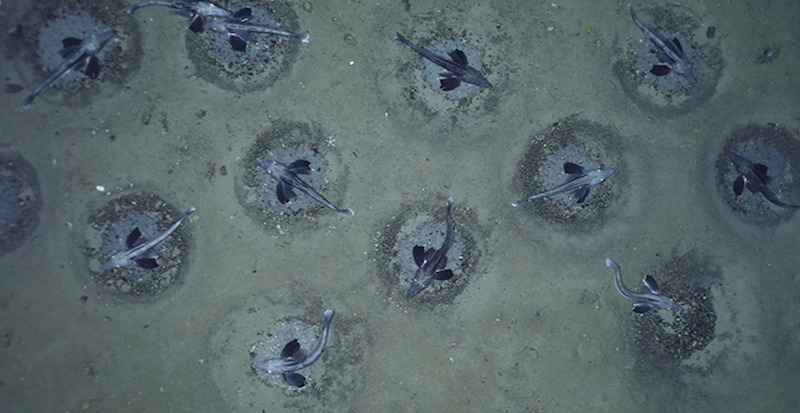 A research team accidentally discovered a gigantic colony of fish in Antarctica, which stretches across the bottom of the southern part of the Weddell Sea for about 240 square kilometers. From observations, it is estimated that in the area there are about 60 million nests of cannictidae (or “ice fish”) belonging to the species Neopagetopsis ionah, able to live in the very cold temperatures of the marine waters of Antarctica.

While they were carrying out other measurements related to the temperature of the water in the Weddell Sea, the researchers noticed the presence of some fish nests via an underwater camera. They thought they would find a few dozen of them, as happened in previous expeditions, but instead they observed an enormous quantity in a large area of ​​the seabed, as they explain in a study recently published in the scientific journal Current Biology.

The area where the nests are found has waters that are about 2 ° C warmer than the surrounding areas, and this could explain the presence of so many cannictidae, which reach the area to reproduce. In addition to being more suitable for breeding, the higher temperature could be used as a guide by these fish to find where they have established their colony.

The area of ​​the Weddell Sea where the surveys were made (Autun Purser et al., Current Biology)

Such a large amount of fish suggests that the affected Weddell Sea area plays a very important role in the marine ecosystems of Antarctica. Their presence guarantees an important hunting area for seals, which populate part of the continent. Without cannictids, there could be serious consequences not only for seals, but also for several other Antarctic animals.

The nests were observed at a depth between 420 and 535 meters, with a high density of specimens, refuting previous hypotheses about the scarce presence of fish and animals in the depths of the seas around Antarctica. The discovery shows that there are still many things to discover, and not just about fish populations.

Over the next two years, the research team will carry out new observations to understand what the colony’s rhythms and times are, and how its presence affects the existence of other species. A new survey will be carried out starting from April and will be used to understand if these fish actually reproduce in the same vast area of ​​the Weddell Sea.