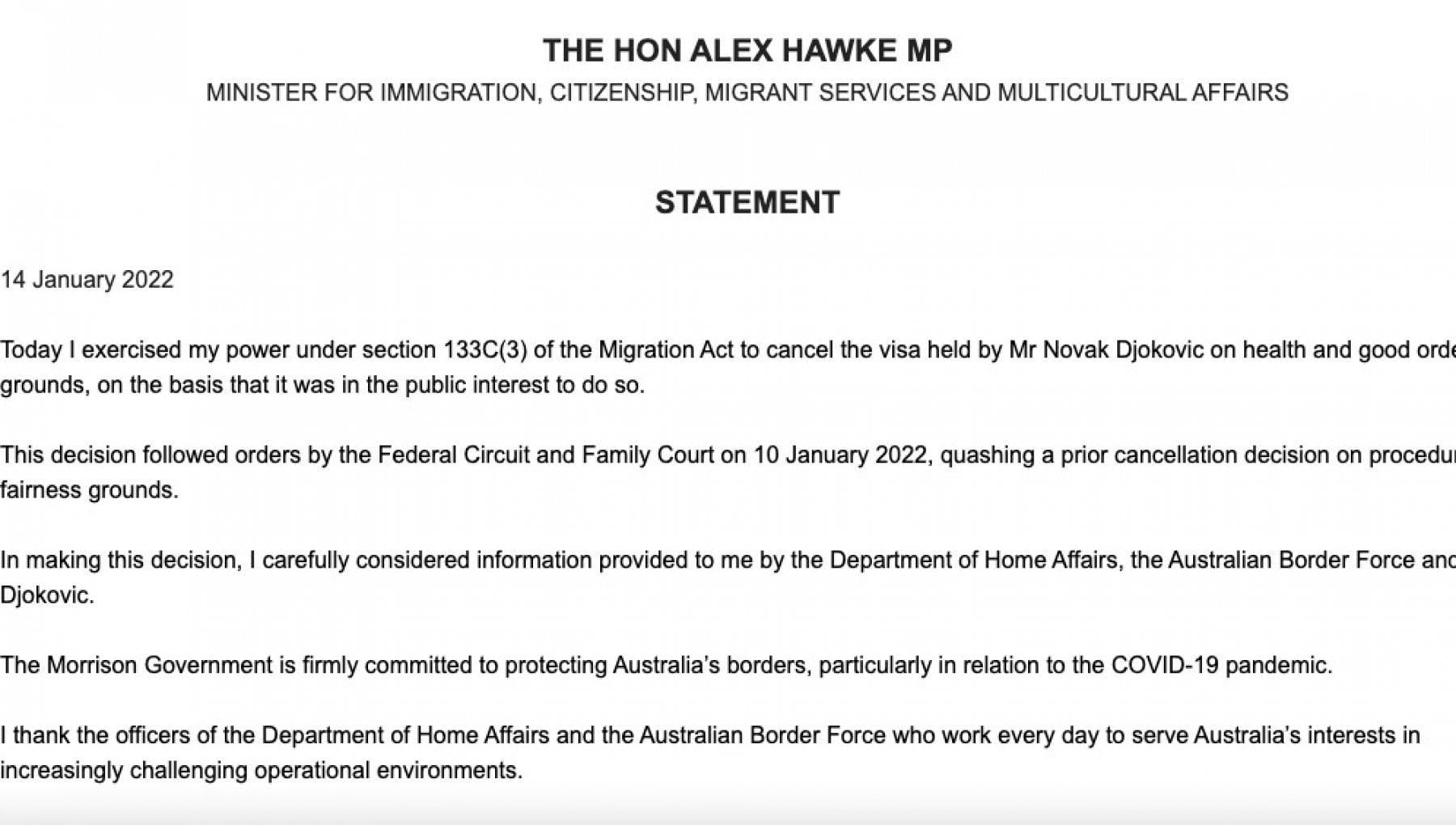 Australia decided: Novak Djokovic must be expelled. The Minister of Immigration Alex Hawke used his personal power to cancel the Serbian tennis player’s visa. His lawyers are already preparing the immediate appeal.

The tennis number one had been drawn into the draw of the tournament which kicks off on Monday. Hawke stated: “I exercised my power under section 133C (3) of the Migration Act to cancel Mr. Novak Djokovic’s visa for health and good order reasons, on the grounds that this was in the public interest. This decision followed the Federal Circuit and Family Court orders of January 10, 2022, which reformed a previous annulment decision on grounds of procedural fairness. In making this decision, I have carefully considered the information provided to me by the Department of Home Affairs, the Australian Border Force and Mr. Djokovic. The government Morrison is firmly committed to protecting Australia’s borders, particularly in relation to the COVID-19 pandemic. “

But that’s not the end of this story. The lawyers of the number one in world tennis have already presented the appeal, with the aim of being evaluated by Sunday, in order to allow Djokovic to remain on the board and participate in the Australian Open of which he is defending champion and has won nine times in his career. Nole should have made his debut against his compatriot Kecmanovic.

The No Vax Djokovic amidst errors, lies and admissions: the reconstruction day by day

What is certain is that the Serbian will have to leave the organization’s four-star hotel to return to the Park, the detention facility for visa-free immigrants and, of course, the refinement of training ahead of the Grand Slam, will be put to the test. At the moment, the Australian Open has not yet removed him from the tournament. And, for Djokovic, there is a further problem: when Australia cancels a visa, the person cannot re-enter it for the next three years.

The decision arrived on Friday in the Australian evening does not seem to leave space and time for the defense, which instead points to an immediate injunction to allow him at least to take the field in the first round, pending a real trial next week. But this would further deprive the tournament of credibility, with Djokovic on the pitch awaiting trial.

Australian Open, Djokovic dumped by other tennis players: “He makes us feel idiots”