The Bitcoin network processed $ 489 billion per quarter in the course of 2021, a result sufficient to overcome Paypal with his $ 302 billion per quarter. This was determined by a recent report by Blockdata which also takes into consideration the distance that separates the network of the popular cryptocurrency from that of the most popular credit card circuits, Visa and Mastercard. The bare and raw data is clear, the gap is still wide: the Mastercard network processed quarterly transactions worth $ 1.8 trillion (+ 260% compared to Bitcoin), Visa $ 3.2 trillion per quarter (+ 540%).

Woe to underestimate the result: to read the data from another point of view, one must consider that the Bitcoin network, after 12 years of activity, is able to manage a quarterly transaction value equal to 27% of that processed on the Mastercard network, company that has been operating since 1966.

The challenge to traditional circuits is still open and Blockdata identifies three factors that could give the Bitcoin network the strength to hook the two giants of the credit card market – we mean by transaction value, without prejudice to the elements that differentiate cryptocurrency – which are also speculative instruments – from pure and simple payment circuits: 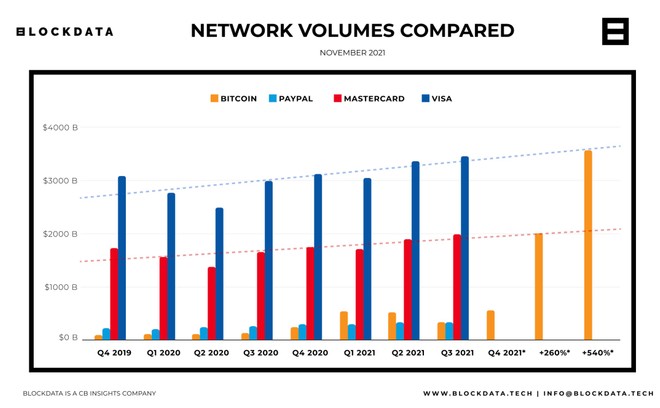 The first aspect is complicated by technical limitations of the system, while an effective combination of the other two factors could be easier to implement and more suitable for determining an increase in the value transacted on the Bitcoin network.

Returning to the opening data, an increase in the average value per Bitcoin transaction of 260% or 540% would allow the cryptocurrency to equalize Mastercard and Visa. Blockdata however point out that it is an entirely theoretical possibility, and that in practice an opposite trend has occurred, i.e. a decrease in the average quantity of bitcoin determined by the increase in BTC prices. The situation could change with a possible expansion of use cases, but at the moment there is no trace of this trend reversal. 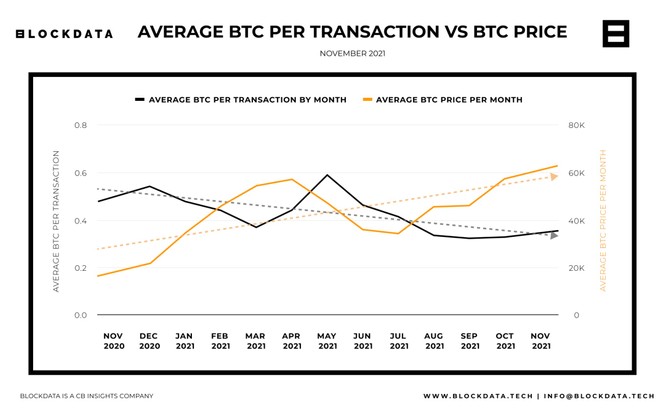 Similar considerations can be made in relation toprice increase of Bitcoin: if it grew by 260% or 540%, the blockchain would arrive at the transfer of a value equivalent to that, respectively, of Visa And MasterCard. In other words, to close the gap, Bitcoin should be worth $ 245,000 and $ 435,000 – today we are well below this threshold. Given that volatility and upward leaps in value are one of the hallmarks of cryptocurrencies, it is unlikely that it will reach similar levels any time soon. The authors of the study hypothesize a scenario, also entirely theoretical that sets a tie with Mastercard for 2060, taking into account the average annual price; taking into consideration only the growth rates of 2021, the breakeven instead could take place in 2026. Also in this case there is no guarantee that the trend will remain unchanged for such long intervals, considering the many variables – one of all the already cited correlation between the increase in the price of Bitcoins and the decrease in the average value per single transaction.

Regarding the first point – the technical limitations of the Bitcoin network – the study cites a technological solution, the Lightning Network protocol, which has allowed Bitcoin to increase the number of transactions it can handle. However, there is a lack of exact data on the number of transactions carried out on this network and it is necessary to proceed with estimates, such as those carried out in a study by Arcane Research which highlights how, in September 2021, about 663,000 transactions were processed on the Lightning Network and that in August the number Lightning Network users were approximately 100,000. If the number of users were to increase to 1 million – that is to say up to 1% of all Bitcoin users (estimated) – the daily volume of bitcoin transactions would almost double compared to the average recorded in 2021, reaching 220,000. The current trend is in the direction of the exponential growth of users and services that use Lightning Network, if it were to remain unchanged in the coming years it is possible that the Bitcoin network will process many or even more transactions than other financial circuits.

THREE FACTORS … PLUS ONE

The scenario proposed by Blockdata is that all three elements contribute in the future to increase the overall value of the transaction on the Bitcoin network. All the elements plus one: the foreseeable increase in the number of users. As mentioned, the estimated number is about 100 million (but these are estimates susceptible to error because it may not even be that a single user owns multiple wallets) and there are factors that suggest how the base may expand further in the coming years, one on all the rate of inflation. The study recalls that 1.66 billion people live in 37 countries where the inflation rate it is two-digit. An inflation of 10% leads to a halving of purchasing power within 8 years, meaning that savings lose half their value. This encourages more and more users to place their savings in assets that protect purchasing power and to consider Bitcoin as a possible solution. Starting from these bases, the date of 2025 to equalize the value of the transaction on the Mastercard circuit may not seem so far-fetched.