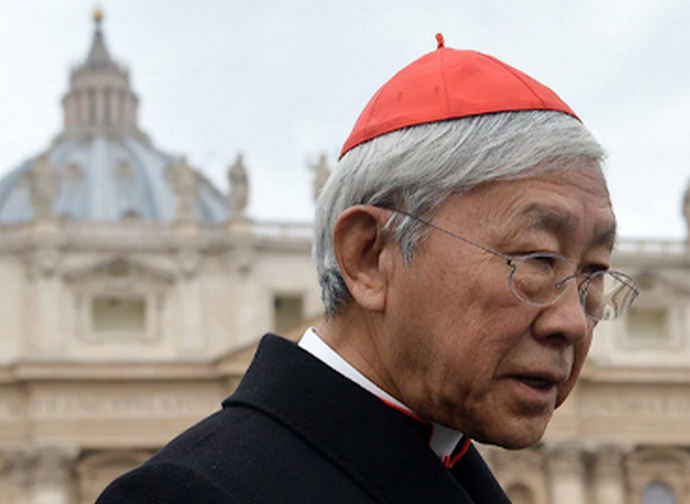 Cardinal Joseph Zen Ze-kiun, bishop emeritus of Hong Kong and point of reference of Chinese Catholicism, indomitable defender of the freedom of the Church, turns 90 today. We want to celebrate this birthday with the testimony of one of our collaborators who in recent years has had the opportunity to attend it closely.

Cardinal Joseph Zen Ze-kiun, bishop emeritus of Hong Kong and point of reference of Chinese Catholicism, indomitable defender of the freedom of the Church, turns 90 today. We want to celebrate this birthday with the testimony of one of our collaborators who in recent years has had the opportunity to attend it closely.
***

On January 13, 1932, Joseph Zen Ze-kiun was born into a Catholic family in Shanghai, today Bishop Emeritus of Hong Kong and Cardinal, one of the most prominent figures in the contemporary Catholic scene. At the turn of his ninety years, the Cardinal still maintains his indomitable spirit and continues the battles that have seen him engaged throughout his life. The Cardinal is well understood by reflecting on something he told me some time ago, a little jokingly (but not so much), when he complained to me that he no longer had the energy to make long speeches of five hours but, he added sly, he still had to make four hours. There is much of the Cardinal’s fighting spirit in this and if one thinks that old age requires a certain restraint, then one must assume that he has not aged.

Everyone knows his public side, the struggles for the freedom of the Church in China, civil strife in Hong Kong, dissatisfaction with Vatican diplomacy in Chinese affairs. Of course, the Cardinal is all this, but for those who know him closely he is also something else, he is a person of great simplicity and approachability, a person of great sympathy.

The first time I met him I was impressed by one thing in particular: the way he spoke Italian. He spoke it and speaks it almost without an accent, which I then explained to myself by learning that since his early adolescence he had been accustomed to speaking our language in the Salesian house in Shanghai where he entered as a postulant. He still remembers with emotion his father Carlo Braga (now a Servant of God) who was a shining figure towards the priesthood, a path in which he has now been involved for more than 60 years. A path that has led him to remain firm in the face of the freedoms threatened in the Church in China, where a para-Church manages religious activities in the name of the government, marginalizing (or worse) those who choose loyalty to the See of Rome.

So he also had to stand up in the face of the impressive changes in his Hong Kong, where since 2019 the clash between democratic forces and the government establishment has intensified, which has led to the implementation of a new law on national security that makes it very difficult to exercise any kind of criticism of the institutions. The Vatican’s reaction, as mentioned above, was not considered as adequate by the Cardinal, who saw it as a demonstration of compliance with the Chinese government’s religious claims.

Again, obviously one is struck by the public face of his business and this is clearly understandable, yet his private part is the most interesting, that sense of friendship that the Cardinal certainly cultivates. If one has the opportunity to be with him among his confreres in the Salesian house in Hong Kong, one realizes that the Cardinal behaves like a Salesian among Salesians, nothing reveals his ecclesial dignity and this is very beautiful. It never makes you weigh the purple, although it comes naturally to you to respect that dignity in a man who wears it almost like armor.

This is because the Cardinal well embodies what it means to be balanced. Many accuse him at times of not being balanced, but he is, at least in the sense given to this word by the Brazilian thinker Plinio Corrêa de Oliveira: “Balance is not the position of a man sitting calmly in an armchair. The true equilibrium is that of the rider on his horse, while he realizes all his potentialities with the utmost intensity “. If you know the Cardinal a little, you would not imagine him sitting calmly in an armchair, but certainly we can imagine him engaged in those battles that must be fought to defend his God, his Church, his people.