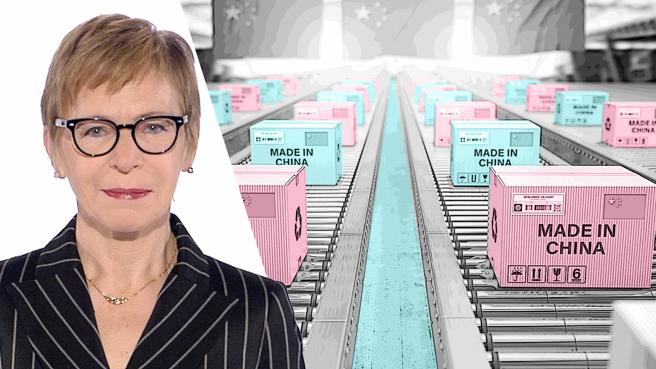 Twenty years ago, in 2001, China’s Gross Domestic Product (GDP) was $ 1.339 billion. That same year, exactly on 11 December, the country achieved the goal it had set for itself for fifteen years: joining the WTO, the World Trade Organization. 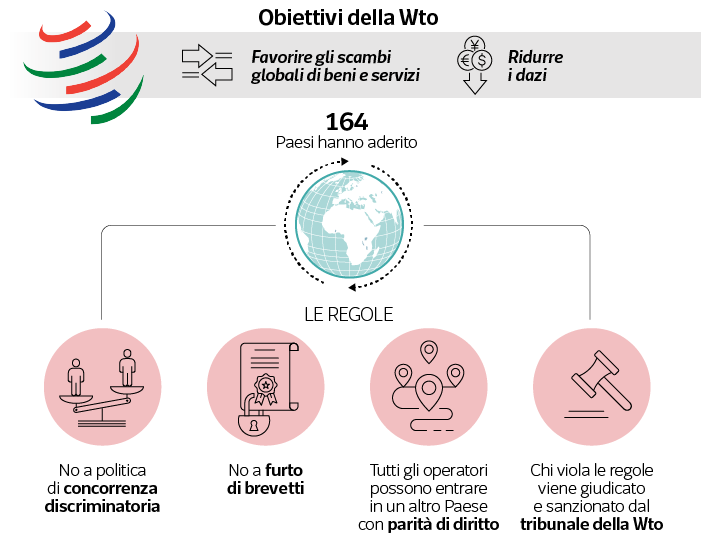 That is, to be admitted to the international trading system based on rules and with advantageous tariffs. The result that in 2021, China’s GDP will exceed 15 trillion dollars. That 11 December was a turning point: it shaped the twenty-first century. Positive and negative. Today, the problem facing market economies and democracies. 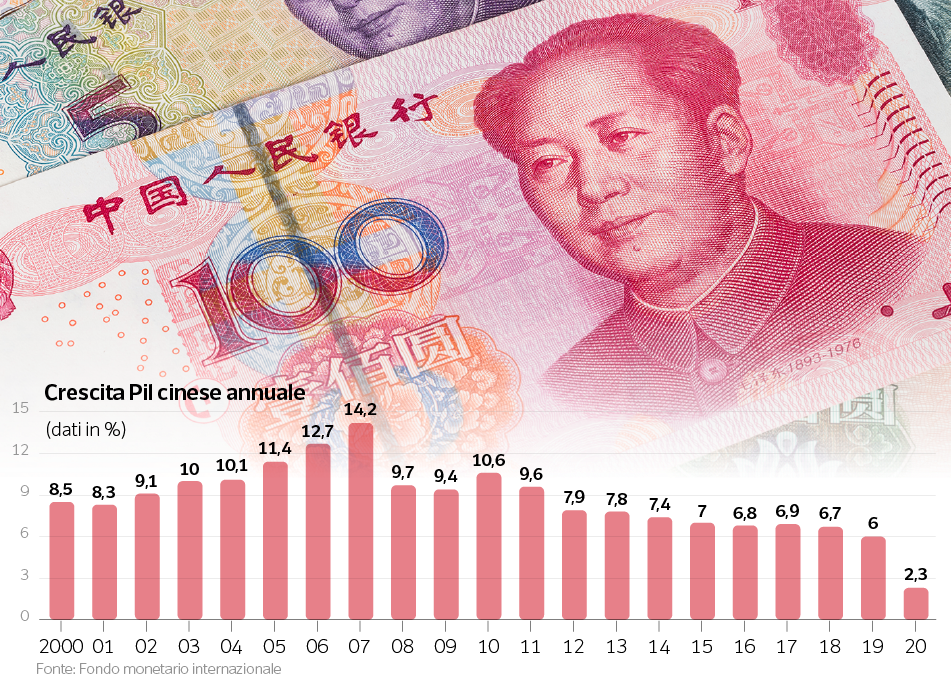 The reasons for a turning point

In the spring of 2000, the US Congress gave its green light to Beijing’s acceptance into the WTO. A historic step – commented the then President Bill Clinton – towards the continuation of prosperity in America, reform in China and peace in the world. In May of the same year, the EU also reached an agreement with China which opened the way for the Organization. And so had all the members of the WTO. The Dragon Goes Global was the comment of trade and international politics experts, eagerly relaunched by the world’s media. The idea was that bringing the then fifth-largest economy on the planet into the shared trading system would help it grow further, push it to reform in the free market sense, correct its anti-competitive practices and inevitably pushed towards political openness.

The benefits for consumers

From a macroeconomic point of view, Chinese entry into the WTO facilitated a boom in trade and a shift of the core of manufacturing activity from the Atlantic to the Pacific. The process was already underway, both due to the emergence of other Asian economies in the postwar period, and to the opening of China to the world by Deng Xiaoping in 1978. But the Asian giant’s entry into the Trade Organization meant that it would benefited from better tariffs for its exports, in exchange for lower import duties and compliance with a series of rules. The benefits for the rest of the world there have been. First of all for consumers, which they have seen arriving in their markets made in China products of all kinds at low prices. Secondly for multinationals, which they had the opportunity to enter a continuously growing and potentially enormous market: in electronics, American and Japanese companies; in the auto sector, the Americans, the Germans, the Japanese, the Koreans; in fashion and luxury, made in Italy but also the French and the Americans; semiconductor and advanced technology manufacturers. China has thus gradually become the factory of the world and an unprecedented expanding market. 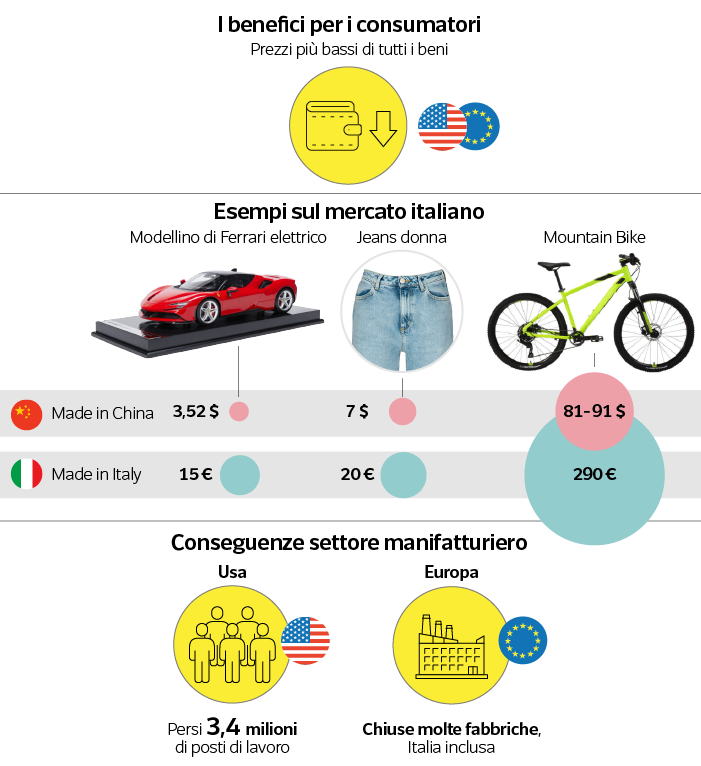 The benefits for China

Since 2001, Chinese exports to the United States have increased from $ 100 billion to $ 540 billion (2018). The European ones from 80 to 383 billion euros in 2020. China exported at a hellish pace and posted extraordinary balance-of-payments assets. Meanwhile, poverty has decreased in the country and President Xi Jinping can say that he has eradicated it: less than 1% of Chinese live below the line indicating absolute poverty, $ 1.90 a day: in 1990 the share was 67%. In the 1980s, there were virtually no private companies in China, but their number has exploded since the late 1990s and today in the cities they account for 85% of employment and for all the new jobs created. Since 2001, the income of urban households has increased by 431% (more than 60% of the urbanized population). 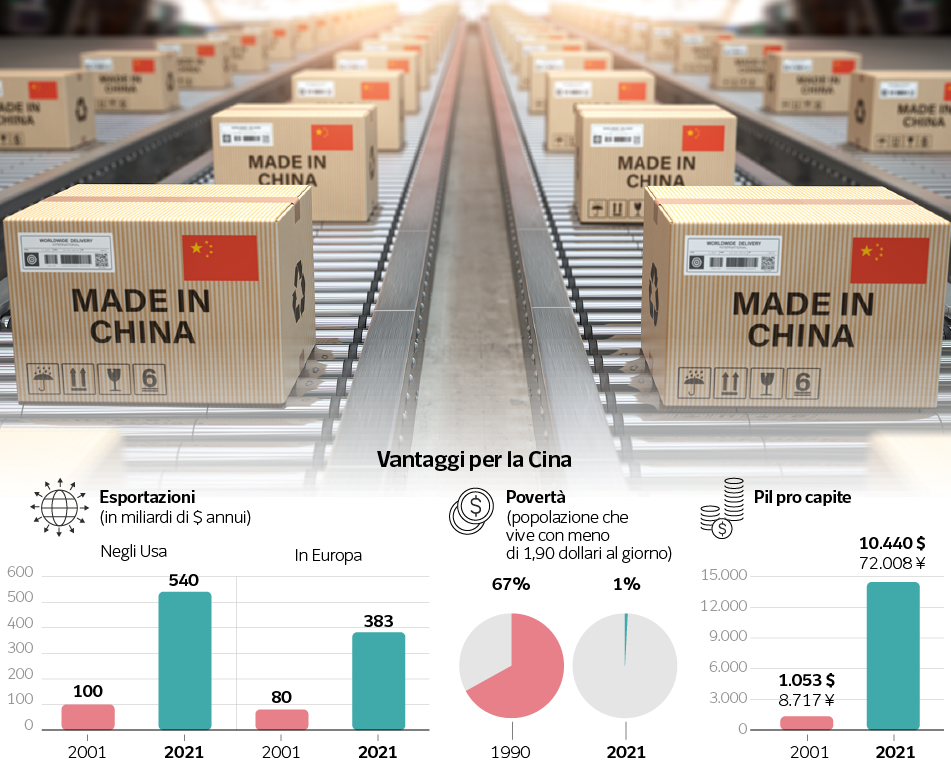 US and EU: millions of jobs lost

At the same time, the change induced by the elephant’s entry into the room destabilized the previous reality. There is an open debate on the effects on employment caused by the arrival of China in the global economy. A number of studies, mostly American, have calculated that the impact was substantial. One, led byEconomic Policy Institute, has estimated that since Beijing joined the WTO in 2017, Americans have lost 3.4 million jobs. 74% of which in the manufacturing sector. Basically, much of what was previously produced in the United States emigrated to Chinese factories, at lower costs even when calculating the logistics. The same, albeit to a less extreme extent, was true of Europe. A study by Stanford University researchers, however, argued that in predominantly manufacturing areas there have been factory closures, but in areas with predominantly skilled labor there have been employment gains. A reallocation, in short: multinationals have transferred jobs to China, but have created high-quality jobs at home in services, in management, in wholesaling, in research. In Italy, on the other hand, home of small and medium-sized enterprises, the loss of jobs was to a greater extent.

The fourth China International Import Expo of May 2012 in Shanghai

When China joined the WTO, it pledged to adapt its economy to the rules and trade practices of free-market countries. But analyzes carried out this year, in view of the twentieth anniversary of December 11, 2001, have established that Beijing is not moving in the promised direction. The Information Technology and Innovation Foundation – an American non-profit think tank – drew up the list of commitments made then and not respected. Here they are: China has not embraced market-oriented policies; it does not treat foreign companies like domestic ones; state-owned enterprises have not reduced their weight in the economy, especially in the technology sector; state-owned enterprises do not make acquisitions based on commercial but often political logic; public subsidies to industries have not been reduced and information on these state aids is not given in a timely manner; to operate in China you have to sell technology to a Chinese partner; infringements and theft of intellectual property have not decreased significantly; technological standards continue to be not transparent and in line with WTO rules; competition policies are still conducted in a discriminatory way; public procurement agreements have not been ratified; the information technology market has not been open to foreigners; the distribution of audiovisuals has not been liberalized; foreign banks continue to not be treated equally as domestic ones. 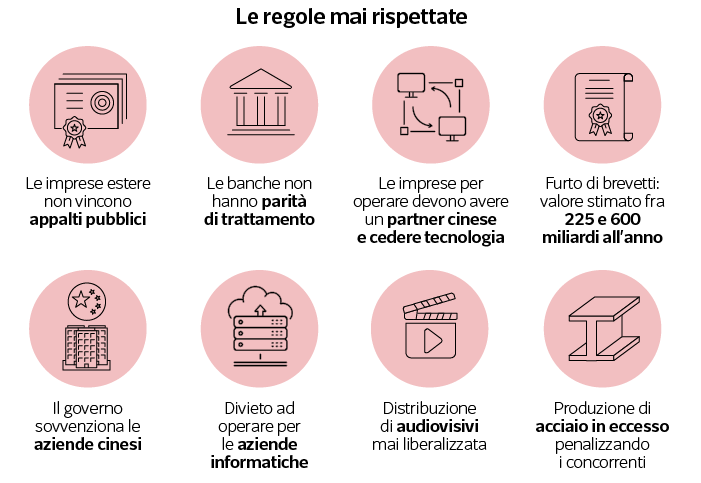 The second thoughts of the European Union

This year the EU has stigmatized the fact that Beijing does not have, unlike what was promised, opened the digital and agricultural markets, continued to produce an excess of steel (subsidized) – which puts foreign competitors out of the market – and continued to give state subsidies to its businesses. At the end of 2020, under the German presidency, the EU signed an investment agreement with China, much desired by Angela Merkel, much opposed by Washington and some European partners. Since then the deal ended in the sand and hardly come back to life. Today the EU’s position towards China is becoming more and more aware of Beijing’s economic improprieties, and how dangerous they are for international trade and politics.

Today the EU’s position towards China is becoming more and more aware of Beijing’s unfairness in the economy, and how dangerous they are (…)

The renunciation of becoming a market economy

Last October, representatives of the 164 countries at the WTO held an evaluation meeting twenty years after China’s entry in the WTO. Out of 50 interventions, the majority criticized Beijing. The United States and other countries have accused it of undermining the rules-based global trading system. US Representative David Bisbee said the expectations of twenty years ago have not been fulfilled and China does not appear to have the inclination to change. Nor can we ignore reports of Beijing’s use of forced labor in numerous sectors. When he joined the WTO, the agreement was that China would be formally declared a market economy after 15 years. It is important, because anti-dumping measures can be taken automatically against a country that is not a market economy, that is, against the sale of products below cost. In 2015, therefore, Beijing asked to be defined as a market economy. But the US and the EU refused to see it as such, given its heavy state aid to businesses. Xi Jinping’s China persisted for a while, then in June 2019 it gave up on getting the status before a decision was formally made by a WTO panel. In other words: the Chinese know they are not a market economy.

In 2000, of the 500 global companies listed by Forbes, 27 were Chinese; today there are 124, of which 91 financed by the government and directed by the party. been accused by the court 44 times: on the limits on Rare Earth exports, on technology transfers, on the infringement of Intellectual Property, on subsidies to aluminum producers. For from 2020 the court froze: Trump has blocked the appointment of expired judges and Biden does not seem to have plans to appoint them.

That China is now fully integrated into the global economy and trading system is an incontrovertible fact. equally undeniable that with the rise to power of Xi Jinping in 2012, it has become increasingly clear that Beijing aims for a world where China sets the rules commercial, investment and competition. In fact, in this situation, the WTO is powerless, with the second largest economy in the world not following its rules. Washington and partly the EU indeed they consider the Organization, as it is today, no longer authoritative and not even useful.