Cryptocurrencies have become an increasingly popular asset class among retail and institutional investors.. Although initially considered a fringe asset class, its increased adoption across countries, particularly in emerging markets, amid bouts of extreme price volatility has raised concerns about its potential implications for financial stability.

In September 2021, for example, Bitcoin and Ether ranked in the top 20 traded assets in the worldcompeting with the market capitalization of some of the largest companies in the world.

Due to the fact that prior to the pandemic, the US stock market had marked a clearly upward trend since the appearance of cryptocurrencies, it was difficult to assess how these assets behave when the market tide behaves violently and great volatility appears. Today there are already studies, such as the latest one prepared by the IMF, which give a broader vision of the existing correlations between the stock market and cryptocurrencies.

As the market capitalization of crypto assets, in particular Bitcoin, began to rise in 2017, its price showed little correlation with major stock price indices, such as the S&P 500 index.

However, this seems to have changed since the second quarter of 2020as Bitcoin and US stock prices have risen against a backdrop of easy global financial conditions and heightened investor risk appetite.

However, since June 2020, the correlation has skyrocketed, with the price of crypto assets rising 16% in Q3 2020, once again diverging from the S&P500, which was up 7% in the same period. During the last quarter of 2020, the correlation continued to rise with Bitcoin up 38% and S&P500 up 11%. With a current correlation of 0.36, Bitcoin and SPX show a significant correlation in the positive direction, suggesting that Bitcoin may be starting to act as a riskier asset..

A positive correlation means that when the stock market falls the crypto market will follow and vice versawhich gives us to understand that it does not work as an active shelter. The rise in correlations between crypto assets and equity returns since 2020 has been much more pronounced than for other key asset classessuch as the 10-year US Treasury ETF, gold, and select currencies (euro, renminbi, and US dollar). 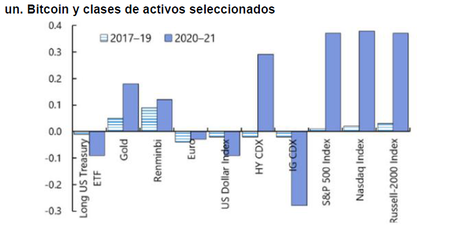 The correlation with corporate bonds has also increased significantly and, as tends to be the case with risky asset classes such as stocks, it is positive with high yield bonds and negative with investment grade bonds for Bitcoin and Ether.

Cryptocurrency price movements also seem to have correlated more with the misalignment of US equity prices compared to pre-pandemic years, suggesting that perhaps an excess of optimism on the part of investors may be contributing to the rise in their prices.

Cryptocurrencies in the crosshairs of regulators