the cuban boxer Robeisy Ramirez (9-1, 6 KOs)“The Train”, made an electrifying stop in Glasgow, the capital of Scotland, to take an impressive victory against the Irish fighter Eric Donovan (14-2, 8 KOs) in the featherweight division, on a very successful Saturday day for Cuban boxing, as six other boxers won their respective fights held in Dubai. 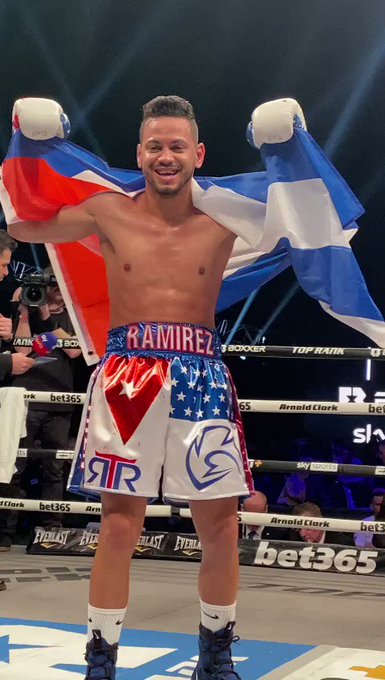 It may interest you: SKINNY AND INJURED, but HE SIGNED: Incredible story of a Cuban major leaguer

The fighter born in Cienfuegos 28 years ago, struck down his experienced 36-year-old rival with a technical knockout in the third round of the fight, after effectively connecting a left hook, thus adding his ninth online win as a professional. after the setback suffered in his debut in 2019.

From the very first round, Robeisy tipped the scales in his favor, showing excellent defense and hitting Donovan’s anatomy almost at will, who received a protection count just in the second minute of combat.

It may interest you: “I didn’t have anything to give my mother on December 31,” CONFESSED a former player from Industriales who left Cuba

«He came to show the best part of Robeisy in boxing. I’m already getting used to this professional boxing and the result was seen. I am very happy to return to the UK and fight in a stadium full of people. Thanks to all the fans.” “El Tren” said after the end of the fight.

“We knew Donovan was a great fighter, but we made a great camp for this fight. I am happy to have done the job we wanted to do,” added the Cuban boxer, two-time Olympic champion (London, 2012 and Rio de Janeiro, 2016).

With this victory, Robeisy sent a strong message to world boxing about his willingness to face greater endeavors in professionalism.

Six Cuban boxers won in Dubai, in an evening that saw Rigondeaux fall against Astrolabio

A total of six Antillean boxers sealed their respective presentations with victory at Marina Dubai, capital of the United Arab Emirates, the same billboard in which the veteran boxer Guillermo “The Jackal” Rigondeaux (20-3, 13 KOs) disappointed his followers again and was defeated in the bantamweight division by the 25-year-old Filipino Vincent “Steel” Astrolabe (17-3, 12 KOs)an opponent who seemed ideal for the resurgence of the Cuban.

It may interest you: DISAPPOINTED Guillermo Rigondeaux and the defeat was UNANIMOUS

In the welterweight division, the 21-year-old Cuban fighter Yan Marcos (5-0) he was better in eight rounds than the congolese Mardochee Kuvesa Katembo (13-6-1, 0 KO)while in the light ones, Armando Martinez (5-0, 5KO) beat the Tanzanian representative by KO in the sixth round, Jackson Malinyingi (11-6-1, 3KO).

In the same way, they left through the wide door Dayan Gonzalez (3-0, 2 KOs)who at 22 years old surrendered by KO in the opening round to the Egyptian Mostafa Elhamy (1-1, 0 KO)as well as the debutante Alexei Guibert (1-0, 1 KO)winner by KO to Habibu Pengo (15-6-2, 6 KOs) from Tanzania, achieving his first success as a professional boxer and facing a more road rival.

It may interest you: “Get ready that you are the center field of the CLASSIC”, the incredible PREDICTION of the father of the Cuban major leagues