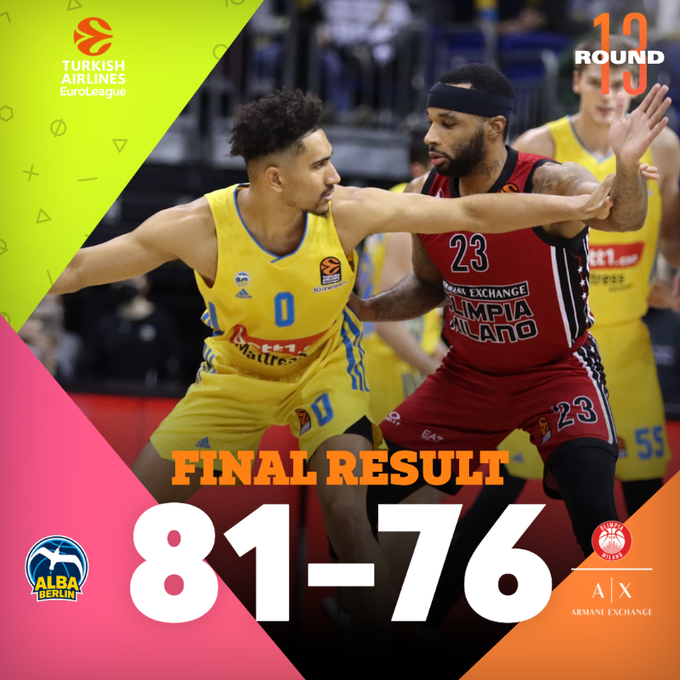 Fourth knockout in a row in the EuroLeague for Olimpia Milano. In Berlin, Ettore Messina’s team is dominated by rebound, falls to -17, but if it has the merit of getting up to Shields’ equalizer, it fails to solve the problems that have emerged in recent weeks.

Alba has an easy game for three quarters, closing the perimeter and bombing in turn from a distance, dragged by Marcus Eriksson and Maodo Lo, taking advantage of the many second chances built by the long department.

With Nicolò Melli still punished by fouls at the start, and with a Ben Bentil inevitably half-serve (however positive), the Messina team has no consistency except with Kyle Hines: 81-76 at the end.

Milan starts with an extremely perky Melli, 5 points and 2 offensive rebounds, but after Delaney’s triple Sikma warms up, and with the third foul of his captain the partial 8-0 Alba (6 by Koumadje) starts for the 19- 10 of maximum advantage that imposes the timeout in Messina with 2.58 to play. 19-15 at the end of the first quarter, 2 points and 3 rebounds for Ben Bentil at the debut 3/11 from 2 for Milan, 3/7 from 3.

Disastrous start of Milan that collects another 6 points from Eriksson (arrives at 5/6 from 3), defends little and badly and wakes up to 60-43 with 6.26 of maximum advantage. Eriksson reaches 19 with a science fiction basket, Melli tries to send a message to his teammates, Chacho finds the partial which is worth 62-52 which forces the home coach to timeout at 2.15. Tamir Blatt puts a crucial triple at 1.20 for the +13 out of balance, 67-56 after 30 ‘.

Hall’s basket and foul, Chacho’s triple: 69-62 Milan after 2 ‘, and the Messina team believes in it, especially the Spaniard who misses the next triple, but steals the ball in defense by sending Datome into one against Zoosman, but for referees is not unsportsmanlike: 2/2 for him and 69-64. Sikma misses two triple feet on the ground, Delaney enters who finds Hines’ -3. At 5.43 the 2400 for Alba expires, and then Eriksson returns to the field. Delaney, with the game broken, finds a foul on a 3-throw from Lo: 2/3 for him and -1 at 5.22. Sikma is not wrong on the third p & p, Alba continues to have second chances, like the one that rewards Olinde’s bomb for 77-72. The 37-22 says a lot, Milan at 3 ‘seems to break down again and lose the thread, Hines preys on a crucial rebound and supports the 77-74, then recovers the ball which however sees the bomb like Hall dancing on the iron. Shortly after the winger supports the -1 (1.27), but spends a foul on the access bonus after a block received and Eriksson. Shields misses the forced triple of the draw, and Lammers hits with the 81-76 bomb that closes the match.