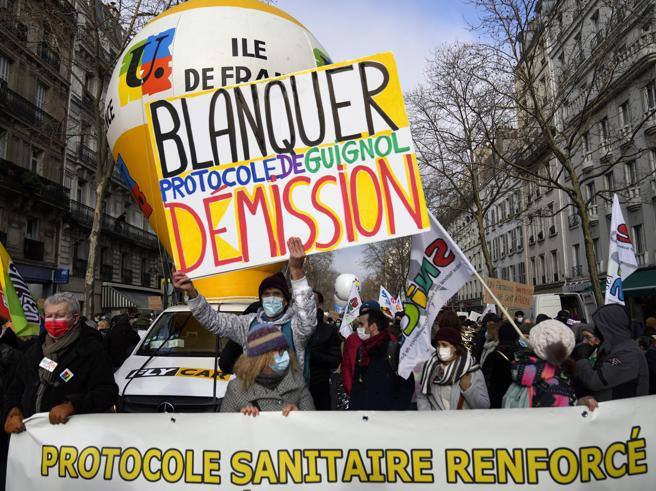 from Stefano Montefiori, correspondent from Paris

In the sights of the teachers, the Minister of Education Blanquer and the whirlwind of rules for returning to class: three different ones in a single week

Thousands of teachers across France took part in the strike called to protest against the handling of the pandemic in schools. The discontent stems from the measures taken by the government to tackle the health crisis “by keeping schools open”, a priority set by President Macron immediately after the first lockdown. The anger is mainly directed at the Minister of National Education, Jean-Michel Blanquer, who announced a new health protocol the afternoon before returning to class after the Christmas holidays (January 3), and then showed contempt for the protesters: “You don’t go on strike against a virus.” The banners explained that “we are not striking against a virus but against Blanquer,” whose resignation was called for. Within a week, the rules were changed three times, wreaking havoc in schools and families.

The protocol currently in force provides that when a student has Covid, classmates under the age of 12 must undergo three self-tests according to this scheme: the same day, then two and four days later. As long as the tests remain negative, pupils can enter the classroom.

Teachers are asked to verify the complex self-test system which, moreover, have a reduced reliability. In recent days, Minister Blanquer clashed with his colleague from Health, Olivier Véran. In the background, the doubt that in order not to close the schools the government has decided – without saying it – to let the Omicron variant circulate, more contagious but less lethal.

In Paris, the demonstration saw the participation of some members of the left, who support the strike and are traditionally close to the world of school. But the mayor of Paris, Anna Hidalgo, presidential candidate of the Socialist party, was booed and accused of being co-responsible for the disaster because “the left has abandoned the teachers”. As for Jean-Luc Mélenchon, candidate of France Insoumise (radical left), he accused Minister Blanquer of having “half-demolished the school but managing to get everyone to agree against him, congratulations”. Prime Minister Jean Castex received the representatives of the teachers’ unions in the evening and could announce new measures that take into account their requests in the coming hours.