Google celebrates today and tomorrow its annual event for developers, the Google I/O. We can describe it as a mirror of Apple’s WWDC, and it reveals important news about Android and the services of the Mountain View company. and in the first key note of the event Google has decided to throw down the gauntlet to Apple in a not exactly discreet way.

“We hope that other systems will adopt it”, ahem, ahem 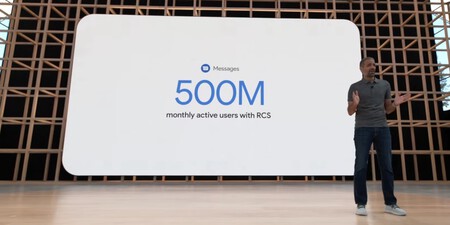 The Google challenge turns around RCS, the messaging standard that seeks to unify the experience of platforms and applications around SMS. In Cupertino they were considering it a few years ago, but there has been no more news about it. And it is logical, taking into account what has been achieved with iMessage and that my colleague Javier Lacort explains very well in our daily podcast:

In the United States iMessage is wildly popular, and the color blue in conversations is even a status symbol. It means you have an iPhone, “not like those Androids with their green messages“. A standard like RCS would eliminate that color difference.which might not motivate young people so much to buy an iPhone.

Google knows this perfectly, and in its key note they have boasted of already having more than 500 million monthly active users of RCS from Android. After announcing this information, and in a very clear allusion to iOS, it has been said: “we hope that all mobile operating systems will get the message and switch to RCS”. Few doubts remain when Android only has iOS as a serious competitor. You can see the moment when they throw the taunt at minute 2:28:10 of the video of the key note.

The public has laughed and applauded, throwing the ball to the roof of Apple Park. Will we ever see an iMessage that works well with RCS? I am skeptical about this, although the European DMA bill may end up forcing this change. No matter how many cracks your plan has.