Yasiel Puig continues to flex his might frequently in the 2022 Korea Baseball Organization (KBO) season, his first on the Korean circuit. On the day of this Tuesday, the Wild Horse gave a full turn stake in the Kiwoom Heroes 8×5 victory against SSG Landersa huge hit that disappeared to the farthest reaches of center and left field.

Puig had only one hit in three legal at-bats, but it was the long drive in the second inning that brought in his club’s first run in Tuesday’s win. Overall, he went 1-for-3, with the home run you’ll see below, an RBI (for eight in the tournament) and two runs scored. His offensive line is .278/.400/.481. 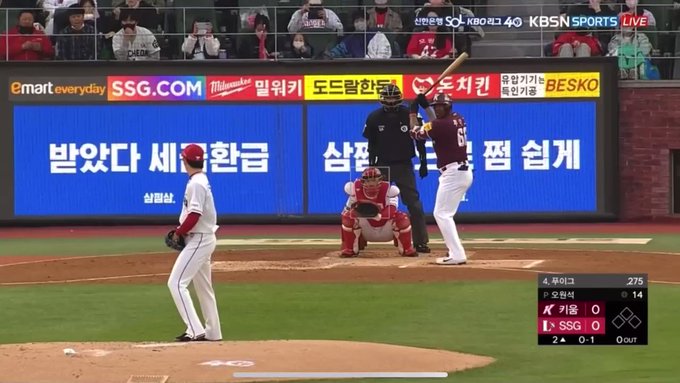 With this home run, Puig reached three gunshots on the Korean circuit, the second highest mark of the season, below the four accumulated by Kim Hyun-soo and Han Dong-hee. In his last eight games, Yasiel hits a .323 average with the wood, product of 10 hits in 31 legal trips to the home plate.

Also in the KBO, José Miguel Fernández appears to have found offensive consistency again. As the third batter in the Kia Tigers’ 6 × 3 loss against the Doosan Bears, Fernández hit a pair of singles in five valid chances with his bat and struck out in one of them. So he ended up batting .304 on average, with a .333 OBP and a .339 slugging percentage.

But such is the offensive rhythm of the excellent Cuban slugger who has at least one hit in nine of his last 10 games played, a period in which he averages .325 (thanks to 13 in 40 official at-bats). Fernandez has 583 career hits in Korea and is just 17 shy of 600 in his four-year career.

Turning to what happened in Nippon Professional Baseball (NPB), Yurisbel Gracial drove in one of the three runs needed by the Fukuoka SoftBank Hawks to win 3×0 against the Buffaloes Orix. Gracial went 1-4, with RBI (5) and his first stolen base (a batting average of .215).

His teammate Liván Moinelo was fine on the mound, with 1.0 perfect innings and a strikeout, to lower his ERA to 1.13 after eight appearances. Opponents are batting just .077 against him.

Finally, Leonys Martín went blank in three boxing trips, with a couple of strikeouts, in the Chiba Lotte Marines’ 4×0 loss against Saitama Seibu Lions. Thus his average decreased to .148.

Remember that this and all the summaries involving Cuban players can be found by following this link, that is, clicking here.