Despite the high dose of volatility, the confidence of Italian investors in cryptocurrencies remains high. This is what emerges from the data released by eToro, the investment platform that counts further 23 million registered users.

The numbers for the third quarter confirm Bitcoin at the top of the choices of users registered on the multi-asset platform in Italy, while Cardano, thanks to an increase in positions of 20% quarter on quarter, displaces Ethereum from second place (+ 1%).

While Bitcoin retains the largest market capitalization, the growth rate is experiencing a marked slowdown.

Similarly to what happened in countries like the United Kingdom and Germany, in the third quarter the Bitcoin’s growth rate in the portfolios of Italian users on eToro it stood at 5%.

“The last quarter saw profound changes in the crypto world. We have gone from a real bull run to a slightly more circumspect market, with developments such as the recent decision by the China to ban crypto transactions, which generated some uncertainty, ”commented Simon Peters, eToro’s crypto market analyst.

“In any case, there were also important news like Cardano’s Alonzo hardfork and Ethereum’s London upgrade, which added features and scalability to both networks – which meant a few months of intense activity for developers and investors alike. “

Dogecoin down one position

Again with regard to Q3, the Dogecoin he lost one position to fourth place. Instead confirmed XRP, TRON and IOTA in fifth, sixth and seventh place respectively.

“It is interesting – continues Peters – to see how the question moves. Both ADA and ETH have seen network upgrades, but for one the demand has increased, for the other not to the same extent. The most important trend takes place outside the top five, with the lesser-known coins recording the greatest growth as investors are looking for value ”. 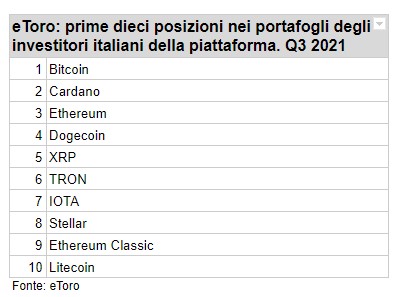 The largest movements in the third quarter concern Algorand (869%), Polygon (470%) and Basic Attention Token (359%) with Italian investors looking for the new bitcoin. The new alt-coins added to the platform have seen strong demand, with Shiba Inu debuting in 15th place, Enjin in 26th and Maker in 29th.

“Although most of the press headlines continue to focus on BTC, ETH and ADA, the major movements in fact we see them on the lesser known coins. Some investors believe that holding whole tokens or coins will perform better than owning a fraction of Bitcoin – prompting them to research similar assets such as Polygon or Algorand ”.

In essence, the crypto universe is expanding at an increasing rate with more and more coins, tokens and use cases that keep coming to light.

“Although some investors will choose to remain loyal to the largest and most consolidated crypto-assets, I have no doubt that we will see more and more of them in the future. diversify your portfolio with alt-coinsPeters concluded. 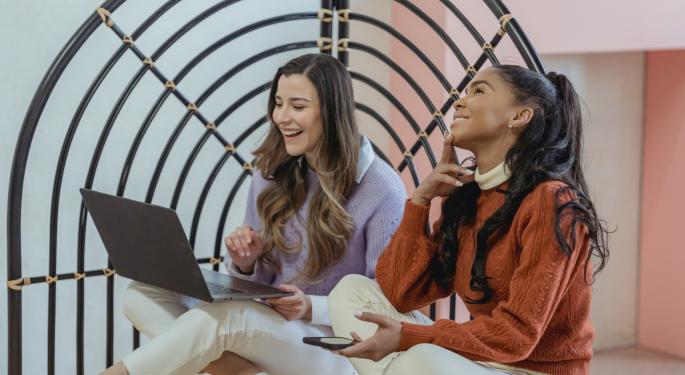 A new generation of digital financial services is upon us

George Clooney, the new project is a public film school for minorities