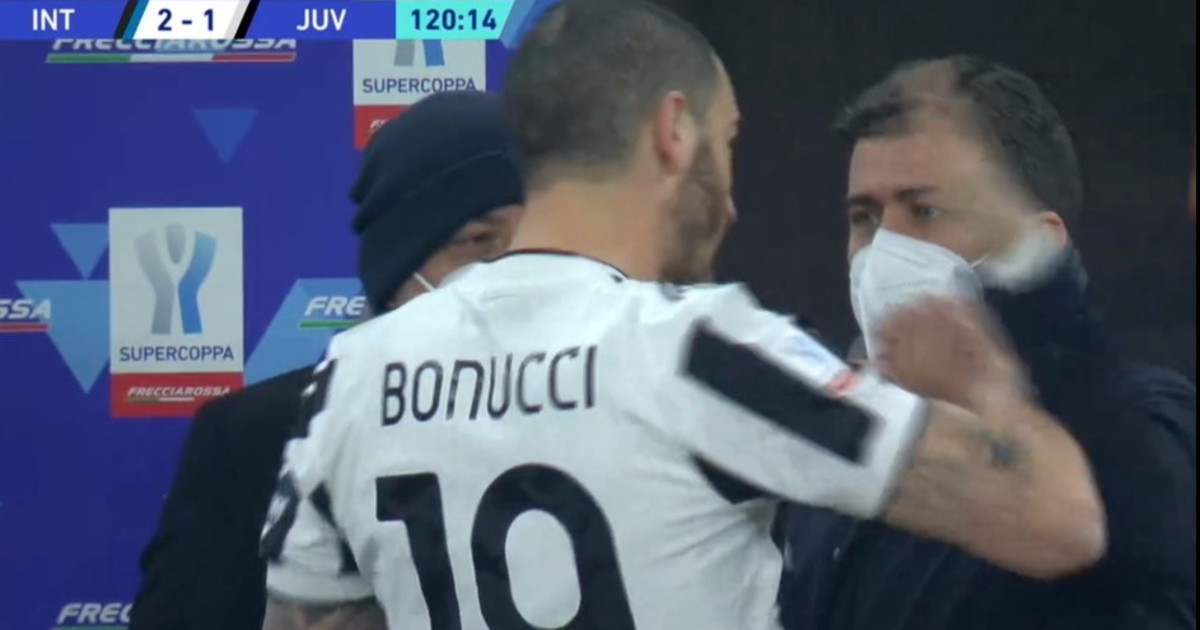 Juventus no longer knows how to win and the Bianconeri’s nerves are put to the test. First Max’s outburst Merry against the referees at the end of the match at home with Napoli on January 6, then the sensational fight of Leonardo Bonucci Wednesday at San Siro with the general secretary of Inter Cristiano Mozzillo.

The European champion defender lost his head to the Nerazzurri’s exultation at the goal of Sanchez who decided the Super Cup, lashed out at the manager of the rivals but got away with a 10 thousand euro fine decided yesterday by the Sports Judge.

The sentence leads to discussion, given the report sent to the judge by the federal inspectors present in Milan. According to what was reported (and shown for a few seconds also during the live broadcast of the match on Mediaset), that of Bonucci it was a physical and verbal assault. The blue defender was waiting on the sidelines to be able to enter from the bench in the final seconds of extra time (Allegri wanted him to take a penalty), but his teammates have seen fit to give to Sanchez a sensational assist for the winning goal. The Inter bench has “exploded”, including Mozzillo who rejoiced raising his fists to the sky. At that point Bonucci approached him and, according to the report, he pushed and jerked the Nerazzurri secretary, hitting him several times with fists between the neck and shoulder. “What the … are you doing, you don’t have to cheer on my face, I’ll kill you” would be the words addressed by the Juventus central to Mozzillo who, surprised by the reaction, retreated. Then Bonucci’s comrades thought about settling the quarrel and everything ended there without consequences. The rest was done by the judge, who did not disqualify the defender, who is now regularly available to play Juventus-Udinese tomorrow in the league.

From the report of the federal inspectors present at Allianz Stadium on January 6 it turns out instead that Merry, at the end of the match with Napoli closed amidst the black and white protests for the missed corner, he ran towards the referees’ dressing room, shouting at Andrea Gervasoni, now deputy commissioner designating CAN of Serie A and B and present in Turin that evening: “He’s a cogl … tell him – Allegri’s words referring to the referee of the match Simone Sozza – head of c … he has to recover 12 minutes, not 5. You let yourself be taken by the c … they were always on the ground, they did the Neapolitan dramas. That’s enough now, even if they disqualify me for three months ».

Not satisfied, Allegri waited for the referees to leave the locker room and directly increased the dose with Sozza: “You’re a cogl … I don’t let myself be taken for the c … by a cogl …”. In this case, the coach paid with a single day of disqualification, already granted against Roma.