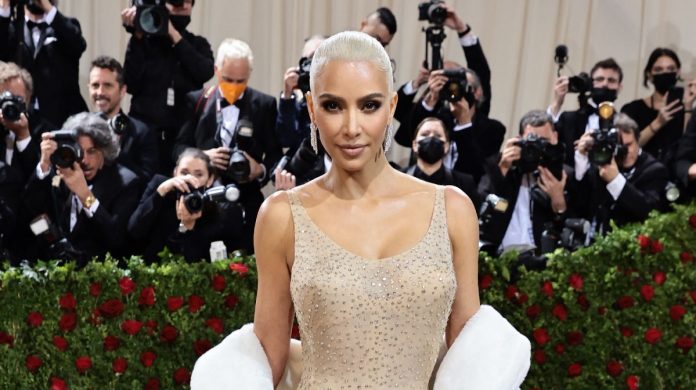 The American model Kim Kardashian did not damage the historic Marilyn Monroe dress that she wore last May at the Gala of the Metropolitan Museum of New York, according to a statement from the firm that lent it to her, the franchise Ripley’s believe it or not!.

Scott Forner, who claims to have the largest private collection of Monroe’s files and personal items, shared photos on his website and on social media comparing the state of the dress “before and after” that Kardashian put it on to attend the exclusive event that It is held every year in New York.

And their verdict was that the piece had “permanent” damage.

“Kim Kardashian’s walk down the steps of the Metropolitan Museum at this year’s Met Gala caused quite a stir, but one thing Ripley’s believe it or not! can say with confidence is that it did not cause damage to Marilyn Monroe’s famous ‘Happy Birthday’ dress from 1962,” the firm that owns the outfit said now.

This firm says that it was not the first owner of this dress and that it was purchased at a Julien’s Auctions event in 2016 for $4.8 million.

Since then, “As a private company, Ripley’s has displayed the historic dress at various of its attractions around the world. The company understands the risks associated with this,” he added.

“From the bottom of the steps at the Met (Metropolitan Museum), where Kim put on the dress, to the top where it was returned, the outfit was in the same condition it started out in,” said the vice president of publication and Ripley`s licenses, Amanda Joiner, who guarded the dress the day of the Gala and during the transport from Orlando to New York.

The dress is practically the history of the United States and pop culture, as it was the one Monroe wore when she sang “Happy Birthday” to then-US President John F. Kennedy in 1962, just a few months before the actress’s death.

In order to wear the outfit, Kardashian, 41, had to undergo a diet with which she says she lost more than 7 kilos in three weeks and barely had the dress on for a few minutes.