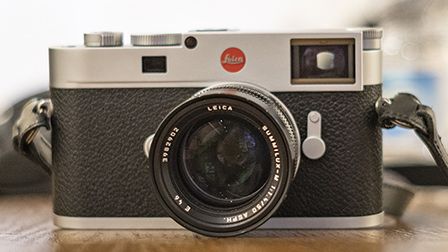 The presentation of a ‘M.It is always a very sensitive time for Leica. This 2022 opens with the launch of the new Leica M11, a product that unexpectedly it combines tradition and innovation as never before.

The German technicians in Wetzlar have in fact made some very courageous choices in the design of the new rangefinder camera, a new digital tool to exploit (even better) all the optics in the history of Leica M.

Courageous choices, we said, and distributed both electronically, but also constructively. ‘Leica no longer takes you for a ride‘- you will forgive me for the joke (and I hope Dr. Kaufmann and all the Leica staff will forgive me too) -: one of the most important changes on the body of the new Leica M11 is the absence of the historic brass back, which had to be removed to access to the battery.

Leica now adopts the same mechanism successfully tested on the Leica SL, with an ‘exposed’ battery with double release system, using a lever on the body to pop the battery out and pressure to fully unlock it. Removed the battery also accesses the SD memory slot. Which introduces us to the second interesting innovation: if you want the SD memory card is not needed, the camera integrates in fact one 64GB internal memory.

Next to the battery another sign of modernity, the USB-C port, which can be used to connect the camera to PC and iPhone / iPad, but also to power the camera and recharge the battery. On the other hand, a very generous and accredited battery with a capacity of 1,800 mAh, with an autonomy according to CIPA standards of 700 shots, but which can reach 1,700 shots with a ‘typical’ use as a Leica user (who, for example, does not play with the menu for thirty seconds after each shot).

A small revolution that occurred for the inside of the camera, with the adoption of a new generation sensor, which for the first time ‘steals’ some of the advanced shooting functions from the world of smartphones and computational photography. We are in fact facing a 35mm full frame back-illuminated BSI CMOS sensor with a pixel pitch of 3.76 μm by 9528 x 6328 pixels, i.e. 60.3 megapixels. The ‘unprecedented’ calculation of the pixels testifies to the fact that the sensor was produced for Leica to its own specifications, but it is the sensor’s reading modes that tell the whole story.

Leica at the time of the press preview did not release exact details on the composition of the RGB matrix, but we know that the sensor can also operate in pixel binning mode, using the same technique that cell phones have been using for some time to improve sensitivity. TO 60.3 megapixels the sensor shoots in the traditional way, pixel by pixel we could say. At the resolutions of 36.5 And 18.4 megapixels, instead, the sensor couples several photodiodes of the same type.

From the slides of the presentation the structure would seem (as happens on mobile phones) of type Quad-Bayer (with blocks of 4 adjacent pixels of the same color) and for shooting at 60.3 megapixels the Maestro III processor applies a procedure of re-mosaicing, reconstructing a classic Bayer matrix. Leica has called this sensor management Triple Resolution Technology and basically states that the new Leica M11 ‘three cameras in one’: an ultra-high resolution 60 megapixel camera, a 36 megapixel all-rounder and an 18 megapixel ultra-low noise camera.

Thanks to its backlit structure, the sensor offers 60.3 megapixels greater dynamic range than the 41 megapixel Leica M10-R and can go up to 15 stops of dynamic range in 36 and 18 megapixel shots using pixel binning. The sensor is then covered with a UV / IR filter that allows it to be used with all the optics of Leica M history, even the oldest, with excellent color rendering.

The new Leica M11 ‘steals technology’ from even the latest digital cameras, with one Dual Gain technology at the pixel level, which allows you to take advantage of two basic amplification levels (as happens in Dual ISO systems): the result is a basic sensitivity of 64 ISO with a great dynamic range and a consistent color behavior and good resistance to increasing sensitivity, which can be pushed up to at ISO 50,000.

The Maestro III processor (the same as the Leica SL2-S), combined with the backlit sensor, give the Leica M11 a speed never seen before: both in terms of reactivity of the camera, both at the level of burst, which goes up to 4.5 frames per second, with faster file saving and buffer clearing. From the latest SL and Q series cameras, Leica M11 has also stolen thegreat menu, which we praised in our Leica SL2-S review. Simple and essential (I defined it very ‘German’) it allows you to manage the camera quickly and to easily find all the options for modifying the various parameters.

The changes to the camera body also make the new Leica M11 ‘the lightest Leica M ever’: this applies to the black version, with aluminum body, which weighs 530 grams in running order with battery installed. The silver version, on the other hand, is more traditional, with a brass body and weighs 640 grams. Among the concessions to modernity is the new optional 3.7 megapixel Leica Visoflex 2 electronic viewfinder, which can be tilted up to 90.

We have already mentioned the functions that meet the most modern photographers, those who live with the smartphone always coupled to the camera. Updated connectivity features for the Leica M11 will be made available via a new firmware version in the second half of 2022. It will provide us with enhanced connectivity capabilities to the new M11, to streamline users’ mobile workflows and enhance the Leica FOTOS app with the Ability to store location data, access images via Bluetooth connection and enable faster transfer speeds. Furthermore, as already mentioned, the Leica M11 is already an Apple-certified accessory Made for iPhone and iPad and, as such, it offers advanced connection functions with the Leica FOTOS cable supplied, for managing the camera as if it were an offshoot of a smartphone or tablet, paradoxically with more advanced functions than many other cameras on the market.

The Leica M11 will be available worldwide starting today 13 January 2022. The selling price of 8,490.00 euros, VAT included. It is a slightly higher price (200 Euro) than the Leica M10-R compared to a considerable technological leap and with all the characteristics of the Leica M tradition, including an unmatched second-hand value.

Leica M11 a Leica, a Leica M, with all the strengths and weaknesses of the system, but among all the Leica M. has taken the most advanced technological step and can represent a milestone like Leica M8 (the first digital) and Leica M9 (the first full frame). Leica M10 was the model of differentiation, Leica M11 the model of ‘all in one’. Considerations on the elite price (which makes many turn up their noses) aside, Leica really deserves a round of applause for this new M11 which, without abandoning tradition, has been able to introduce a technology on the sensor that no other photographic brand had hitherto had the courage to marry. Have you ever thought that the first camera to ‘steal’ the features of the most advanced photo sensors from smartphones would be a Leica?