With a cast made up of Viola Davis, Michelle Pfeiffer and Gillian Anderson, ‘The First Lady’ was selling itself. The Showtime anthology, which Movistar Plus+ premieres here, brought together the three actresses to recount the lives of two first ladies of the United States of America: respectively Michelle Obama, Betty Ford and Eleanor Roosevelt.

On paper, it must be admitted that it looked interesting -perhaps more for the American public- the being able to delve into the work and life of these figures, always in the shadow, for better and for worse, of their husbands. To do this, Aaron Cooley, creator of the series, emphasizes what characterized these women, contrasting it with the zeitgeist contemporary.

This is the thesis of the series: with the world of politics corseted, the first lady serves as an example of a certain social vanguard, at least in these three cases: the independent thinking of Eleanor; the openness and feminism of Betty; the resilience of Michelle in the face of racism and her fight for universal healthcare. And, almost what the three share, the little desire they have to be First Ladies (for different reasons).

All of this is explored by jumping not only from first lady to first lady, but also with in-character flashbacks. to influence at different times of both their lives and the political careers of their respective husbands.

This succession of scenes is often more like an anecdote or diary entries —for example, a scene of Eleanor finding a secret room— that don’t do much more than fill footage. This, together with the forced parallelism and the continuous jump, means that there is no sense of creating a story.

When ‘The First Lady’ more interested is when he enters their lives. However, the anthology is more often concerned that these serve as a lens to review historical moments than to delve into its protagonists. 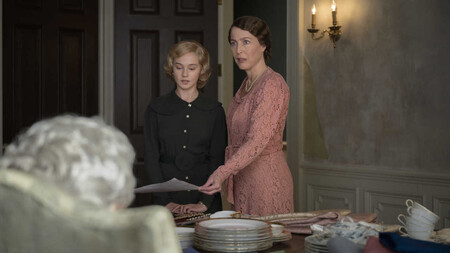 Which is wasting the cast they have. Not only the feminine one, where they are exquisite – little surprise to see Anderson’s mimicry with the precedent of his Thatcher – but also the masculine one, where perhaps the worst is OT Fagbenle as Barack Obama. But of course, there we have Kiefer Sutherland and Aaron Eckhart.

It is surprising, in this era of prestigious series (although it is more on an aesthetic level in many cases), that ‘The First Lady’ seems closer both in script and direction to a telefilm desktop more than a fiction of a premium channel like Showtime that, on the other hand, needs a good push.

It helps this perception that the direction, with Susanne Bier (‘The Undoing’) at the helm, it is quite conventional and flatand the level of production is much poorer than what we are used to.

In short, ‘The First Lady’ fails to take flight, staying as a merely entertaining pastime but which remains as insufficient in depth as it is disappointing in its entirety.