Plarium Global Ltdone of the world’s leading developers of F2P games for mobile and PC, with over 435 million users worldwide, welcomes global soccer superstar Neymar Jr., for his hit game Mech Arena as part of a partnership between Plarium and NR Sports. Wearing a custom bomber jacket and boasting incredible skills, Neymar’s pilot arrives in our latest update arena shooter today, and joins the game’s long roster of characters as a pilot on more powerful so far!

Considered one of the best footballers in the world, Neymar Jr. has scored over 450 goals for his clubs and national team. He is now one of the most famous athletes on the planet and enjoys a community of over 260 million followers on social media. His mix of unforgettable playstyle and confidence in the field inspired the creation of his limited rarity Pilot character. All pilots of Mech Arena have distinct specializations and perks that enhance the skills of their Mechs and Neymar Jr.’s pilot is no exception. With skills that boost damage and speed, he displays the same commanding presence as on a football pitch. As gifted in the arena as his role model is on the pitch, Neymar’s pilot has the maximum number of implant slots available and trades the stepover and the sombrero kick for “implant masteries” featuring a wide range of game-changing skills.

” We are honored and thrilled to have such incredible talent join us as a pilot in Mech Arena said Ronen Gross, Deputy Director of Business Development at Plarium. ” Neymar Jr. is one of the best athletes in the world. His professionalism and his desire to win are the reason we chose him, since they correspond to the spirit of the game. It was a real pleasure to work with him and we look forward to seeing our players enjoy the pilot of Neymar Jr. »

“I love video games as much as I love football, so combining the two to make a character with my skills and style in Mech Arena was a really great experience,” Neymar Jr. said. I look forward to joining my fans and helping them take their game to the next level. See you in the Arena! » 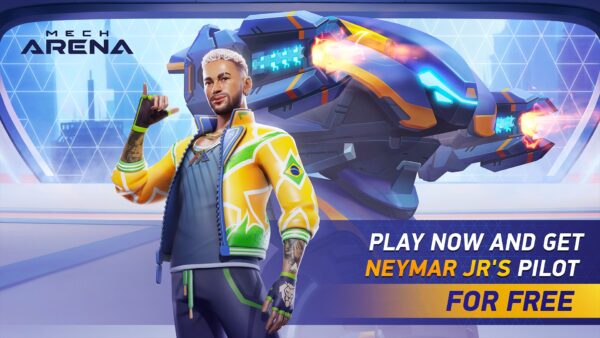 Neymar’s pilot will lead a group of enigmatic characters, including Nova, G-Lock, Yeti and Major, among others. It will be available for free to all players for a limited time, as part of a 7-day Pilot Hunt Loyalty Program. In addition to unlocking their Neymar Jr. Pilot, players will also be rewarded for logging in each day during the program, with six custom Mech skins inspired by Neymar.

Mech Arena is available to users around the world in English, Chinese (Simplified and Traditional), French, German, Indonesian, Italian, Japanese, Korean, Malay, Portuguese, Russian, Spanish, Tagalog, Thai, Turkish, Ukrainian and Vietnamese. The game is available for download and can be played for free on Android, iOS and now also on Plarium’s PC platform, Plarium Playavailable on Plarium.com.