Jeff Bridges, Michael Douglas, Muriel Santa Ana, Dakota Johnson, Kiefer Sutherland and Jane Fonda are just a few examples of performers who initially had to bear the surname of a famous actor father, but thanks to their hard work, tenacity and talent , they found a way to carve out a name for themselves and to establish the coordinates for an autonomous path.
Mirrors in which you can reflect Nicholas Francellawho is going through a great professional moment without weighing down the natural comparisons with his father, Guillermo.

This year establishes a stage of consolidation for the actor. He has starred in two theatrical releases (“An Argentine crime” and “In the sights”) and is part of television fiction “María Marta, the country crime” in which he shines by taking on a coveted villainous role.
His youthful appearance contrasts with the reflective approach with which he approaches the interview. Nicolás Francella is not an impulsive declarer, he thinks each answer. Without being arrogant, he perceives in his face the satisfaction that causes him to be able to choose the projects to which he provides his work capacity. A place that he earned in a short time of career and that drives him as one of the young faces capable of stimulating an acting renewal in Argentine cinema.

News: What was it that attracted you to “An Argentine Crime”? The script, his character, where did the decision to join the project go?
Nicholas Francella: When I make the decision to participate in a project, it is always based on the script, the story, and personally I find real cases very attractive. In this case, the previous talks I had with the producer Juan Pablo Buscaini and all the ideas of the director Lucas Combina, added to the cast of a lot of trade like the one that exists, gives you a great support. We had been talking for a long time with the producer and I found out little by little about how the team was being put together, the colleagues who joined, I found it very interesting how everything was taking place.

News: You had already coincided with Matías Mayer in the movie “Maracaibo”, right?
Francella: Yes, a long time ago and we had the most important scene in the film because it is the one that starts the whole story. We also know each other, we have very similar worlds, friends in common from work and life, we even went to similar schools!

News: Precisely in relation to you and actors like Matías or Peter Lanzani, do you feel part of an acting renewal in Argentine cinema?
Francella: Not to include myself but I say, logically there is a time when new generations appear with actors and actresses within that range who are more inclined to cinema, theater or series. I think that right now we are in a crescendo related to the audiovisual where there are opportunities. I have had good intuitions, I am having a good time in the projects and I had the possibility to choose where to participate…

News: Can you choose without conditions such as money or the number of offers?
Francella: Luckily now I am able to choose to do different things, I am aware of that. Because I’m working, I don’t stop valuing and understanding how important the continuity of work and the variety and quality of the projects is. I have faith that this expansion of offers will encourage much more work, I value being part of that.

News: This year he starred in “En la mira”, he is also in the series “María Marta” and now in “An Argentine Crime”. Can we say that she is reaping what she sowed?
Francella: Yes, You saw that it is a profession of moments and at this moment I find myself with continuity and the possibility of choosing, but I approach it the same way I did with my first jobs. I continue to have challenges and feel those nerves in the initial weeks. I face the work always the same, before and now, this is a very unstable profession.

News: But beyond always having the same working method, in cases such as “An Argentine crime” or “En la mira” you are the protagonist. Is there more weight on your shoulders when you lead?
Francella: Yes, and I take it, but I put it down quickly. I agree with you, but I try not to give importance to the subject when I start a shoot because my dedication, responsibility and predisposition towards any project is exactly the same regardless of the role I play. In “An Argentine crime” I was surprised by the leadership of producer Juan Pablo Buscaini, how he carried out an intense, complex, period shoot, I never saw him overwhelmed.

News: Now that you talk about that topic, what does an actor need from the producer and the director?
Francella: From the director, first and foremost, be honest. That he can convey to you what he wants and that it generates fluidity between actors and actresses, that he is able to communicate his vision with confidence. When that happens, everything comes to fruition because you feel that security.

News: Both in “An Argentine crime” and in “En la mira” he has scenes of sexual content. There is a lot of talk in the industry about the “intimacy coordinator”. Is everything choreographed or is there a place for spontaneity?
Francella: For me it works absolutely the same as always. It is a very rare moment where you feel a tremendous silence on the set. I have been lucky that many times the director asks for that silence and also that there are not many people present. If something choreographic is transformed, it is only because of the camera because sexual intimacy when it is choreographic ceases to be natural, I try to be very concentrated to break that discomfort.

News: In “An Argentine Crime” are Darío Grandinetti, Rita Cortese and César Bordón, three actors who were part of “Wild Tales”. Szifrón is preparing the movie “The Simulators”, did someone approach him to make him a proposal?
Francella: To work on that Los Simuladores movie, you say? No, I imagine it will be centered on the original group. If Szifrón called me for a role, it would be an enormous privilege, a luxury. But it didn’t happen, far away for now (laughs).

News: When someone works in cinema they are usually asked about television or theater. At the time you were part of “Mother and children” with Selva Alemán and Sergio Surraco. Would you like to step on stage again?
Francella: I would like to. Perhaps today I don’t have a material that convinces me so much to do, but I am clear that I want to have fun with some comedy. As I don’t have a material in mind and the theater can condition you when it comes to filming and traveling, there is still nothing in sight.

News: He mentioned comedy and his father is one of the great Argentine comedians. Do you have any apprehension about the comparisons that could be generated or is it not an issue for you?
Francella: Not really, I’m very used to the subject and it belongs more to others than to me. I never expressed discomfort or annoyance about it. Both in theater and in the strips, I went through comedy much more than drama, it is a very difficult genre.

News: Speaking of difficulties, in “María Marta” you play the neighbor, a central character, but outside the family that concentrates all the action. How did you approach that character who is so present but at the same time almost like a ghost?
Francella: In just that same way, he is isolated from everything that happened. Only as the chapters go by do you enter the story and his life. There was a great job with the director Daniela Goggi who is a genius, with all the information she had about the case, the script and the luck of having twenty days of filming in a row, it allowed me to have the whole story shot almost chronologically, so I didn’t I released the character. When the crime happened I was 11 years old and I remember, just like when the Twin Towers happened, being in my parents’ kitchen reading the newspaper with hypothetical ideas about what had happened. They are images of that moment in my head: the pituto, the family… about the neighbor when I started rummaging there wasn’t as much information, I found what I could and I chose to get into fiction, not into the preconceived stereotype. Because the series is a fiction, it will not update the case, there is still an open trial.

News: The last. Do you still have your restaurant? What three dishes would you recommend to someone who is going to eat after seeing “An Argentine Crime” in the cinema?
Francella: First of all, the salmon and avocado tartar, then, as the main thing, we go with the gnocchi that are inside a pumpkin cabutia, later one can scrape it a little and continue eating (laughs). For dessert there is nothing like the dulce de leche volcano. 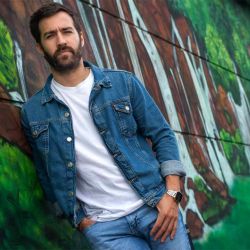