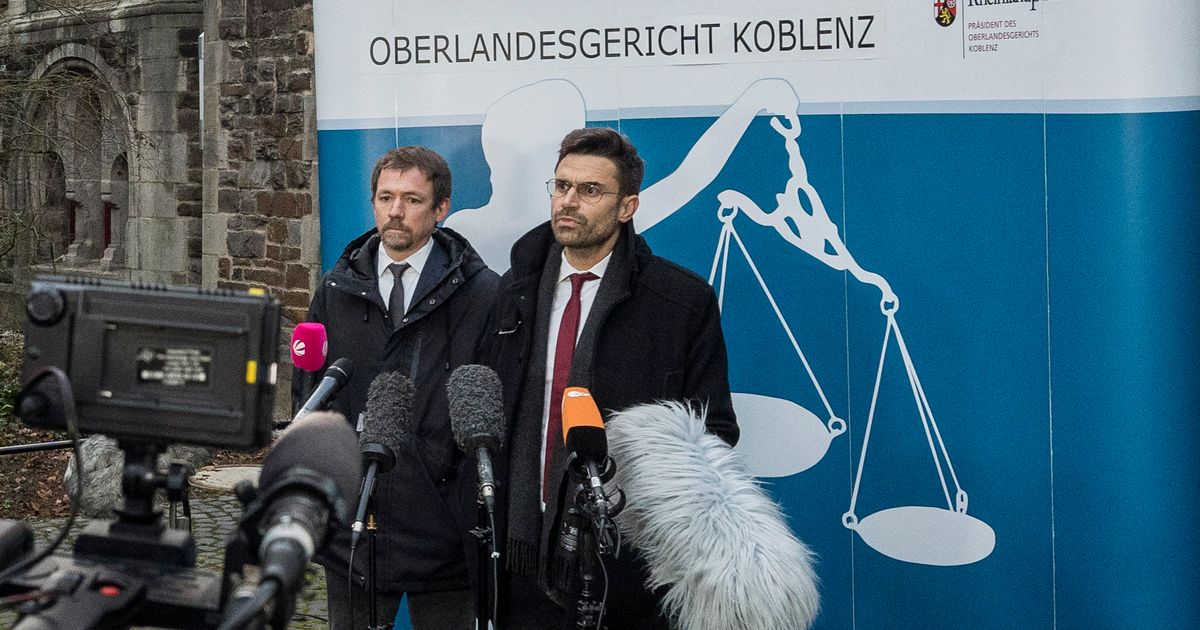 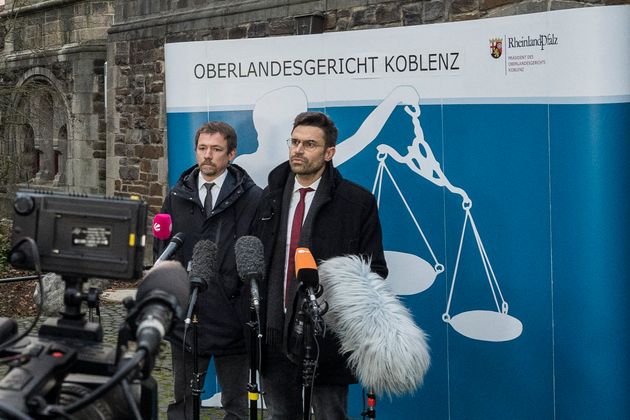 Rene Bahr and Patrick Kroker (R), lawyers of co-plaintiffs, give a press statement following the verdict in the trial of former Syrian intelligence officer Anwar Raslan outside the Higher Regional Court in Koblenz, western Germany, on January 13, 2022 where Raslan was sentenced to life in jail for crimes against humanity in the first global trial over state-sponsored torture in Syria. – Anwar Raslan, 58, was found guilty of overseeing the murder of 27 people at the Al-Khatib detention center in Damascus, also known as “Branch 251”, in 2011 and 2012. (Photo by Bernd Lauter / AFP) (Photo by BERND LAUTER / AFP via Getty Images)

Assistance to political refugees is not just a blanket and a hot meal, it is also justice and rigor against those who tortured them, took away the dignity of the victims and killed dozens of men and women in the name of the established order. In Koblenz, at the confluence of the Rhine with the Moselle, on Thursday the court of first instance sentenced Syrian intelligence colonel Anwar Raslan to life in prison for at least twenty-seven murders, torture and violence in the Al-Khatib prison in Damascus.

Thus ended the trial started on the complaint of one of his victims, a refugee like the executioner in Germany. Raslan was identified thanks to numerous testimonies, arrested and tried on the basis of universal jurisdiction. The German courts have jurisdiction to judge crimes against humanity even if they are committed abroad. The accusations were heavy, the evidence overwhelming, the sentence fully accepted the reconstruction and the demands of the public prosecutor. Barring a review on appeal, Colonel Raslan will end his days in prison. His alleged, subsequent dissociation from the Syrian power apparatus was worth nothing: the second thought would have induced him to flee to Germany like some victims.

The colonel’s criminal conviction is the political condemnation of the Syrian services and leaders. Their methods were unveiled in a courtroom as a shameful disgrace to human dignity, there is no reason of state that can be invoked to justify them or mitigate their gravity. In Berlin, someone will also have evaluated the political implications of the trial and the decision of the judges. As always, realism pushes us to consider sensitivity, balance, backlash in an unstable and threatening quadrant like Syria, in its eleventh year of internal warfare.

Many Syrians have arrived in Germany, not all opponents of Bashar al-Assad, it must not be difficult to infiltrate each other, to create provocations, to inflame spirits. One can imagine the temptation of a quiet life, of not meddling in other people’s affairs, avoiding risks and responsibilities. It is enough to dismiss torture and violence as unavoidable side effects in those latitudes without clamor. Instead, the mechanism of indifference and silence has not been triggered in front of judges who were not afraid to judge and were free to do so.

The force of the law is rediscovered with the imperative of protecting fundamental rights and with the due tribute of justice to democracy. The tool is simple, universal jurisdiction for crimes against humanity, the faculty of states to prosecute those responsible for the most heinous crimes regardless of where those crimes were perpetrated. The political will to use a sharp blade such as the erga omnes jurisdiction could be less obvious, it is necessary to keep under control the reasons of opportunity or interest that can be an obstacle. In any case, the Koblenz trial demonstrates that the aspiration to justice can prevail over the rest and that a democracy in which the division of powers works in earnest is not a figurine in the book of fairy tales, but can instead be touched.

On this the Germans have a particular sensitivity that comes from afar. The Raslan case presents new ways, but other recent events have also taken place along similar lines. Lastly, for the murder of a Chechen refugee in Tiergarten by a Russian hitman enlisted by the Moscow services, the embarrassment of calling into question the security apparatuses of a country like Russia did not prevent the arrest, trial and convict the accused, even if the epilogue led to the planned Russian diplomatic retaliation. The German government would have gladly done without it, however the action of justice has followed its course to the end, without serious shocks.

It is the confirmation that in the Europe of freedoms and rights, closing one’s eyes in the face of heinous crimes is not a recommendable option for a State aware of its duties: even for events that took place outside its borders, even towards foreign citizens. . The Raslan case is to be remembered.