When talking about the silent pandemic of the antibiotic resistant microorganismsthe focus is usually placed on the hospitals. Experts have been warning for years about the increase in infections caused within health complexes by bacteria that have evolved, changing their DNA, to the point of generating shields that make them immune to multiple drugs. Surgical interventions, invasive techniques or episodes of bacterial contamination in hospital cleaning and hygiene tasks can generate the so-called HAIs (Health Care Related Infections), which increase the length of stay of patients in centers and the rate of of deaths.

However, it is not the only environment that worries the scientific community. Specialists from the Microbiology and Infection Control service of the Hospital Universitario de Canarias (HUC) have just published in the journal Antimicrobial Resistance and Infection Control a study that analyzes the prevalence of colonization of multi-resistant microorganisms among all the users of fourteen socio-sanitary centers in the north of the island of Tenerife, ten of them public. Of the tests carried out on a total of 760 residents between October 2020 and May 2021, it was detected that close to 10% (71) were carriers of carbapenemase-producing enterobacteriaceae, which cause the most concern in the health field. This is a “remarkably high rate of colonization”, highlights an article whose first author is Manuel Callejón, a resident doctor at the hospital complex.

The first precision is that these are users colonized by these multi-resistant bacteria, not infected. “A person without risk factors can be colonized on the skin or mucosa by a multi-resistant microorganism without posing a risk to their health. What happens is that when a person is colonized and enters a hospital, they will receive invasive procedures, from inserting a catheter, urinary catheterization, mechanical ventilation… And that is where the bacteria can enter the bloodstream or some cavity and infect”, explains María Lecuona, head of the Microbiology and Infection Control service of the HUC and director of the research project.

The study has focused on some gastrointestinal microorganisms, the so-called carbapenemase-producing enterobacteria. They are the ones that “are producing the infections of greatest concern in hospitals,” says Lecuona. These bacteria have developed a resistance mechanism that makes them immune to a large number of antibiotics. But, in addition, they have a particularity. They can be transmitted by mobile genetic elements to other families of bacteria. “If one does not know that there is a patient colonized by this type of microorganism, in the hospital it can be transmitted through the hands, through the environment, if there is no cleaning or exquisite means of prevention…”

The WHO has been warning for years that antimicrobial resistance, caused to a large extent by the abusive and inappropriate use of antibiotics, represents one of the greatest global threats to public health. In a recent study, this body warns of levels of resistance to drugs of up to 60% in certain bacteria and predicts that the infections produced for this reason will be the cause of 10 million deaths a year in 2050. According to a study published on last November in the magazine The Lancet, one in eight deaths worldwide in 2019 was related to bacterial infections.

In the hospital environment, the implementation of multidisciplinary teams to control the consumption of antibiotics and thus prevent the proliferation of resistant microorganisms has become widespread. However, these programs have not yet reached social health centers. The specialists from the HUC Microbiology service emphasize that none of the fourteen residences in the study had a specific action protocol to monitor and prevent the transmission of multi-resistant bacteria to anti-infection drugs.

The ministries of Health, Agriculture, Fisheries and Food and Ecological Transition and Demographic Challenge published the third National Plan against Antibiotic Resistance (PRAN) in September. In the section on social health centers, this document recalls that in 2019 a specific working group was created to address the optimization of antibiotics in residences. However, due to the outbreak of the Covid-19 pandemic, its activity was interrupted. For the next two years, the plan sets as its objective the development of a “framework document” that includes an analysis of the situation of social health centers, a block dedicated to the prevention of infections and another to the implementation of programs to optimize use. of antibiotics.

In recently published research, HUC microbiologists emphasize that the increase in life expectancy and the consequent aging of the population have made residences an “essential” element of the health system. The results of the study confirm the “high prevalence” of colonization of resistant microorganisms in social health centers in the north of Tenerife and, therefore, confirm the thesis that these environments are established as “important reservoirs” of superbugs and a factor of risk for its transmission and, ultimately, for public health.

The residences care for users with chronic illnesses, people with disabilities and the elderly who, in a high percentage, have multiple pathologies. Therefore, the movement between these centers and hospitals is continuous and this fact “facilitates the propagation and maintenance” of the bacteria. For Lecuona, the data obtained show that they are a population at risk and, therefore, susceptible to undergoing a colonization screening for multi-resistant bacteria at the time of hospital admission to “be able to detect positive cases, isolate them and treat them”. “It is absolutely impossible to screen all the patients who enter, we have to focus on the most vulnerable, which is where the most infections will occur,” adds the director of the research project.

The study notes that transmission within residential settings may be due to factors such as the use of “high-pressure antibiotics, permanent life in a confined environment, or difficulty diagnosing atypically presenting infections,” as well as deterioration common cognitive of users. Previous investigations carried out in Belgium, Switzerland, the Netherlands or Lebanon had detected low prevalence rates (between 0.06 and 1.7%) of carbapenemase-producing bacteria among residents of long-term care centers. However, other studies detected a high incidence. 12% in Israel, 4.1% in Spain and 28.4% in Italy. The one from Tenerife is in this second group.

The analysis carried out by HUC specialists identified a “high or medium” health requirement of users and prior hospitalization as “important” risk factors for the colonization of this type of microorganism (carbapenemase-producing enterobacteriaceae). It also detected a higher prevalence among male residents, a dynamic that had already been noted in previous research and for which the reason is still unknown, although some studies suggest that it may be due to the fact that men have a “higher frequency” of risk factors and comorbidities than women.

Most of the 71 carrier patients in the study from the residences in the north of Tenerife had been colonized by one of these antibiotic-resistant microorganisms, but there are those who have two and even three, although they are the exception.

The specialists stress the need to establish a standardized protocol between acute care hospitals and social health centers to treat these carrier patients, as well as implement antimicrobial administration programs and preventive infection control measures in residences.

Regarding the therapeutic alternatives against these resistances, Lecuona agrees with Aurora Fernández Polo, one of the heads of the Group of Pharmaceutical Care in Infectious Diseases of the Spanish Society of Hospital Pharmacy, who in recent statements to eldiario.es said that in In recent years, the pharmaceutical industry “has turned its interest to other health areas” and there has been “little research” in this area. “There remains some therapeutic alternative, but in recent years there has been more growth in the population of multi-resistant bacteria than in pharmaceutical research into antibiotics, because it is something that requires a lot of effort, money, years of work, phases…”, he maintains. the head of service of the HUC.

“What the scientific community fears is running out of therapeutic resources if bacterial resistance continues to increase and there is not so much synthesis of new antibiotic molecules. Efforts must be focused on generating new molecules and trying to detect colonized patients early to try to reduce cross-transmission and use the treatments that, although scarce, we still have ”, he concludes.

Olympic abdominals in a few weeks with this exercise 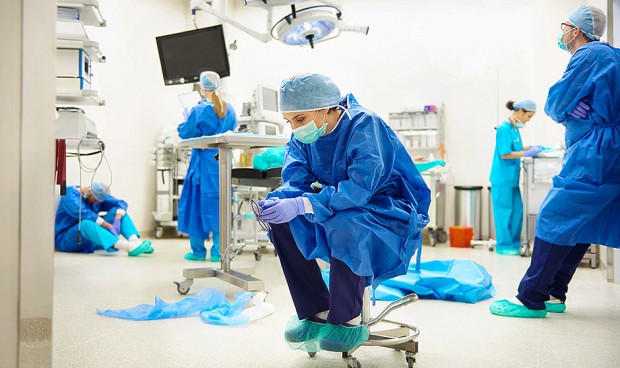 A report estimates that there will be a surplus of 3,500 anesthetists in 2036

Board consolidates 143 positions in Family and Community Medicine