This week, as we well know, the price of Bitcoin has faced a negative market environment that has been affected by the global macroeconomic situation, and recently by the Luna and UST debacle, which has led to position the market sentiment, according to the index of greed and fear, in extreme fear 9/100. 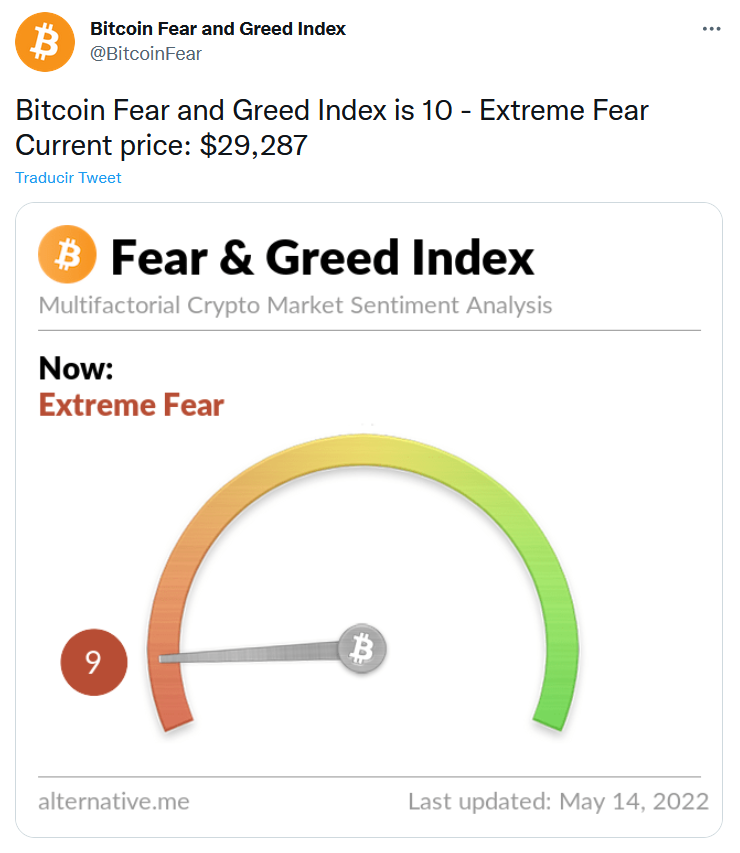 In this sense, according to technical analysis, this uncertainty in the markets has dragged down the price of bitcoin, generating its drop of up to 37% in the last two weeks, and a drop of a total of -61.30% since its historical maximum, similar to the one registered during the first weeks when they decreed the Covid-19 (-52.93%) in 2020, and to the one registered in May of last year after reaching its all time high and that they decreed the prohibition of mining in China (-53.74%). 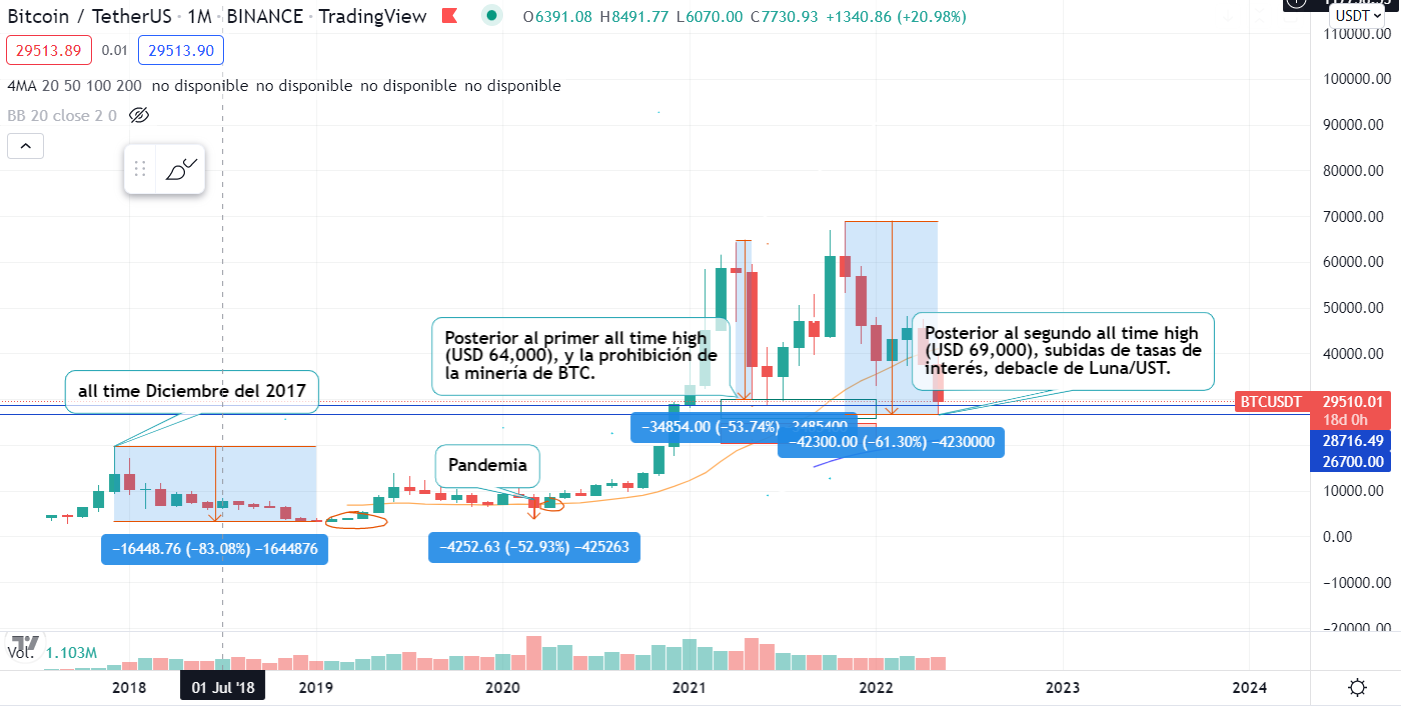 However, at the time of writing this note after the price retraced sharply it seems to have entered the capitulation zone looking for a bottom on the daily chart as it is well below the simple moving averages, and a negative breakout occurred. below the lower band limits in the Bollinger Bands ($26,700), in the same area of ​​supports, albeit a little lower, than the one generated in the May 2021 crash. 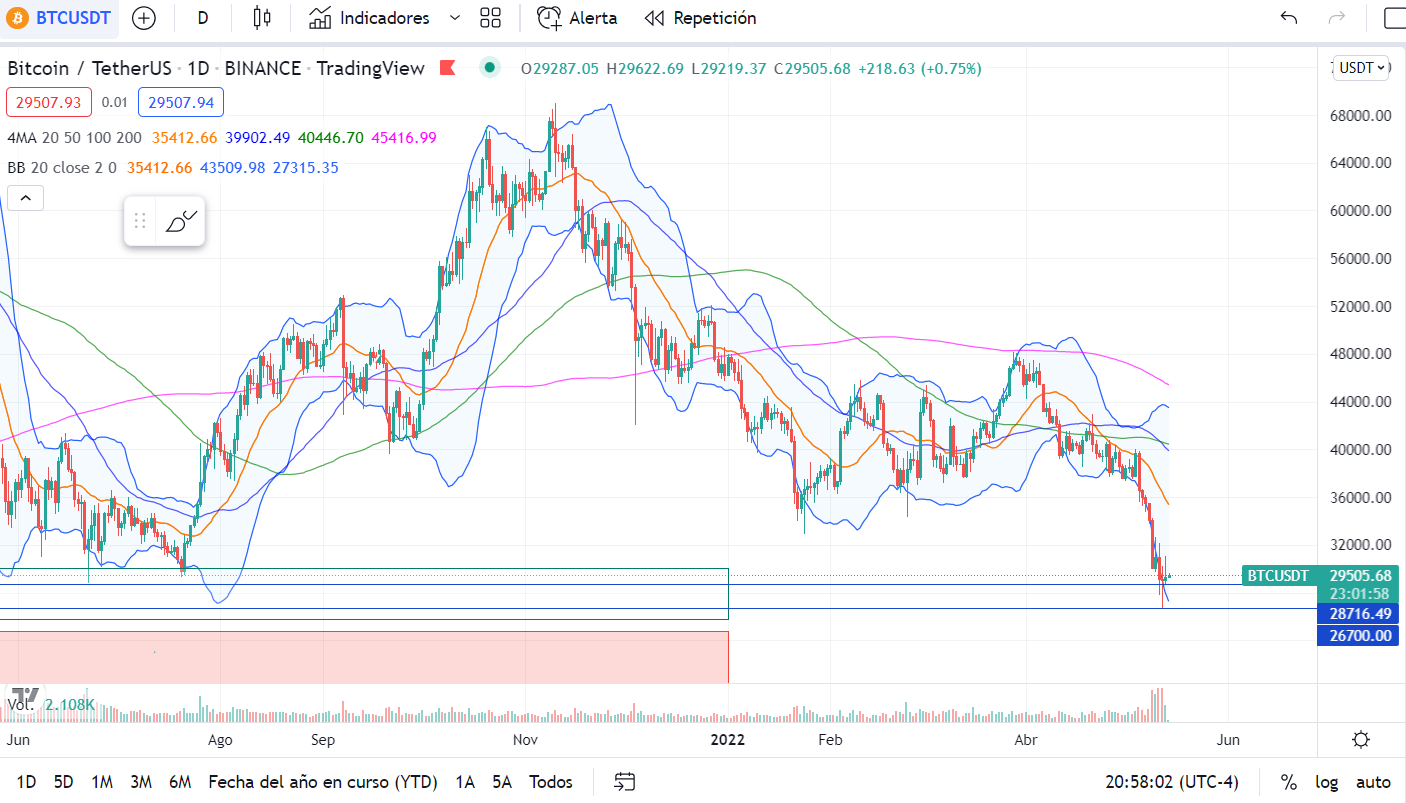 In such a case of generating this rebound completely and strongly in the next few days, because fear and a lot of indecision are still being seen in the lower time frames (4 hours, 1 hour), this could happen with Bitcoin looking for the price zone between USD 32,800-34,000 to make decisions based on the price action also close to the 20-day MA that acts as a price magnet. 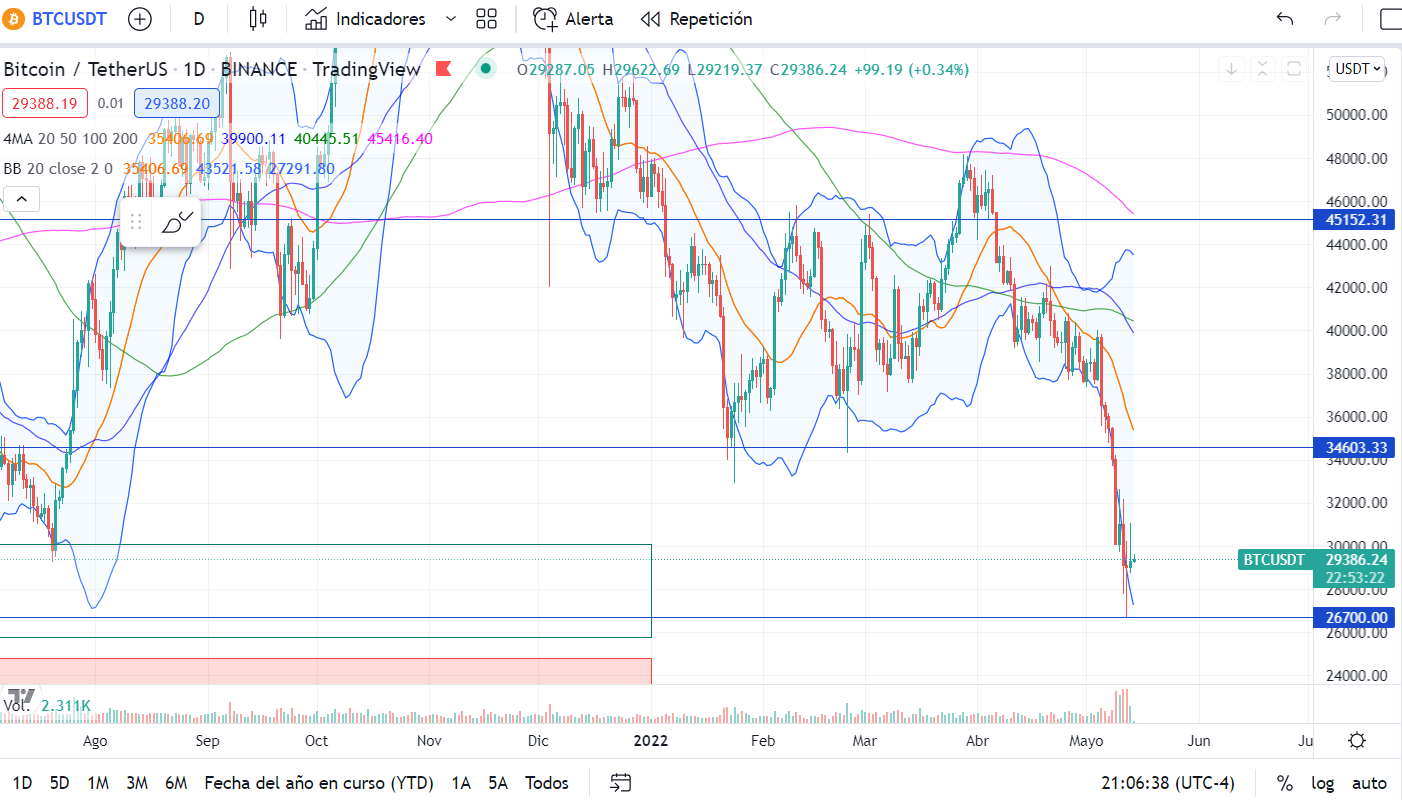 On the other hand, it is very possible that from then on, based on the price action and also on the fundamentals of the moment, a pattern will be generated on the chart that is very similar to last year’s – which in itself is very similar- the next few weeks, maybe months, with daily pullbacks, a lot of indecision, a feeling of neutrality and then going to test the price in the area of ​​USD 23,000-25,000 in order to test the MA 200 weeks and from there decide maybe the start of a new bullrun. 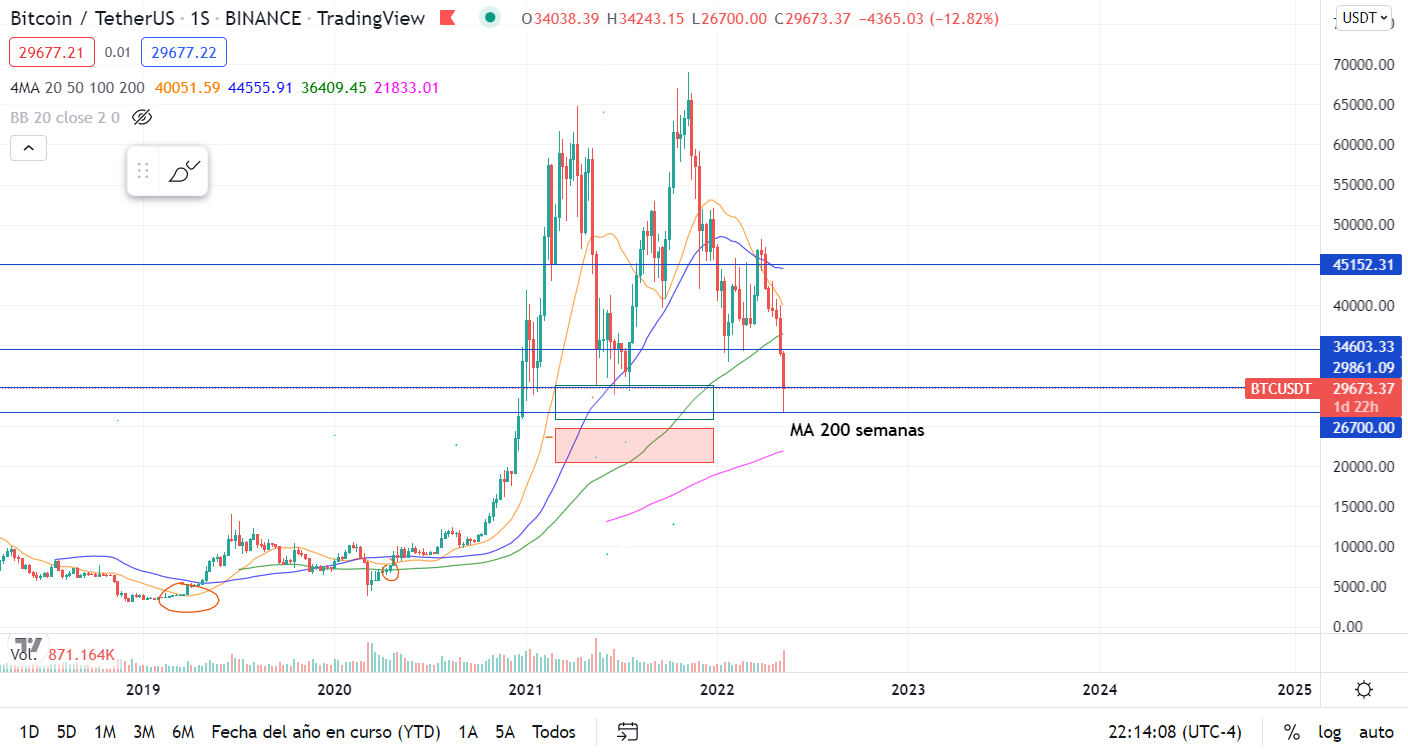 In smaller timeframes, in the case of 4 hours, we have seen that despite the fact that the price recovered USD 30,000, it was not able to stay above that area where the MA 20 is also found in that timeframe, but in case the price once again exceeds 30K and stays above that moving average in said timeframe, there is more possibility of generating the rebound that we previously mentioned, as well as exceeding the USD 32,000 area where the MA 50 is. 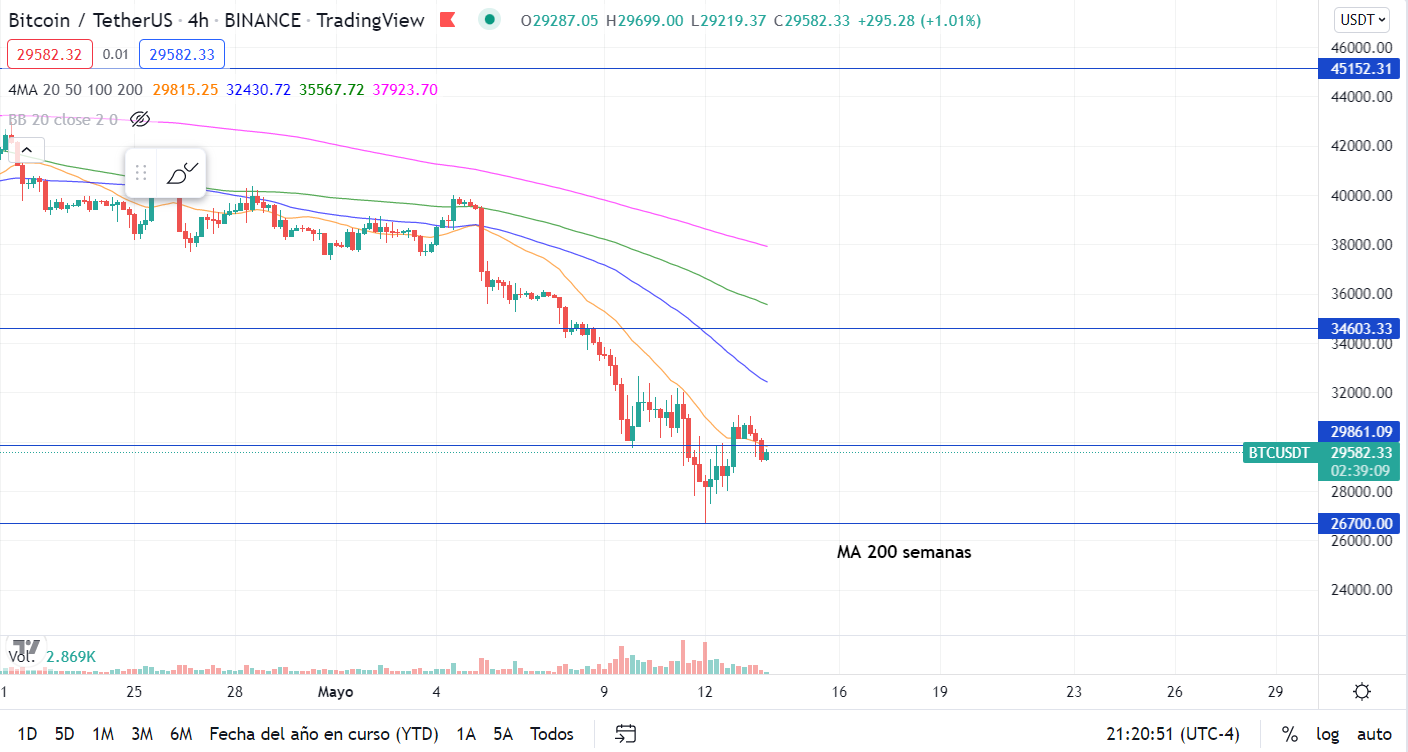 Having said this, in the 1-hour chart we can observe at the time of writing this note compression of the price between the moving averages of 50 and 100, according to similarities of previous movements in the same charts of lower timeframes, the condition of breaking towards above and staying above this compression zone is the most favorable for the aforementioned rebound to occur, passing first through the USD 32,000 zone, if the opposite occurs, the price could fall in the best of cases back to the $26,000. 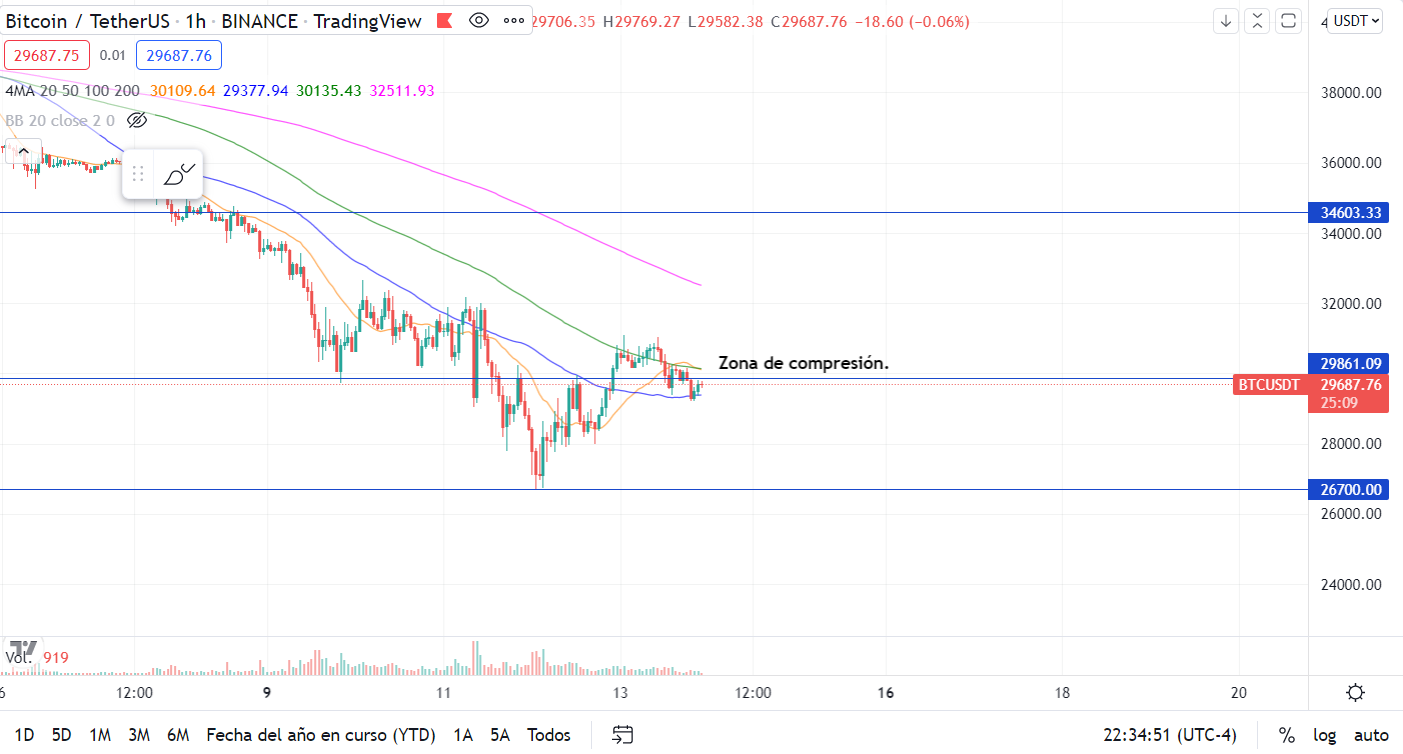 Disclaimer: This material is intended as a commentary on economic or market conditions and does not constitute financial analysis or recommendation. The analysis presented here corresponds to the editor and under no circumstances is an investment recommendation of Cointelegraph. Anyone, before investing, must carry out their own research and is responsible for their own decisions.

Investments in crypto assets are not regulated. They may not be suitable for retail investors and the full amount invested may be lost. The services or products offered are not aimed at or accessible to investors in Spain.