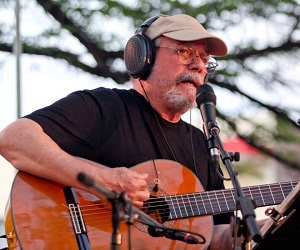 The famous Cuban singer-songwriter, Silvio Rodríguez, will perform for free on June 10 in the Zócalo of Mexico City, the Excelsior newspaper announced this Saturday, which indicates that before that he will have two appearances at the National Auditorium.

José Merino, head of the Digital Agency for Public Innovation, was in charge of revealing that the interpreter of ‘Ojalá’ will be presented on that date in the Zócalo of the capital and that Vivir Quintana will be in charge of opening the presentation at 7:00 p.m. location of that day.

I do not know, think about it…

🎶 These days the sun doesn’t rise, but your face 🎶
And in the deaf silence of time your eyes scream pic.twitter.com/GMRMXkTI8j

According to the newspaper, the official used a verse from the song “In these days” written by the Cuban, to share the poster: “I don’t know, think about it… These days the sun doesn’t come out, but your face. And in the deaf silence of time your eyes scream, ”Merino wrote on his Twitter account.

A few days ago, the head of the Government of Mexico City announced that the singer-songwriter would give a free concert in Mexico City as part of the economic reactivation plan in the country’s capital. But the next day she apologized for bringing forward the troubadour’s free presentation before it was announced that he also had two dates at the National Auditorium, and given his alleged mistake, she invited him to go see him at the Paseo de la Reforma venue. .

It seems that the call had an effect, because according to Excelsior’s note, the organizers of the event announced that Silvio has already completely filled one of his dates and has very little availability for the second.

Founder of the Nueva Trova together with valuable Cuban singer-songwriters, some of whom are deceased, Silvio Rodríguez is one of the most recognized foreign authors in Mexico.

Here he has performed on several occasions and is greatly admired by President Andrés Manuel López Obrador and his wife Beatriz Gutiérrez, who has a video clip of her singing the song El Necio that was projected on national television.

(With information from PL)