US INFLATION + 7% / That record with a sinister message for Europe

Yet the markets reacted as if nothing had happened. Indeed, they celebrated. Of course, the record figure was expected. Of course, many still believe in the narrative of transience. But there is more. And these graphs show it to us: the lumber, the construction timber that last spring operated by canary (unheard) in the mine, has started to rise again, as well as the price of oil for food use is constantly increasing, both rapeseed European than the US canola. In fact, another gift of the energy transition, as vegetable oils are in great demand for bio-fuel production.

There is a problem, however: being a fundamental ingredient of many packaged foods, the cheapest and most widely consumed, a rise in prices in the shopping cart is to be considered insured, from now on to the next few months. Finally, the worst dynamic, the one represented in the third graph: US natural gas on Wednesday marked an intraday increase of 13.3% due to the wave of freezing that began to hit the US East Coast. Translated, if the bullish pressure continues – supported by inclement weather forecasts for the final part of the winter -, the arbitrage guaranteed by the price spread between US and EU gas could lose its appeal for brokers. Which, in fact, would sanction the end of the only resource that Europe can count on today to avoid further skyrocketing prices and the risk of blackouts. That is, the fleets diverted from Asian routes in the name of profit.

In short, a picture that is anything but encouraging. Even for the most optimistic market. Also because the real disaster is represented in this graph: real wage dynamics at an hourly level in the US marked -2.4% on an annual basis, reaching the unenviable row of nine consecutive monthly drops. In short, the cost of living is greatly operating in outpacing compared to increases in real wages. And this should scare the market, at least in an economy like the US which still sees 70% of GDP based on personal consumption. Instead, calm down. 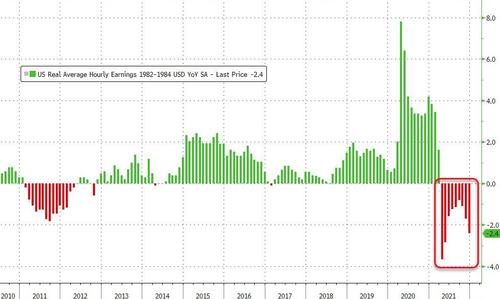 Is there really the conviction of a transience just a little longer than expected? No, there is more. And Bank of America makes it clear in its analysis, packing dozens of data into a single statement: Increasingly the risks are that it will land closer to 3% than the Fed’s 2% target. In short, the depth and breadth of the price increases is such that it cannot be ruled out that the drop point in the medium term cannot fall below 3%. That is, one percentage point more than the Fed’s target quota. The investment bank, in fact, believes that the Core CPI should reach its peak in March, then guaranteeing lower annual readings, but it is the medium term that leaves you dumbfounded.

Or maybe not. Perhaps he let prices gallop for months, selling the fable of transience to the world by exploiting the placebo effect on the incomes of pandemic support programs, precisely to obtain a higher ceiling and a new perspective of monetary approach. Not surprisingly, Christine Lagarde surprised everyone last July by imposing on the board in the last meeting before the summer break none other than the reform of the guidance precisely on the inflation target, inventing the formula of 2% symmetrical. That is, extreme flexibility around the target quota. Why so much haste, above all on a deadly topic for an institution that has its statutory mandate in price stability?

Paradoxically, an answer may have come from the US on Wednesday. And once the binary concept of flexible inflationary target and structural increase in average income has been passed, thanks to the implementation of the various tools contained in the cyclical emergency toolbox, without the need for continuous official reviews, the general assumption will become that of tolerable inflation up to levels considered today in prospect of over-shooting. Hence, interest rate hike policies that become decidedly less tied to dynamics considered antiquated and more in keeping with a world now accustomed to a regime of perennial zero rates.

Exactly what the market wants. Which, as per tradition, prices and incorporates in advance the processes in progress. And it celebrates, not too paradoxically, but rather with just satisfaction, 7% inflation in the US or 5% in the Eurozone.

Welcome to the new world, where debt and its monetization are in charge. Everything will be fine. Perhaps.

We need your input to continue to provide you with quality and independent information.