The days when you needed a powerful PC to play certain games properly are coming to an end. Thanks to cloud gaming platforms like GeForce NOW, we can play from our iPhone or iPad anywhereAll we need is an internet connection.

General view of the service interface.

GeForce NOW is not a native application, it is a web page that, from the first minute of accessing the service, asks us to add it as a bookmark on our home screen. A process that lasts less than 10 seconds and that leave “the app” on our iPad for quick and easy access.

It is true that a PWA, Progressive Web App, is no match for a native app. It is also true that more and more “apps” rely on offering parts of their catalog or functionality as websites embedded within the same application. All in all, after several days of testing GeForce NOW, I have to say that the fact that it is not an app hardly makes a difference in terms of use from service. 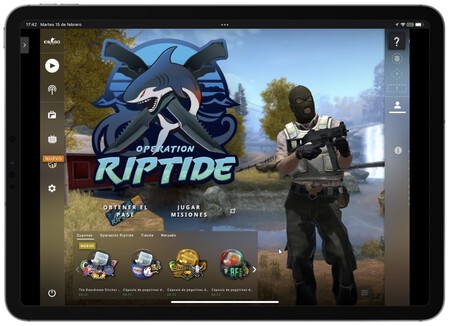 The reason that the service is offered through Safari instead of through the App Store responds to the rules of the latter. Although the initial betas of GeForce NOW were seen in the form of an application, the truth is that the rules of the App Store require each streaming game to be offered individually. This responds to the need to be able to offer the app with all its information, to be able to apply parental controls and, in addition, to provide uniformity with the rest of the App Store catalogue.

It is, however, a requirement that is pushing many streaming game services to use Safari as a PWA. The alternative that Apple itself has proposed, and that allows us to offer a more centralized catalog. As we said a few paragraphs above, a PWA is not an application, true, but since the vast majority of the time GeForce NOW is used we spend in the streaming of the games the difference is minimal.

Library of games and specific information of one of them.

Browsing through the catalog is comfortable, easy and the information that we can access is more than enough before deciding to play a title and go directly to the game interface. Mention that, in order to use GeForce NOW in full, it is necessary to connect our Epic or Steam store account, as they are the owners of many of the games offered in the service catalog.

Once connected to these accounts starting a game is a matter of a few seconds. We simply open the service from our home screen and at the top, just as a movie and series streaming service could do, we find the My Library section, which Might as well be called “Keep Playing”.

And what is it like to play on the screen of an iPad?

Notice of use of game controller and virtual controller.

They go wrong? Not at all, but the complexity of the games offered to us in GeForce NOW requires a dedicated gamepad. We can connect a keyboard and mouse to our iPad or use the Magic Keyboard, but due to the limitations of Safari it is recommended that we only use it to navigate the game menus and to type usernames and passwords, as they may not work in the game.

GeForce NOW is compatible with Xbox and PlayStation 5 controllers, which, it must be said, offer the best gaming experience at service.

Lagging? Is that eaten? 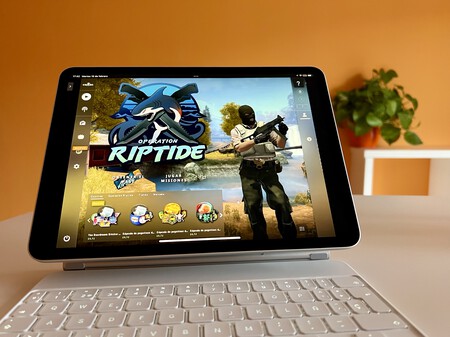 It all depends on the connection, no doubt, but gaming performance is excellent. The reason for this is, as we have already said, that these run in the cloud. We just send simple keystrokes and receive the game video stream. Thus, quickly and without lightning connections, we are playing with the best graphics settingswithout any latency and, in many cases, almost better than if we did it locally.

The impact on the battery, another important aspect to consider, is assimilable to what we could have watching YouTube videos, for example. Let us remember, as we have already said, that what we are doing is seeing something like an interactive movie. Interactive because we are the ones who, through our game controller, decide where to shoot. 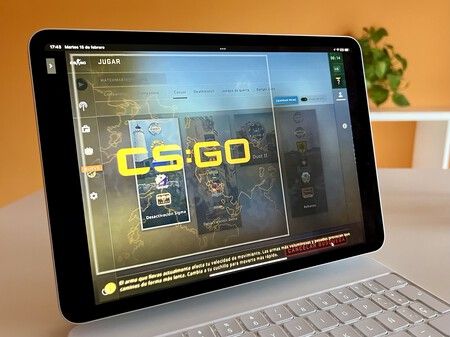 We can play GeForce NOW with any iPhone or iPad that can run iOS or iPadOS 14.3 or later. As for the commands that we can use with the service, the list is considerably long: 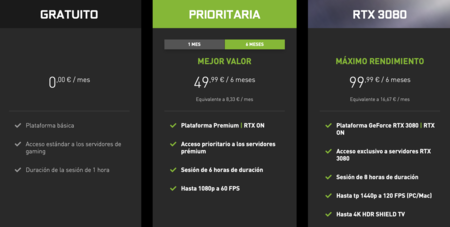 Regarding prices GeForce NOW is offered in three types of subscriptions. The free plan gives basic access to the platform and the servers, with the game session lasting a maximum of one hour. The priority plan, from 8.33 euros per month, gives priority access, extends the continuous game session to six hours and offers us 1080p at 60 FPS. Finally, the RTX3080 plan, at 16.67 euros per month, extends the duration up to 8 hours, gives us exclusive access to the RTX 3080 servers, and offers up to 1440p at 120 FPS (using the app for PC or Mac) and up to 4K on HDR on a SHIELD TV.

A very comfortable way to access a large number of games

Seen what has been seen, the truth is that the solution provided by GeForce NOW is most interesting. Easy and comfortable access to a good collection of titles that no longer require a large device to play. To say, however, as much as the service is also available on the iPhone, which it is on the iPad where we will enjoy the best experience.

Without going into talk about the quality or extension of the GeForce NOW catalog, which would give for a series of articles, it must be said that it is more than enough to be able to enjoy interesting titles in the simplest way. A service that it changes, never better said, the rules of the game of what we can enjoy on an iPad.