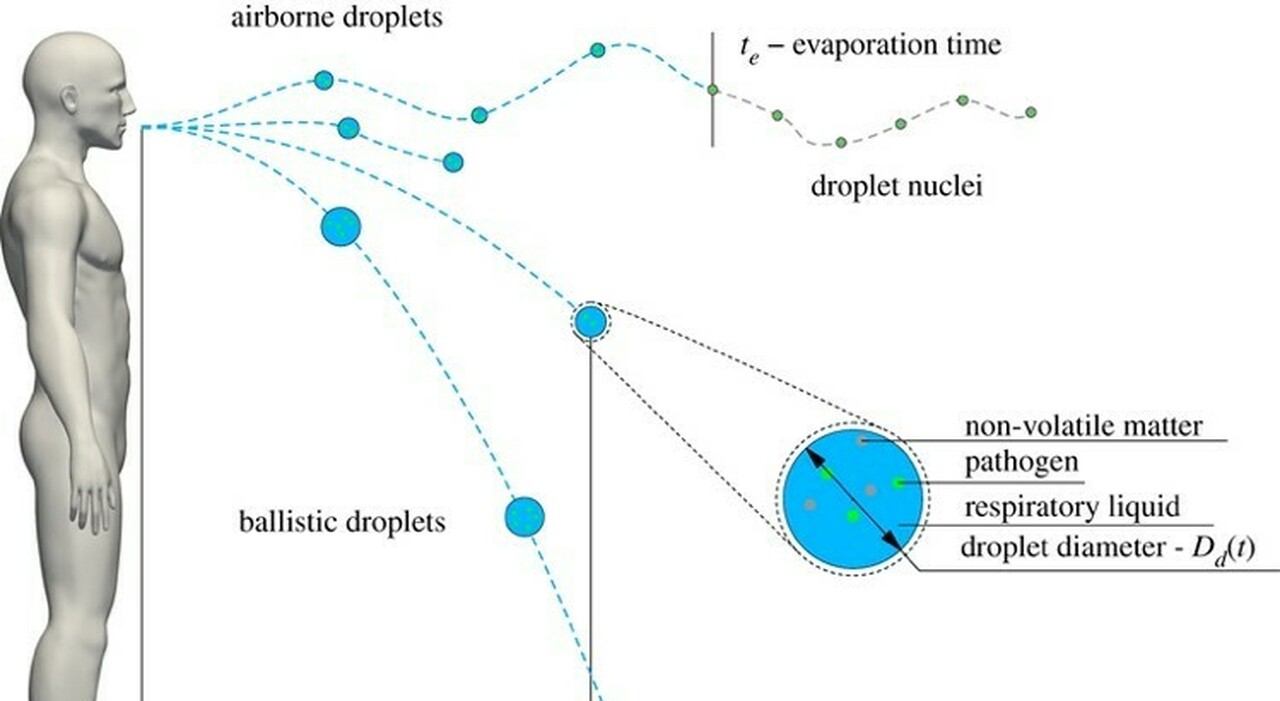 Infected droplets can reach 7 meters away after a sneeze without a mask. It was published in the “Journal of the Royal Society Interface”, an international study in which the Italian universities of Padua and Udine also participated (in the persons of Prof. Francesco Picano of the Department of Industrial Engineering of the University of Padua, together with Alfredo Soldati, to Dr. Alessio Roccon of the Technische Universität Wien and Prof. Gaetano Sardina of the Swedish Chalmers University of Technology). The research also examined other parameters in addition to interpersonal distance, which may play a fundamental role in the spread of the infection from Covid-19.

Positive Covid for how many days can they infect? The Omicron-Delta difference and the viral load

Standard distances and what happens after a sneeze

In fact, even the ambient temperature, humidity and the type of respiratory event they should be considered when defining the standard distances within which there is a risk of contagion. When we talk without a mask, whether it is surgical or FFP2, in fact, droplets can reach over 1 meter, which rise to 3 meters for a cough, sneezing could also affect a person 7 meters away. The data to underline, however, is that by wearing surgical masks or FFP2, the risk is considerably lower, becoming negligible whether you talk, cough or sneeze, even at a distance of 1 meter regardless of the environmental conditions.

The strategies to combat Covid, in addition to the fundamental use of the vaccine, are based on lockdown, interpersonal distancing, sanitizing surfaces and hands or aeration of environments, knowledge that science has gained in the past decades, after the Spanish flu pandemic of 1918. , starting from 1934 when the research of the American William Firth Wells, laid the foundations for the study of airborne transmission of viruses and social distancing.

According to Wells, the emission of salivary droplets occurs through the formation of a spray of droplets pushed by the exhaled air: the drops in their motion evaporate, settle or remain suspended. The larger and heavier ones fall before evaporating showing a ballistic motion (droplet), while the smaller ones evaporate before falling and tend to be carried by the fluid (airborne). From a practical point of view, the distance of 1.8 meters is the one in which the largest droplets arrive before falling on the ground, while the smaller ones, once evaporated, become tiny residues of non-volatile material capable of remaining suspended in the air and be infectious for a long time in closed, unventilated environments.

The research in which the University of Padua participated, therefore, highlights that there is no universal safety distance and provides some examples of distances without a mask. Considering a cough with an average viral load, there can be a high risk of contagion within 2 meters, in conditions of average relative humidity, which instead become 3 with high relative humidity. “The rules of interpersonal distancing usually used are mainly based on the study proposed by Wells in 1934. In our work – says Francesco Picano – we have revised this theory using the most recent knowledge on respiratory sprays, arriving at defining a new model to quantify the risk of direct respiratory contagion. Application of the model provides a systematic assessment of the effects of spacing and masks on the risk of infection. The results indicate that the risk is strongly influenced by environmental conditions such as humidity, viral load and the type of respiratory activity, suggesting the inexistence of a universal safety distance ».