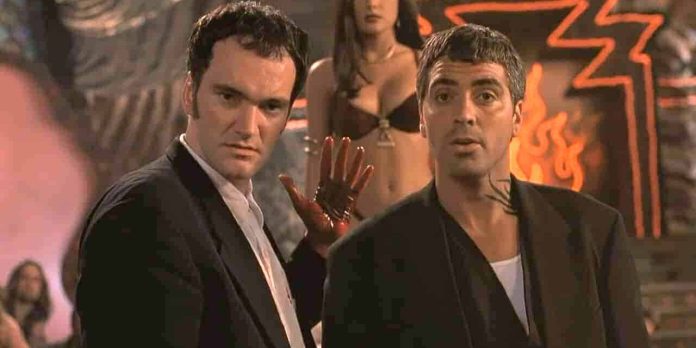 What does it matter to Quentin Tarantino – fresh from Pulp Fiction – to bring to the big screen a b-movie that begins as a thriller and ends as a horror splatter? Very little, if he himself decides to play one of the protagonists, even earning a couple of nominations as the worst supporting actor.

The label of great filmmaker does not scare him: Tarantino has his friend Robert Rodriguez direct a script written in high school and reworked with Robert Kurtzman. The result is a movie released on January 17, 1996 it immediately became a cult of the genre, thanks to the huge success in the hall.

We then start with the story of two delinquent brothers who flee to Mexico after robbing a bank. The two take a family hostage to cross the border. The journey, however, takes a wrong (and totally unexpected) turn when the group enters a nightclub run by vampires. Tarantino said he took inspiration from George A. Romero’s films (such as Zombies and Night of the Living Dead), but of course we are faced with a very different film. The development is totally unpredictable and often trashy, but the viewer remains glued to see how it ends. From the point of view of a fan of the horror genre it is certainly one of the most interesting films, above all because it starts in a totally atypical way.

In the cast is George Clooney who, known for ER – Doctors on the front line (series in which Tarantino also directed an episode), establishes himself as a Hollywood actor: thanks to the film he comes out of the role of the doctor and wins various awards, including theMtv Movie Award. In the story he plays the professional thug (Seth), unlike the sadistic brother played by Tarantino who is a real sex maniac (Richard). Some critics have claimed that the only one who played decently in the film was Harvey Keitel (Falling in Love) as Jacob, head of the family and former pastor kidnapped by the duo. Surely the comparisons between him and Seth are the dialogues with more depth, since the rest is all quite funny.

The film also features Juliette Lewis (Jacob’s daughter) and Salma Hayek, the latter as the vampire queen. The scene where Santanico Pandemonium – as the vampire is called – dances with a coiled snake and pours whiskey on her leg so that Richard (aka Tarantino) can drink from her foot has become iconic. Among other things, it seems that the dance was improvised because there was no choreographer available.

The whole setting of the venue obviously deserves exceptional music. Do not miss the live band that accompanies the fight between humans and vampires, which also peeps out Tom Savini (aka Sex Machine), Romero’s colleague and director of the remake of Night of the Living Dead.

As far as I’m concerned From sunset to dawn is a cornerstone of the horror genre for the originality of the theme. Surely it carries on its shoulders the good and bad of being a nineties film: looking at it today, compared to yesterday, the limits from the horror point of view are evident even only at the level of special effects. However, it is one of those films that has remained in my heart, also because it does not happen every day to see actors like Tarantino and Clooney in a horror splatter with vampires. I read that some scenes were cut in the United States because they were deemed too strong, but looking at it today it doesn’t seem to me to be a particularly heavy film. A curiosity: the scene where the vampire tells Seth “Welcome to the world of slaves” has an impromptu response from George Clooney that accidentally stayed in the final film:

Currently streaming on Amazon Prime Video, the film was also the inspiration for the making of a TV series that is available on Netflix and whose creator is also by Robert Rodriguez.

Three reasons to watch the film

When to see the movie

When you want to escape with your mind: a winter evening or a summer afternoon.

“From Quentin Tarantino. From Robert Rodriguez. From Dusk till Dawn“

The images contained in this article are reproduced in compliance with article 70, paragraph 1, of Law no. 633 on the protection of copyright and other rights related to its exercise. It is, in fact, a “summary, […] quote o […] reproduction of pieces or parts of a work […]»Used« for use in criticism or discussion », as well as for mere illustrative and non-commercial purposes. The presence in CulturaMente does not constitute “competition for the economic use of the work”.