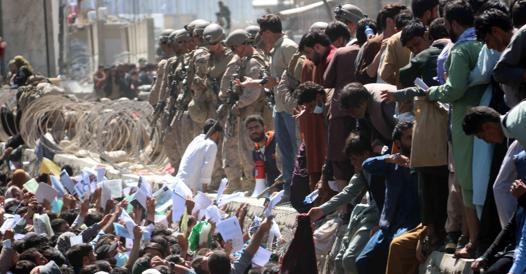 Raphael Marshall, 25, a former diplomat, recounted the experience he had at the Foreign Ministry during the excited days of the withdrawal from Kabul: “many were abandoned there, at the mercy of the Taliban”

LONDON – Thousands of unanswered emails, no one on duty, unexplained delays that cost lives. Raphael Marshall, a former diplomat who left the Foreign Office – the British Foreign Office – a few months ago, recounted his experience during the Afghan crisis, a 39-page testimony presented to the Westminster Parliamentary Foreign Affairs Committee that portrays the lack of organization and the sometimes chaotic circumstances in which it took place evacuation from Kabul

Dominic Raab, now Deputy Prime Minister at the time Minister for Foreign Affairs, defended his actions, underlining that “15,000 people” were rescued by the United Kingdom, “more than any other country except the United States”, “the most important of history “.

There are, he pointed out, lessons to be learned, but Marshall’s reconstruction is not entirely true. It is not true, for example, that officials with little experience and no knowledge of Afghanistan were left alone to make decisions about who to save and how, unlike what Marshall has indicated. Their job was to open and sort out requests for assistance arriving from Kabul, the minister said.

If it is correct, as Marshall argues, that the minister took “hours and hours” to make important decisionsRaab stressed that “it was important to make the right decisions”.

Despite the minister’s clarifications, the report of the 25-year-old graduate of Oxford, who began underlining that he had always esteemed and admired the Foreign Office and hoped to spend the rest of his life in the diplomatic service, raised a certain sensation, also because at the time Rahab had been severely criticized for being on vacation in Crete with his family as the Taliban entered Kabul. The images of overcrowded airports, of people desperate for a passage to safety, of mothers and fathers who have entrusted their children to foreign soldiers in order to save them are still fresh in the memory, in the United Kingdom as in other countries.

According to Marshall, only 5% of the applicants were rescued. Thousands of people considered “special cases”, or former indirect collaborators of the British authorities, deputies, journalists, Afghan activists, remained in Kabul and paid for their connection with a foreign country with their lives.

In his team, he specified, no one had previously studied Afghanistan, no one knew the language of the country or the situation.

A colleague of his “was clearly terrified of having to take hundreds of decisions about the life or death of people he knew nothing about“.

The computer system used by the Foreign Ministry was not compatible with that used by the Department for International Aid (which was absorbed by the Foreign Office), while despite the emergency, ministry employees continued to work eight hours a day, five days a week: only those who volunteered worked overtime.

There was no staff, so often there were 5,000 unanswered emails.

Marshall did not spare Prime Minister Boris Johnson, noting that while there have been serious delays on decisions regarding visas and passes, the premier’s announcement of the need to rescue Paul Farthing and the animals of his charity, Nowzad, were greeted with utter bewilderment. Johnson denied that he was personally interested in the return of the animals.