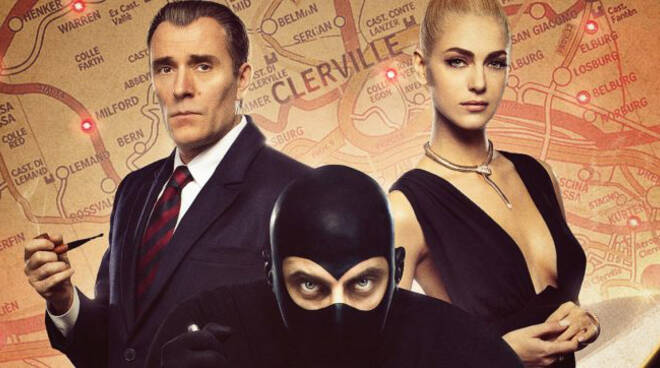 The Cinema Palazzo Vecchio review in Bagnacavallo continues over the weekend with “Diabolik” by the Manetti Bros (Friday 14, Saturday 15 and Sunday 16 January).
The film is the film adaptation of the famous cartoon character created by Angela and Luciana Giussani, published for the first time in 1962. Luca Marinelli plays the role of Diabolik, while Miriam Leone and Valerio Mastandrea play respectively Eva Kant and the Inspector Ginko.
Set in the fictional town of Clerville in the late 1960s, the film follows the adventures of Diabolik, an unscrupulous thief with a mysterious face, who scored yet another blow, escaping the police in his gleaming Jaguar E-type. To win the attention of Diabolik will be the charming Eva Kant, an heiress who arrived in the city with a jewel of great value, the famous pink diamond. In an attempt to steal the precious stone, Diabolik will be bewitched by the woman. This time, however, Inspector Ginko, aided by his team, has devised an infallible plan to trap the skilled thief.

On Tuesday 18 and Wednesday 19 January La Grande Musica al Cinema will return to Palazzo Vecchio with “Caterina Caselli, one life, one hundred lives” by Renato De Maria, then the week will end with “The perfect boss” by Fernando León de Aranoa (21, 22 and 23).

Subsequently, Tuesday 25 and Wednesday 26, for “La Grande Arte al Cinema” in collaboration with Nexo Digital it will be possible to watch the docufilm “Botticelli and Florence – The birth of beauty” by Marco Pianigiani. The closing of the month will be entrusted to one of the greats of world cinema, Clint Eastwood, with his “Cry Macho” (28, 29 and 30).