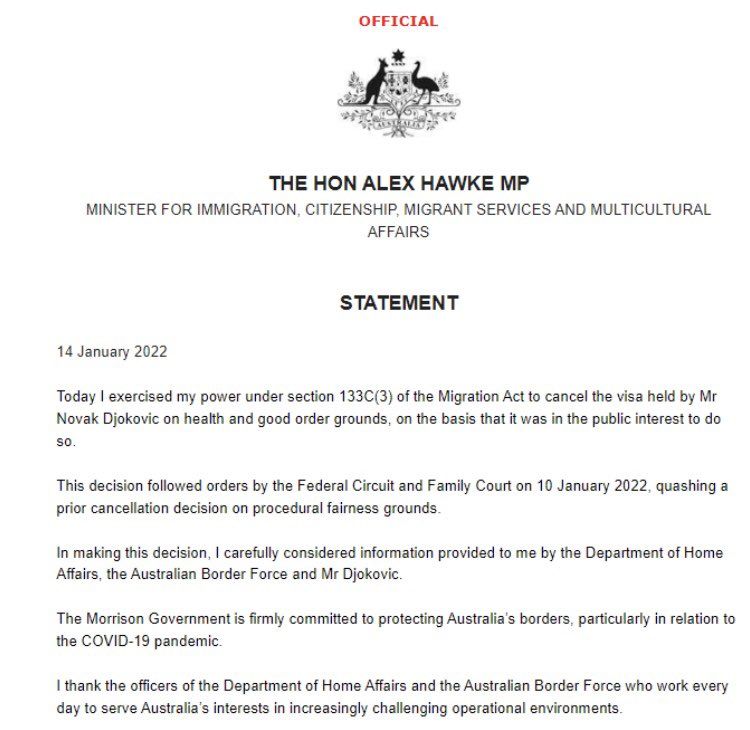 The long-awaited decision of the Minister of Immigration Alex Hawke has arrived: Novak Djokovic’s visa has been definitively canceled, the number 1 in the world will have to leave the country.

Here is the Minister’s statement: “Today I exercised my power under Section 133C (3) of the Migration Law to cancel Novak Djokovic’s visa for reasons of health and public order, on the basis that this was in the public interest. This decision comes after the Federal Circuit and Family Court orders of January 10, 2022 that overturned a previous decision on procedural fairness grounds.

In making this decision, I have carefully considered the information provided to me by the Department of Home Affairs, the Australian Border Forces and Mr. Djokovic.

The Morrison government is firmly committed to protecting Australia’s borders, particularly in relation to the Covid pandemic. I thank the offices of the Australian Department of Home Affairs and Border Forces who work every day to secure Australia’s interests in these times of great challenge ”.

Djokovic’s legal team was ready for this eventuality, so much so that they had already presented an urgent reminder against the decision. However, times are very tight and the chances of overturning the decision seem low.

In addition to being expelled from Australia, Djokovic also risks not being able to return to the country for three years, as mentioned in Article 133 of the law.

The decision by Immigration Minister Alex Hawke means Novak Djokovic could be forced back into scheduled detention for undocumented migrants within hours. It is unclear whether federal authorities intend to take him back to Carlton’s Park Hotel, where he remained alongside the detained refugees until the Federal Court ordered his release on Monday. Government sources have confirmed that the plan would be to bring him back to some form of detention for immigrants, since he does not have a visa and cannot move freely around the country.

Djokovic was notified to appear in front of the immigration department officers tomorrow for an interview. This was reported by the Melbourne newspaper The Age, according to which the world’s No. 1 will not be in custody until the meeting with the police and the definition of the legal appeal presented.

Govt currently talking with his lawyers, per @Gallo_Ways

He will be staying out of detention until the interview and pending any legal action @theage https://t.co/Q8IUDnMhLG