The structural works on the gym that will be built by the Province of Lucca, in the spaces of theex Cavallerizza Ducale, in the historic center. There gym it will be ready approximately for the beginning of the next school year 2022-2023 and initially it will be intended for use by school students within the walls that until now did not have them. 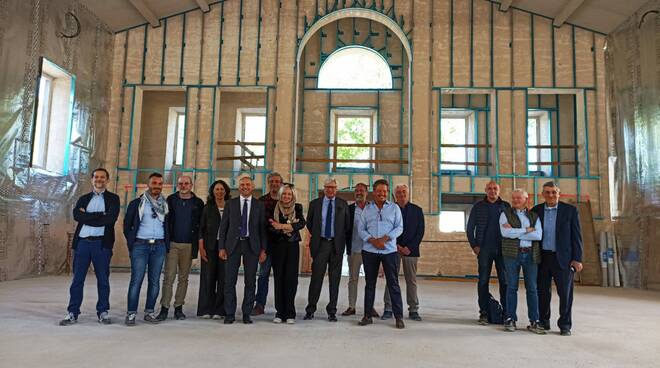 THE jobs those on the outside and on the roof have been completed and those for internal thermal insulation have also begun.

Today (May 12) took place the site inspection attended by the president of the Province of Lucca, Luca Menesinithe manager of the technical office of Palazzo Ducale, the architect Francesca Lazzeri, together with her colleague, architect Fabrizio Mechinithe president of the Lucca Savings Bank Foundation, Marcello Bertocchinithe manager of the territorial school office of Lucca and Massa, Donatella Buonriposias well as the representatives of the company Giacchini Giuseppe srl of Ponte all’Ania in Barga, which was awarded the contract.

Satisfied with the result, the president of the province Menesini: “This intervention is very important for the city of Lucca for two reasons – he declares -. First of all because from September a part of the schools in the historic center and the sports associations will have a public gym at their disposal. Ua lack repeatedly highlighted in the meetings and which the Province took charge of by finding an innovative solution. Secondly, because with this operation we restore functionality and beauty to a prestigious building in the city, a few steps from the Walls. A great job that, I am sure, once completed will represent a concrete and fundamental response to the needs of students and sports lovers “.

“That of school building is an area that has characterized the strategies of the Foundation in the last ten years – explains the president of the Crl Foundation Bertocchini -. Seeing such an important construction site in the pipeline is a source of great satisfaction because it is the result of a synergy with institutions that has been tested and made up of continuous dialogue. In fact, the one allocated by the Foundation on the Cavallerizza Ducale is one of the most substantial contributions of recent years, agreed with the provincial administration. as part of a broader process that also saw the issuance of a specific announcement. An overall investment for schools of about ten million euros in all alone between 2018 and 2021, which made it possible to tangibly improve the safety conditions and the quality of teaching in the institutions, up to the construction of new structures or to the recovery of environments like this. It is nice to see the results of such a significant project for the area. “

The work carried out. The intervention, as a whole (whose construction site opened in November 2020) is carried out in such a way as to safeguard the pre-existing morphological features that are still recognizable, adapting them to the functional conformation of the new building. D.fter the removal of what remained of the ancient roof and the old artifacts no longer included in the renovation project, the company worked on the consolidation of the external walls and, above all, the construction of the new roof which required several months of work both for the grandeur and the conformation of the beams and trusses, and for the installation of the new gutter channel on the recreated terracotta roof, as well as the new always terracotta tiles. In particular, the eaves channel has been faithfully reconstructed on the design of the one conceived by the architect. Pawls. And also the will of the Province to leave the beams and the trusses exposed is a reference to the designs of the well-known architect from Lucca. A thermal coat has been created on the inside of the walls to energetically isolate the gym and minimize dispersion.

The work to be completed. On the four facades of the building where the plaster was laid, the wood scraping operation will now start to create a particular effect of the type used for the facade of Buonvisi Palace, seat of the Passaglia artistic high school in via Fillungo. The iron fixtures will then be mounted, then the gym will be set up with the lining of the internal coat, creating an acoustic lining in Celenit made up of natural materials such as wood, concrete, marble dust and water, which can be defined as a natural and sustainable insulator. The plumbing and (underfloor) heating systems with controlled mechanical ventilation still need to be built to ensure the right air exchange and the electrical one. Then of course, since it is a gym, the flooring of the playing field will be in rubberized resin.

“We started by asking the state property to grant this property – explains the manager of the technical office of Palazzo Ducale, the architect Francesca Lazzeri -, we obtained the provisional way to apply for funding, because we had identified it as a strategic asset to make up for the lack of gyms for schools in the historic center. In this place we are very close toPassaglia Institute, in via Fillungo and at the Machiavelli classical high school. We therefore concluded this enhancement agreement with the State Property and with the participation of the Superintendency, we obtained a concession for this asset with a partly ministerial funding and partly from the Lucca savings bank foundation and we started this recovery contract. This building was completely abandoned, the roof had fallen, hadn’t been used for many years. The funding obtained – concludes the architect Lazzari – is 2 million and 50 thousand euros, we then participated in regional calls for further funding for the equipment and furnishings of the gym. With these resources we hope to complete the works and be able to return it to the city within the year “.

“When we started the works, the building looked like a forest – explains the architect Fabrizio Mechini -, during the works, we have found very important elements of Nottolini and we have faithfully reproduced them by calling even non-local companies. We turned to the Impruneta Manufacture for the reproduction of a terracotta earthenware that acts as a gutter for the roof. Then we also re-proposed the wooden trusses of Pawls to three monks, who through the structural calculations of the structural operations manager, engineer Tiziano Suffredini, recreated the building as it was designed. All this with the collaboration of the local Superintendency, with the architect Marco Chiuso, who also gave suggestions on the recovery of some elements, such as the stone jambs and the architraves of the windows, precisely to reproduce what the original building was “.

“From a technological point of view – adds the architect Mechini, which followed the recovery process -, let’s improve the building, we have a low impact thermally insulated roof, we have internal thermal insulation, we can already see it on the walls. This thermal insulation will be covered with celenit leather, but of architectural aesthetic quality a little more advanced than the classic, which will also have anti-reverberation characteristics for noise reduction and avoid the rumble of the balls inside the gym. From a heating point of view, we have a radiant floor. So even in this historic building, we managed to find spaces to use modern techniques, still considered technological innovations “.

“The gym itself will be ready by September – he specifies -, in mid-September it can be used. Our plan is also to arrange the outdoor spaces, because they are in any case a qualifying element of the complex, including the access and connection with the walls, with the creation of parking lots, precisely to make the building completely safe, but also accessible to People with disabilities”.

The history of the former Cavallerizza Ducale. The building was built between 1821 and 1823 for government use for the ministry of public education which used it as a riding school for the riding exercises of the students of the Royal College and the Military Corps of Pages. From a historical point of view, the structure is in a transition phase between two governments: the first constituted by Elisa Bonaparte with her husband Happy Baciocchi and that of Maria Luisa Borbone daughter of the King of Spain who, in this building, intervened with their court architects: Giovanni Lazzarini for the Baciocchi and Lorenzo Nottolini royal architect of the Bourbons. The building, in fact, was started by the architect. Lazzarini, trusted technician of the Baciocchi family and completed in 1823 by Nottolini on the recommendation of Maria Luisa di Borbone. The construction of the building represented the completion of the larger complex of the Real Collegio which from the early 1800s at the behest of Elisa Bonaparte and her husband Felice Baciocchi, proposed to become a boarding school in Lucca for the education and training of young villagers and foreigners belonging to the upper class.

The College it was soon frequented by many foreign students from the Grand Duchy of Tuscany and from other Italian states. Since the students were all from a good, if not noble, family, it was considered appropriate to equip the College with a covered riding school to allow them to learn horseback riding in the winter months. The gymnasium known as the “horsewoman” and its annexes are part of the complex called Former Real College and it was built on the property of the College itself and intended for the riding exercises of the collegians themselves and of the Military Corps of Pages. Later it was provisionally occupied by the refugee collection center and, in February 1956, at the request of the Municipality of Lucca, it was granted use to city institutions without gyms and presumably used for this purpose until the 1970s.