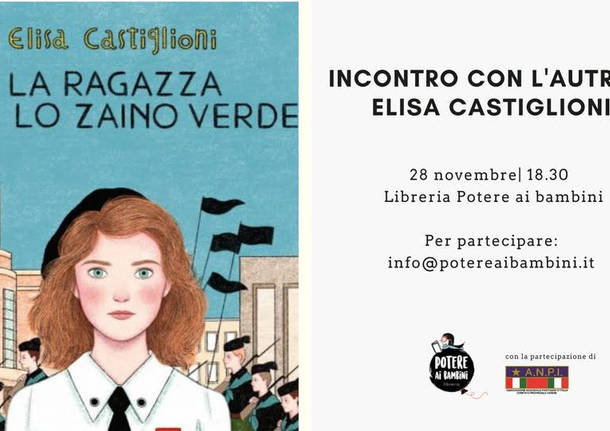 At the Power to Children bookshop in Varese, Sunday 28, the new novel will be presented by the Varese-born author Elisa Castiglioni, among the most interesting and loved voices in schools, best-selling author of children’s literature in Italy today.

A novel inspired by a true story, that of partisan grandfather of the author who became a reference figure of the Lombard resistance. After the war he became mayor of Cardano al Campo.

The story is set in 1938 precisely in the province of Varese, between Cardano al Campo, Gallarate, and Varese city and you can see it directly from the cover of the book: it is the square. It was born from the writings of the Partisan grandfatheror, a reference figure of the Lombard Resistance, who joined the Cinque Giornate group and participated in the battle of San Martino, one of the first actions organized by the Partisan Resistance in Italy. This novel is also the result of years of research and the places, the facts, even many of the people who recur in history have historical truth.

On the death of her grandfather, the author wanted to reconstruct his life, starting from his diaries, and making that local history the mirror of a broader history. He has done all kinds of research and the places, the facts, even the people who recur in history have historical truth.

The book: 1938, province of Varese. Alida is 14 years old: clear eyes, straight shoulders, she is proud to be a Young Italian, the pride of fascist Italy. The Duce watches over everything, and she feels serene, between the summer in the colony and the demonstrations of the fascist Saturday. Until his balance begins to crack. It is the arrival of the racial laws and the big world begins to undermine the intimate one of Alida’s affections and friendships: is it right that her friend Miriam can no longer attend school? Why has Aunt Isabella, so critical of the Duce, disappeared? And what is his father hiding? Alida gradually finds the answers, and life calls her to a choice: can you go against everything they have always taught you? With the depth and grace she has accustomed us to, Elisa Castiglioni faces the darkest era of our history, in her most engaging historical novel, reconstructing everyday life in the times of fascism

The author: Elisa Castiglioni studied writing and fiction in the United States where she lived for eight years. He has collaborated with several American magazines. He teaches Italian Language and Culture at the IES Abroad center in Milan. She holds writing workshops and is involved in teacher training. With Il Castoro he published The Girl Who Reads the Clouds (2012, Premio Cento 2013) The Stars Shine on Rome; Desideria; On tiptoe on the horizon, Giallo Primula (digital story 2020). The Girl with the Green Backpack is her fifth novel. He lives in Varese.

Camila Cabello spoke of her experience with anxiety: “I was trying not to show how much I was suffering”