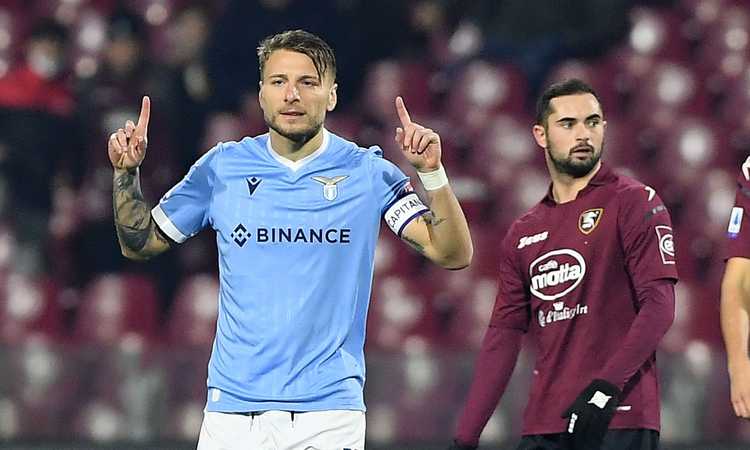 Iervolino had imagined his first match at Arechi as president differently, against Lazio of the former owner Lotito. His Salernitana is in total emergency due to covid (missing, among others, Gagliolo, Gyomber, Ribery, Coulibaly, Kastanos, Simy and Djuric, Colantuono is forced to make his 2002 Motoc debut in defense), but the one that takes the field in Salerno is a great Lazio. The biancocelesti hide the ball from the grenade for 90 minutes, open and close the game in the first 10 and spread in the second half. They decide a brace from Immobile, who overtakes Vlahovic at the top of the top scorers, and a goal from Lazzari. Sarri loses Cataldi through disqualification and Pedro through injury, but finds a game that begins to resemble the one with which he had enchanted and surprised all of Italy.

FIRST HALF – The first half of the race is literally one-way. Lazio immediately takes command of operations and in 10 minutes opens and closes the discussion. At 7 ‘the biancoceleste advantage arrives: Milinkovic throws himself into the depths as usual to act as a bank. This time, however, a magic is invented: with a scorpion, without looking, he serves Immobile, who comes from the center of the area, kicks on the fly and beats Belec. For the Serbian it is the eighth assist in the league. Three minutes later, the Lazio striker scores twice, this time with an empty net, served by Pedro, always unmarked on the right. Then Lazio consolidates possession of the ball, hiding the ball from Salernitana who, the very rare times in which it manages to recover it, struggles to overcome the half of the field with ball and chain. The only opportunity of the next 35 minutes is still Ciro Immobile who heads a free kick from Zaccagni: the ball hits the crossbar, bounces off the goal line but does not enter. The only two negative news for Sarri are the yellow for Cataldi, who was warned and will miss Atalanta, and Pedro’s calf injury (in his place inside Felipe Anderson).

SECOND HALF – Salernitana enters the field with a different attitude and immediately kicks twice towards the goal – something she had never been able to do in the first 45 ‘- but without danger, first with Bonazzoli, then with Gondo. The first chance for Lazio comes in the 55th minute, with a header by Zaccagni saved by Belec. At 63 ‘comes another bad news for Salernitana, who also loses Ranieri for the match against Napoli next week: the Fiorentina full-back is booked and was warned. After 20 minutes of nothing cosmic, Lazio closes the game. Felipe Anderson sees a Lazzari-style insertion from Lazzari and serves it with a perfect through ball. The grenade defense is very open and the former Spal full-back finds himself face to face with Belec, who beats with a low shot. At 76 ‘comes the second debut of the day for the grenades: 2003 enters Mario Perrone in place of Ranieri. At 85 ‘Immobile still touches the hat-trick, still with his head: this time it is a great save by Belec to deny him it. The only joy for the new president Iervolino arrives at 88 ‘when, from the half-empty stands of the Arechi (also an orphan of the curve, remained at home in protest against the measures taken by the government) a chorus rises in his honor. It ends 3-0. Lazio temporarily overtakes Rome and Fiorentina and is projected to sixth place in the heart of the Europe area. Salernitana remains last at 11 points, but with a lot of hope for a brighter future.