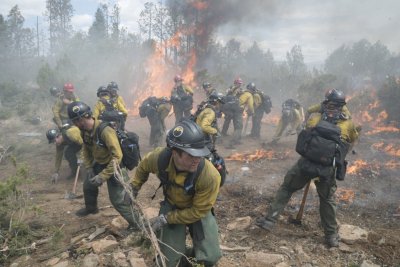 Fire Squad – Nightmare of Fire
Intense catastrophic drama based on a true story starring Josh Brolin, Miles Teller and Jeff Bridges. 2013: A group of firefighters have to put out a giant fire in Arizona.
(SKY CINEMA UNO HD at 9.15 pm / channel 301)

The life to come – Helself
Phyllida Lloyd directs a rebirth story with Clare Dunne. A woman runs away with her daughters from an abusive husband. Unable to find a house, he decides to build his own.
(SKY CINEMA DUE HD at 9.15 pm / channel 302)

Poly
Adventurous coming-of-age story with Francois Cluzet. A little girl befriends a circus pony. When he finds out that the animal is being tortured, he decides to help him escape.
(SKY CINEMA FAMILY HD at 21.00 / channel 304)

Hitman – The killer
Action produced by Luc Besson with Timothy Olyphant and Olga Kurylenko. A genetically engineered hitman must eliminate a Russian politician. He’s going to get caught up in an international intrigue.
(SKY CINEMA ACTION HD at 9.00 pm / channel 305)

Widow Winchester
Mystery and suspense with Helen Mirren. A psychiatrist evaluates the mental health of Sarah Winchester, widow of the gun manufacturer, convinced that her house is haunted by ghosts.
(SKY CINEMA SUSPENCE HD at 21.00 / channel 306)

Neither Juliet nor Romeo
Directorial debut for Veronica Pivetti in a film on the theme of homosexuality. A teenager, the son of separated parents, falls in love with a boy and decides to reveal him to his family.
(SKY CINEMA ROMANCE HD at 21.00 / channel 307)

Brubaker
A classic of the prison line with Robert Redford and Morgan Freeman. The director of a penitentiary pretends to be a prisoner to find out about the conditions of the prisoners and be able to improve them.
(SKY CINEMA DRAMA HD at 21.00 / channel 308)

But what does the brain tell us
Riccardo Milani directs Paola Cortellesi and a super cast in the blockbuster comedy. Giovanna puts her secret agent skills at the service of her friends to avenge them.
(SKY CINEMA COMEDY HD at 21.00 / channel 309)

Wanted – Choose your destiny
James McAvoy, Morgan Freeman and Angelina Jolie in an action inspired by the graphic novel of the same name. A mysterious woman introduces a shy employee into a secret society of executioners.
(SKY CINEMA UNO +24 HD at 9.15 pm / channel 310)

Anna Rosenberg
Claudia Gerini is the protagonist of a film about femicide. In a French police station, the dispute between a woman and a hostile policeman degenerates to tragic consequences.
(SKY CINEMA DUE +24 HD at 9.15 pm / channel 311)

The Chronicles of Riddick
Returned to civilization, Riddick (Diesel) lands on the planet Helion Prime and finds himself involved in a war against the Necromongers, a powerful race of conquerors led by the ruthless Lord Marshal.
(PREMIUM CINEMA 1 HD at 9.15 pm / channel 313, SKY DTT channel 463)

Never Back Down – Never give up
Jake Tyler is a collegiate American football player who reacts violently to an insult addressed to his dead father during a game. Moving to California in Orlando with his mother and brother who is a tennis player, Jack discovers that the video of the fight is already viral in the new high school. He falls for it again when during a party Ryan McCarthy, a strong beater provokes him, also insulting his father’s memory and ends up beating him. Recommended by Max, a young martial arts enthusiast, Jake decides to enter Jean Roqua’s gym to become a real fighter. However, the man does not want the workouts to be aimed at settling accounts outside the gym but for Jake the real goal is revenge. With Sean Faris, Amber Heard
(PREMIUM CINEMA 1 +24 HD at 9.15 pm / channel 314)

Bordertown
Lauren Fredericks, an ambitious journalist, is sent to Juárez, on the border between the USA and Mexico, where a series of murders of young women are taking place. With Jennifer Lopez, Antonio Banderas.
(PREMIUM CINEMA 2 HD at 9.15 pm / channel 315, SKY DTT channel 464)

I love you too much to tell you
Pietro and Francesca have always been engaged, their wedding is one month away. He works in a major law firm, and deals with divorces. She is a researcher at the University, and dreams of being able to win a competition and finally become a teacher. Their days are full of commitments: from organizing the ceremony to work, from friends to carving out moments just for them. And as happens when fate decides to be mocking, this delicate mechanism finds a way to break. It happens when Pietro accidentally meets Stella, a young actress who has come to town to shoot her first major film as a protagonist. Films with Carolina Crescentini, Jasmine Trinca and Francesco Scianna.
(PREMIUM CINEMA 3 HD at 9.15pm / channel 316, SKY DTT channel 465)

Cardi B against racists for whom “black rappers devalue Hermès Birkin”

5th Gala for Planetary Health, fundraiser for the health of the planet – Photo 1 of 12

The official Italian trailer of the miniseries with Kate Winslet, on Sky and NOW in June