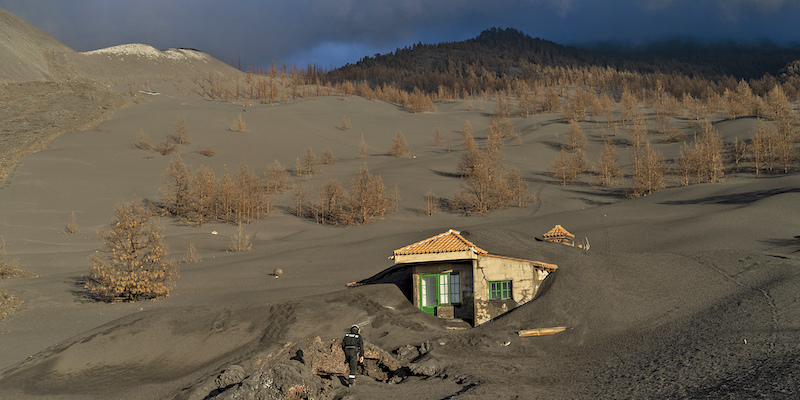 On December 25, after ten days of low activity, the eruption of the Cumbre Vieja volcano in La Palma, Canary Islands, officially ended. Now, however, the inhabitants of the island face a new problem: what to do with the millions of cubic meters of lava and ash that still cover part of its territory. An article from the Guardian.

The eruption of Cumbre Vieja – the longest in La Palma’s known history since 1585 – began last September 19: in the following 85 days it caused the destruction of 1646 buildings (of which 1.318 houses), 73 kilometers of roads and 369 hectares of crops. More than 7,000 people were evacuated and 2,300 of them lost their homes. The lava flow also created a large “delta” over the sea in the western part of the island, in the Las Hoyas area.

In recent days, around 2,000 of the evacuated people have been allowed to return to their homes. Many of them found them with layers of very fine ash that covered their roofs, verandas, courtyards, plants. «It’s a constant battle» says an inhabitant of the island: «today you clean it, tomorrow the wind accumulates a few centimeters again».

Attempts to collect the ash are actually proceeding with some results, and the one removed is accumulated in a former quarry and other places on the island identified for this purpose. The removal of the lava, on the other hand, is proving to be much more complicated, because the lava retains heat and, as the geologist Inés Galindo explained to the Guardian, in some parts it still reaches 100 degrees in temperature.
As the lava cools – a process that could take months – it may be easier to build on it than to crack and remove it.

To understand how to use all this volcanic material and make it a resource, researchers are, among other things, studying the history of the archipelago. In Lanzarote, for example, the eruption of 1730 left the island covered with porous volcanic material, capable of retaining the moisture of the soil. This allowed the inhabitants to plant the very particular vineyards for which the island is still famous today.
The researchers of La Palma are therefore analyzing the properties of the ash to understand whether it is possible to use it as a fertilizer, or as a material to build houses, roads and bridges on the island (with a technique that is actually very similar to that with which the Romans had used for their constructions the volcanic material generated by the eruptions of Vesuvius). To get answers, however, it will take a few more months.