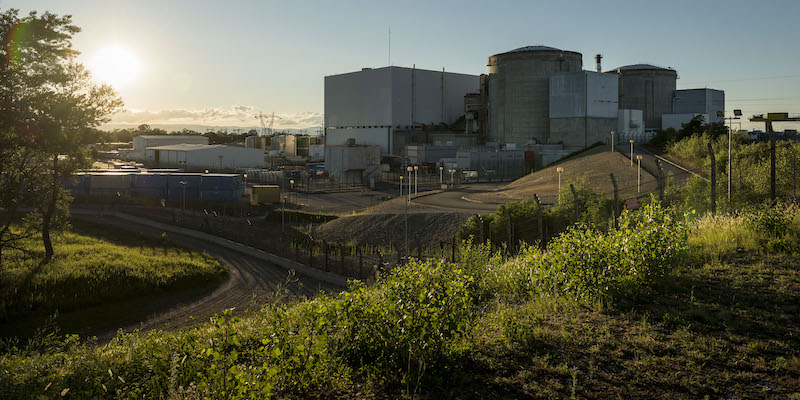 When French President Emmanuel Macron said in November that he wanted to build new nuclear power plants, as foreseen in his investment plan to revive the economy, the president of Alsace, Frédéric Bierry, had asked that the town of Fessenheim be taken into consideration for hosting one. Fessenheim has about three thousand inhabitants, is located on the border with Germany and when it comes to nuclear power it is not a place like any other: until a year and a half ago it housed the oldest nuclear power plant still operational in France, which for decades had been widely contested by German neighbors. Even today it is considered one of the symbols of the profound differences of views between France and Germany on the use of nuclear power.

The construction of the two pressurized water reactors of the Fessenheim plant began in 1970. The plant was inaugurated seven years later, becoming a pride and an essential activity for the inhabitants of the area: it employed more than 2 thousand people and taxes paid for by the plant, they made it possible to finance schools, sports activities and infrastructure for the community.

At the same time, when the reactors were switched on, the broadcasts of Radio Verte Fessenheim began, the first pirate radio in Alsace, born to protest against the power station.

Since 1986, after the Chernobyl disaster, Fessenheim was also at the center of the protests of the anti-nuclear activists of Breisach, the German city on the other side of the border, which lies along the river Rhine. Over the years the residents of Bresaich they had reported alleged dangers related to the various malfunctions of the plant, arguing, however, that in its construction the possible risks connected to the seismic activity of the area had not been taken into account. Now, after more than 40 years in business, it is in progress on decommissioning, i.e. the decommissioning process, which is expected to end in 2041.

At the time of the final shutdown of the plant in June 2020, activists and residents of Breisach celebrated. For the inhabitants of the French town, however, it was a very hard blow: Bierry spoke of it as a “financial”, “social” and “economic” scandal, and in the following months the residents continued to complain about the “financial impasse” brought about by the closure.

The situation hasn’t changed much today. The mayor of Breisach, Oliver Rein, said he considered the idea of ​​building a new nuclear power plant in Fessenheim “ridiculous”, also in light of a possible collaboration between France and Germany on shared renewable energy projects. According to Rein, Macron’s announcement may have been made to attract attention in view of the upcoming presidential elections, but like him all the other candidates said they were in favor of using nuclear power, if not willing to expand it.

An anti-nuclear demonstration on a bridge over the Rhine on June 29, 2020, on the occasion of the closure of the nearby Fessenheim nuclear power plant (Thomas Lohnes / Getty Images)

France is one of the main European Union countries that stand pushing so that nuclear energy is included in the list of economic activities that are sustainable for the environment and therefore worthy of investment. Germany, which in any case continued to prefer coal – the most polluting fossil fuel – as a traditional energy source, is instead shutting down its nuclear plants and favoring investments for the production of energy from renewable sources.

– Read also: This place could hold all of our nuclear waste

The differences on the future of nuclear power between France and Germany are at the center of an even broader debate, also because this week the European Commission should have decided whether to include nuclear fission among the energy sources worthy of investment as they are sustainable for the environment. . However, the decision was postponed to January because there are strong disagreements between the member countries, starting precisely with the two largest, France and Germany.

In any case, it is not certain that Fessenheim can really host a new nuclear power plant precisely because of the seismic risk in the region, which in the 1970s was actually underestimated. To this we must add the sure opposition of the neighbors: the new German Minister of Economy and Climate, Green Robert Habeck, is one of the politicians who had signed a letter of celebration for the closure of the old plant.