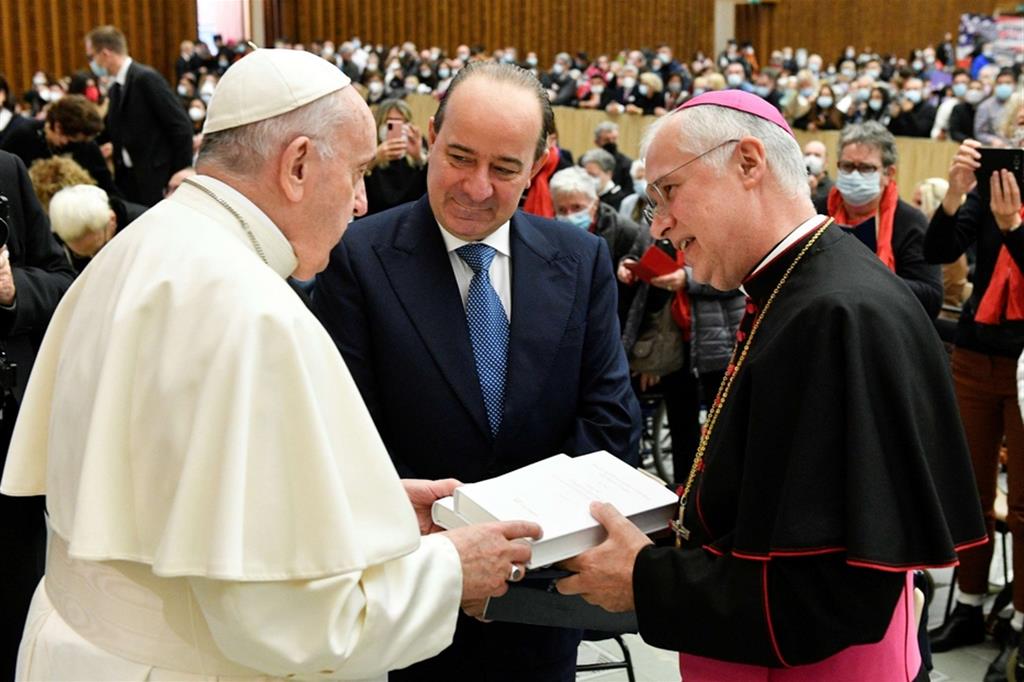 We publish the text of the preface that Pope Francis wrote for the volume in two volumes of the series «History of the Catholic University of the Sacred Heart» (volume III), which is dedicated in particular to «The Magisterium of the Church for the Catholic University of Sacred Heart », whose realization was overseen by Bishop Claudio Giuliodori, general ecclesiastical assistant of the university itself and published by” Vita e Pensiero “. The first copy of the two volumes was delivered yesterday on the sidelines of the general audience to the Pope by bishop Giuliodori himself and by the rector of the university, Franco Anelli. “The Catholic University has been a training ground for cultural development, Christian formation and paths of holiness”, Pope Francis writes in a passage in the preface of the work which consists of 998 pages. The first of the two volumes contains documents on the teaching of the Popes, from Benedict XV to Francis. These are speeches, audiences and messages that the Popes have addressed to the university in its first 100 years. The second volume, on the other hand, collects all the University Days of the Catholic University in which the Italian Church urges the faithful to also financially support the university of Italian Catholics. (E.Le.)

The celebrations for the centenary of the birth of the Catholic University of the Sacred Heart, which took place on 7 December 1921, offer us the opportunity to experience first-hand how fruitful and precious the educational work of the Church is, which in every time and in every context, under the action of divine wisdom, it offers renewed and effective proposals for the formation of the new generations. Among the many initiatives promoted on this occasion, the collection and publication of the Magisterium of the Italian Popes and Bishops addressed to the University founded by Fr. Agostino Gemelli.

I express my deep gratitude to my brother bishop Msgr. Claudio Giuliodori, general ecclesiastical assistant of the University, for having edited this work, which offers everyone the opportunity to consult a documentation as vast as it is rich in content. The quantity of magisterial documents reveals the concern that the Church has reserved for this academic institution, accompanying it with timely and valuable interventions from the very beginning and through all the phases of its development. The breadth and quality of the teachings show how important the educational mission is for the Church, in particular the commitment to high scientific and professional training in all fields of knowledge and human work, training that allows young people to make use of the gifts received and to make their contribution to the common good.

This involvement of the Italian popes and bishops alongside an academic institution certainly has historical reasons, linked to the complex relationship between the Church and Italian society after the unification of Italy; at the same time, it represents a singular prefiguration of what will later emerge clearly with the Second Vatican Council. Indeed, in the Declaration on Christian Education Gravissimum educationis, Catholic universities are invited to create «a constant and universal public presence of Christian thought in all efforts dedicated to promoting higher culture; moreover, these institutes must train all their students in this way, so that they become truly distinguished men in order to know, ready to carry out demanding tasks in society and to bear witness to their faith before the world “(n. 10).

In the extraordinary development of the University of Italian Catholics it can be seen how the Magisterium of the Church has played a role from time to time of support and encouragement, of guide and orientation, of cultural stimulus and evangelical impulse. The Catholic University of the Sacred Heart has been a true training ground for cultural elaboration, Christian formation and paths of holiness, of which the inspirer, Blessed Giuseppe Toniolo, co-founder Armida Barelli, who is close to beatification, the venerable Giuseppe Lazzati, the servants of God Ludovico Necchi and Giulio Salvadori. The history of the “Catholic” is a shining example of how effective and fruitful is the alliance between faith and science, theology and knowledge, the spiritual dimension and rationality. Through the texts collected in this volume it is possible to appreciate a variegated Magisterium, which has expressed itself not so much as a doctrinal guarantor of the faith, but rather as a leaven for the search for truth and for the promotion of dialogue with everyone and in every field of knowledge, in order to contribute to the full and integral development of humanity.

The peculiar history of the University of Italian Catholics, as repeatedly affirmed by the various Popes who accompanied its birth and growth, from Benedict XV to the present day, has something extraordinary and prodigious. Born in the troubled period between the first and second world wars, opposed by many parties and always struggling with enormous economic or organizational difficulties, it has been able to overcome every obstacle and progressively broaden the range of its educational and cultural action, to the point of becoming one of the most important Catholic universities in Europe and in the world. A story of which it is necessary to remember, also to express gratitude to the Lord and to all those who, starting from the founders, made a point of making it, in different eras, a luminous beacon capable of guaranteeing Christian formation and a qualified presence of Catholics in society.
Today, in a particular way, it is necessary to treasure all the progress made to face the present challenges and those of tomorrow. It is the same Magisterium, dedicated to the Catholic University of the Sacred Heart, which invites us to dare to face in a prophetic way the great questions facing humanity today.

Comforted by the journey made and aware that this Athenaeum and all Catholic universities are springing up ex corde Ecclesiae, we must know how to look to the future and to the fundamental task entrusted to academic institutions, the advanced frontier of the Church’s mission. As I wrote in the Post-Synodal Apostolic Exhortation Christus vivit, in the first place it is necessary to promote concrete choices for the “renewal and relaunch of missionary” outgoing “schools and universities, such as: the experience of the kerygma, dialogue at all levels, interdisciplinarity and transdisciplinarity, the promotion of culture of encounter, the urgent need to “network” and the option for the least, for those whom society discards and throws away “(n. 222). These are the indications contained in a particular way in the Proemio of the Apostolic Constitution Veritatis gaudium which constitutes the magna carta for the renewal of ecclesiastical universities and faculties, but also offers important ideas for Catholic universities.

Secondly, it is fundamental, and it is a specific task of Catholic academic institutions, to develop a new epistemology, which makes it possible to integrate traditional knowledge and personalistic anthropology with the demands of contemporary knowledge and with innovations in various scientific fields: from neuroscience. to digital communication, from the quantum and systemic approach to a wise and balanced use of artificial intelligence. “We cannot think of a new laboratory episteme, […] but of life yes. In this context, the university has a conscience, but also an intellectual and moral strength whose responsibility goes beyond the person to be educated and extends to the needs of all humanity “(Address to the participants in the international conference promoted by Fiuc New frontiers for university leaders: the future of health and the university ecosystem, November 4, 2019).

The contribution requested from Catholic universities is therefore essential, in the framework of the Global educational pact (cf. Message of 12 September 2019). In fact, they must train those who are called to measure themselves against the unpublished and, in many ways, dramatic critical issues of our time. Thanks also to this contribution, young people, with their initiative, can promote an inclusive economy capable of overcoming injustices and discrimination; promote sustainable development that respects our common home; overcoming divisions and prejudices to make a more fraternal and supportive society grow; to replace the culture of rejection and indifference with that of acceptance and co-responsibility.

But to do all this it is necessary to pass from an “aseptic” study, which risks abstraction and estrangement, to a knowledge that knows how to constantly measure itself with reality, always having at heart the truth, the common good and charity. I would like to express all this by paraphrasing what I wrote to Pontificia Universidad Católica Argentina: «Don’t be satisfied with one [cultura] table. Your place of reflection are borders. And don’t fall into the temptation to paint them, perfume them, fix them a little and tame them. Even the good ones [professori e studenti], like good shepherds, they smell of the people and the streets and, with their reflection, they pour oil and wine on the wounds of men “(March 3, 2015).

Inviting us to keep our gaze turned to the Sacred Heart of Jesus, in which “all the treasures of wisdom and knowledge are hidden” (With the 2,3), I wish your academic institution to keep alive the memory of all the affection with which the Church has generated it and of the rich teaching with which it has made it grow, in order to face current challenges with renewed enthusiasm, not less demanding than in the past. Mary, Seat of Wisdom, inspire, support and protect the path of the Catholic University of the Sacred Heart, so that it can look to the future while remaining faithful to its origins and identity, renewing the educational offer with courage and creativity and putting the best energy into it. at the service of the mission of the Church and of an unavoidable social change. 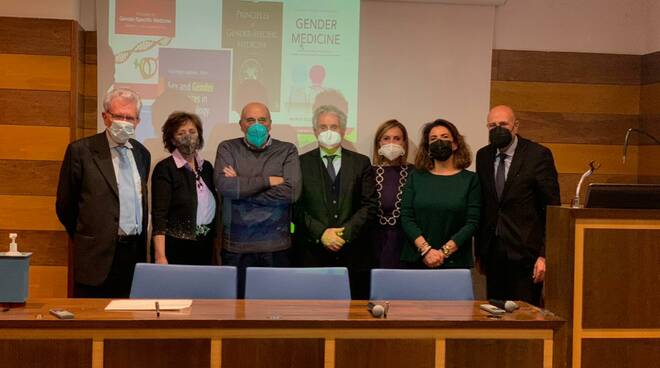 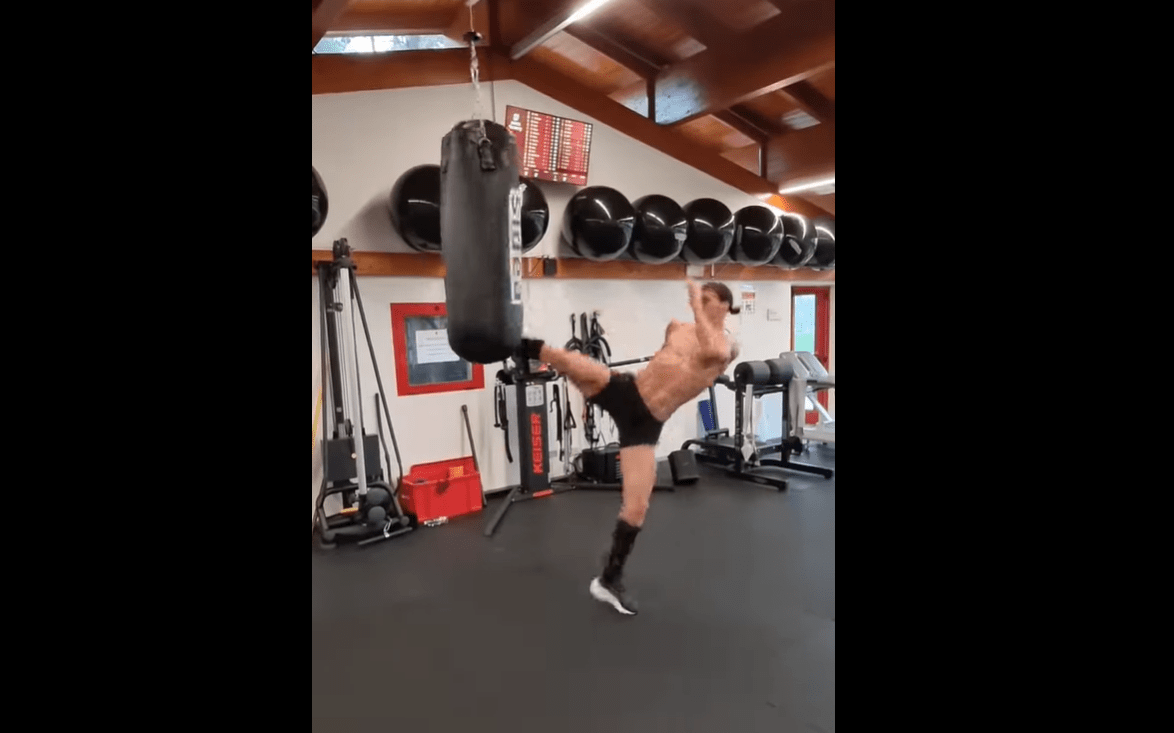 Ibrahimovic charges up in the gym: “You must be like water”

Influenza vaccination, from Monday 8 November also in the pharmacy