All or almost as expected, in the Apple event broadcast live in streaming from Cupertino. A new iPhone SE, new iPad Air and news in the Mac world. The Californian company continues to push on the product front, in short. Especially with the launch of the new cheap iPhone that aims to nibble customers in market segments that are usually not very agile for Apple. So let’s start with the new iPhone SE, presented as “powerful” and “iconic”.

For those who imagined an inexpensive iPhone that would upset the design of previous models, there is a substantial disappointment. Apple does not abandon the architecture already seen, the one that made the history of the latest iPhones from 5 to 8 (before the arrival of the X model, in short). And then the classic central button for the famous (and in some cases regretted) Touch ID button. And usual accentuated edges. A somewhat disused style. However, some characteristics change. And they are not trivial. The glass, for example, is the same used for the iPhone 13 Pro and iPhone 13 and is – according to Apple “the most resistant mounted on the front and back of a smartphone.” A15 Bionic which in fact promises a very fluid use of this smartphone, with worthy performance also in terms of autonomy. From Apple data, iPhone SE is up to 1.8 times faster than iPhone 8. Plus there are the latest machine learning innovations, with features like Live Text in the camera app and on-device dictation. Furthermore, iPhone SE has 5g connectivity. It is coming in 3 different colors. midnight, galaxy and product red. It will be available for pre-order starting Friday 11 March and will be available starting Friday 18 March. Three models provided: 64GB, 128GB and 256GB. Price: starting from 529 euros. 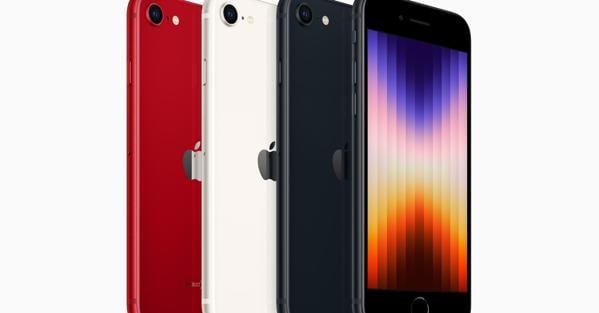 Fresh air also on the iPad front. Apple has unveiled the new iPad Air with M1 processors, a processor made in Cupertino that has already made its debut on Macs and on the iPad Pro. It is a nice upgrade, compared to the 2020 Air model, because the performance is higher than 60 %, according to Apple. Interesting is the Center Stage technology in the front camera (12MP), which manages to frame users – even on the move – during a video call. The rear camera records video in 4K and, in the cellular version, this iPad supports 5g connectivity. The design is interesting: 10.9-inch Liquid Retina display, thin edges and touch ID integrated into the top button (as seen on the latest iPad Mini). The new iPad Air will also be available for order starting Friday 11 March and will be available starting Friday 18 March. The iPad Air Wi-Fi models are priced from € 699, while the Wi-Fi + Cellular models start at € 869. Variable capacities: from 64GB and 256GB. Available colors: space gray, galaxy, pink, purple and blue.

M1 ultra and the new Mac

But this Apple event was useful to the Cupertino house to present its innovations in the Mac field. Starting with a new processor, the M1 ultra, which extends the Apple Silicon family. It is a processor designed especially for stationary devices (desktops), and promises great performance. M1 Ultra can be configured with up to 128GB of high-bandwidth, low-latency unified memory, accessible from the 20-core CPU, 64-core GPU, and 32-core Neural Engine. The basis of the M1 Ultra is the M1 Max chip, while the new Mac presented is the Mac Studio, with the Studio Display monitor. This is a fairly new desktop solution for Apple. Mac Studio is actually a slightly larger Mac Mini, but with much higher performance. Clearly the price varies according to the configuration (you can also choose the M1 Max processor, or the new M1 ultra). It is on sale starting at 2,349 euros. Studio Display is a 27 ”monitor with 5K retina technology. It can be used both vertically and horizontally and is equipped with a camera and speakers that promise new and interesting performances. Studio Display is on sale for 1,799 euros.