With his double signed against Honduras (3-0), the Argentinian Lionel Messi now exceeds his eternal Portuguese rival Cristiano Ronaldo in the ranking of scorers without penalties.

By registering his 87e and 88e goals in the national team, the 35-year-old Argentine captain now has an incredible total of 674 goals scored during his career, not counting penalties, or 3 units more than CR7, currently at 671.

While waiting for the Qatari World Cup, “La Pulga” signs an impressive record, especially with 144 fewer matches in the legs than Ronaldo. 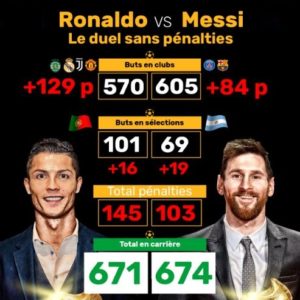