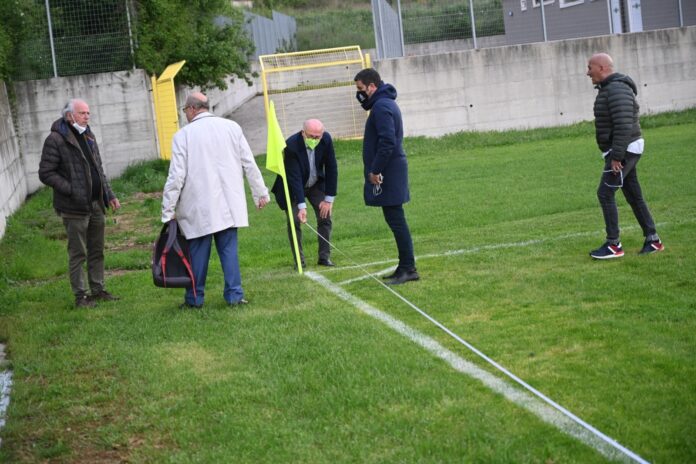 Mercogliano Stadium, there is approval. “A Serie A field”. The engineer Lucio De Rosa, technical consultant for sports facilities of the Coni regional committee and trustee of the Campania FIGC, has no doubt.

This afternoon, under a thick and auspicious rain, the final go-ahead for the game activities of the sports field in via Ramiro Marcone has arrived, which will be officially put in black and white in the coming days.

The meeting that was held at the municipal stadium was decisive, in which, in addition to the Neapolitan engineer, also the technicians who built the system, the provincial delegate of Coni, Giuseppe Saviano, the president of the Municipal Sports Council took part. and Entertainment of Mercogliano, Bruno Iovino, the municipal councilor delegated to Sport, Antonio Della Pia, the president of the municipal council, Barbara Evangelista and the mayor, Vittorio D’Alessio.

“It is a beautiful sports field, with natural grass, there are few in Campania like this,” says De Rosa. “It has the right dimensions to also host Serie A championships, I found the grass in excellent condition, the changing rooms are perfectly compliant with Coni standards. Indeed, after those of the San Paolo-Maradona in Naples, these are the largest changing rooms I have seen. This stadium will be a real flagship for the whole province of Avellino and beyond “.

The sports field of Mercogliano will be approved in the measure of 110 × 68, or the top. It is certainly one of the most modern facilities in Irpinia: six changing rooms, an infirmary room, services for the disabled. The approval for now is that pursuant to articles 60 and 80 of the Consolidated Law on public safety, for a capacity of 199 spectators.

This is waiting for the grandstand capable of hosting up to 1,000 spectators to be built with the financing for the second lot of the works.

The project for the completion of the field will be presented on May 19th, during a public demonstration.

Enthusiastic about the result achieved also Bruno Iovino. “On February 10th, when I took office, I made the commitment to obtain the homologation of the field as soon as possible. We did it in less than 90 days. We are really satisfied, the city of Mercogliano will be given one of the best sports fields ever ”.

The town on the slopes of Montevergine, therefore, after 30 years, regains possession of its sports field. Great work carried out by the D’Alessio administration. “We had made a commitment with our city, especially with young people, and we respected it,” says the mayor.

The “Mercogliano Stadium”, next summer, could host the withdrawal of Avellino football. At the moment, a dream. Which, however, could become reality. Mercogliano dreams. And he has the right.