Rihanna and A$AP Rocky made their first public appearance this weekend since the rapper’s arrest.

They were spotted surrounded by friends this Saturday, April 23 at the Giorgio Baldi restaurant in Santa Monica, Calif., People reported.

“It was a happy and relaxed group. Rihanna looked great. She sat next to A$AP and they were affectionate,” a source told the magazine, adding, “They had dinner for a few hours. The focus was on Rihanna and the baby.”

As a reminder, A$AP Rocky was arrested by the police when he got off the plane from Barbados. The LAPD is investigating a shooting during which Rihanna’s companion fired several times at a man who escaped with only minor injuries, one of the bullets having grazed his hand.

Hours after his arrest, A$AP Rocky was released on bail. The rapper paid the sum of 550,000 dollars (500,000 euros) to find freedom. He faces a one-year prison sentence.

“Rihanna was there when Rocky was arrested and cried nonstop (…) These are very serious charges, it’s a nightmare scenario for her,” a source told The Sun. A new blow came just days after rumors of infidelity from the young man. 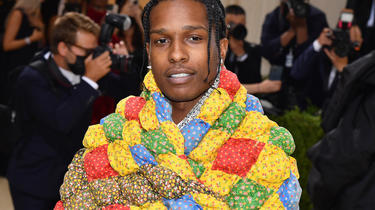 This first public appearance since the arrest tends to prove that their relationship resists these upheavals.

since ASAP Rocky was arrested Rihanna was spotted with him a restaurant for the first time. https://t.co/m7yakUX6Ah

As she has become accustomed to since the beginning of her pregnancy, Rihanna wore an outfit that showed her rounded belly.