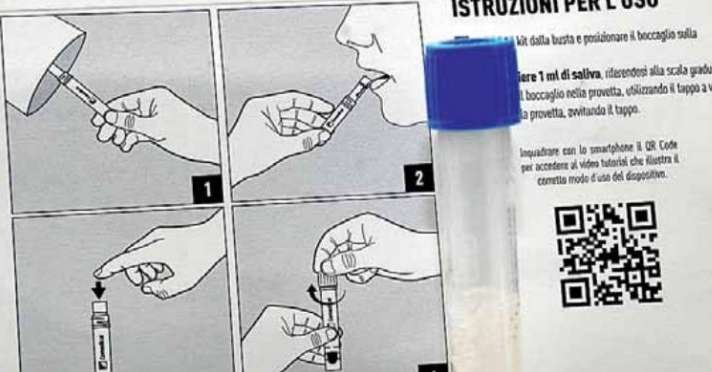 TRENTO. 2021 was supposed to be the year of salivary swabs, less annoying and reliable tests that one could do at home and then deliver to the laboratory for analysis. And yet the project has not yet taken off. To date, the Healthcare Company relies on antigenic tests carried out in large quantities by pharmacies and on molecular, more reliable but more expensive, difficult to book and with longer reporting.

Has the salivary project failed? Far from it. At the end of last year, the health authority approved the extension of the collaboration agreement with Cibio for the conduct of molecular tests of saliva. And the budget is far from derisory.

“The expenditure deriving from the execution will be a maximum of 3.9 million euros”, reads the resolution.

A very large figure, especially if we consider that currently only the saliva tests of the “sentinel” project are analyzed at the Cibio. wanted nationwide to monitor the virus in some schools.

“A thousand tests every two weeks,” confirms the virologist Massimo Pizzato, head of the Center. Very little compared to the potential considering that the Center could carry out up to three thousand salivary tests a day and therefore currently not being used for what it could offer.

“I knew nothing of the resolution – says Pizzato – I knew that the agreement was about to expire but there were no meetings or communications to expand the use of salivaries.

The only thing is that for a few days we have been collaborating in the analysis of nasopharyngeal molecular swabs to help the overworked laboratories of the company“.

If a year later Apss has not shown interest in this type of test, why invest such a high amount again?

Or, if the company believes it why has so much time been wasted?

“We are monitoring the epidemiological situation to make the best use of these tests also in the light of the ministerial circular,” said general manager Antonio Ferro.

«The laboratory of the University of Trento for salivary tests is a reality. The laboratory technicians – ten recent graduates with an average age of 25 – have already been recruited, the machines have arrived and have already been tested, the spaces on the first floor are set up and organized to accommodate thousands of test tubes per day “, yes it read in a February 21 press release.

Since then, Pizzato and his team have always kept themselves ready for an increase in tests to analyze that has never happened to date.

In the resolution of the last few days the reasons for the allocation are not clear. We only read general considerations on the advisability of continuing the collaboration “considering the current trend of the pandemic which requires constant attention to the development of diagnostic tools and having taken note of the guidelines of the Ministry of Health which recommend the use of salivary tests in monitoring the pandemic trend especially in some categories of the population (children and the disabled).

A potential, that of the salivaries, which could be exploited more in this moment in which Omicron seems to be able to “pierce” the rapid antigen tests.

«A technique more critical to virus mutations – explains the virologist. – The antigenic swab, which is based on antibodies that recognize the spike, is more sensitive to spike mutations while the PCR, which are molecular swabs, detect the virus more precisely even if there are mutations ».

Not only. The antigenic swab has the human factor in addition, which means that a lot depends on how the swab is performed, how deep the operator takes the material to be analyzed. Estimating false negatives seems impossible.

“The problem is the mutations that make the antibodies used in antigen tests insensitive”, confirms Pizzato. Despite this, in light of the dizzying increase in demand, the Trentino health authority but also other national entities have authorized both antigenic tests for the beginning and for the end of the disease also because there was no possibility to meet the demands with the molecular.