The sad death of Wolfgang Petersen has left us memories of his best films (‘The Neverending Story’, ‘In the Line of Fire’) but also of all those movies he never made for one reason or another. And there is one that stands out among all the others: his own version of ‘Batman V Superman’… fifteen years before the confrontation directed by Zack Snyder.

2002. Two years ago Wolfgang Petersen directed ‘The Perfect Storm’ and since then many things have happened in the world. Mainly, 9/11, which changed everything we knew and the cinema that came from the United States. The Superman and Batman franchises are dead after ‘Superman IV: The Quest for Peace’ and ‘Batman and Robin’, and nobody seems to have much interest in resurrecting them because they are considered box office poison.

Think that this was another world different from the current one, and superhero movies were not an almost guaranteed success: ‘Iron man’ was still five years away and putting batman and superman together would be a risky move rather than a money printing machine. Andrew Kevin Walker, who came from writing ‘Seven’, ‘Murder in 8mm’ and ‘Sleepy Hollow’ prepared a script that Petersen immediately joined with the idea of ​​showing a conflict between both heroes, already tall, based on the ideology and trying to reflect the moral ambiguity of a country still hurt by the terrorist attack.

In this ‘Batman Vs Superman’ there would be no origin story: The two heroes and their gallery of villains would already be well known to all and the rivalry between the two could not be darker and full of drama. Did you think that Zack Snyder was too scary? That is because you don’t know what Petersen wanted to do in 2002.

Little is known about the plot of ‘Batman Vs Superman’, but we do know part of it: the film would start with the death of Alfred, which would join those of Robin and Commissioner Gordon and that of Bruce Wayne’s wife, murdered by the Joker, would follow. But before Batman beats his face to a pulp, the Clown of Crime blames Superman, who has been best man at Bruce’s wedding, and the Lord of the Night approaches Metropolis to spank him. For his part, Clark Kent is trying to get over his divorce from Lois Lane so he’s not exactly at his best, even though he just started a romance with Lana Lang in Smallville. Come on, more long faces impossible.

It’s a classic post 9/11 character treatment, existential emptiness, mourning and grief move the characters. Before putting a camera in place, Warner set both a release date for it, in the summer of 2004, and leading actors: Johnny Depp, James Franco or Paul Walker were considered, but the two chosen were Jude Law as Superman and Colin Farrell like Batman. Fate wanted twenty years later Farrell to play the Penguin in ‘The Batman’. The Hollywood Wheel.

The script entered a rewrite phase by Akiva Goldsman (‘A Beautiful Mind’, ‘Batman and Robin’), who actually made a joke years later in the opening sequence of ‘I Am Legend’, but Warner stopped all plans dead when JJ Abrams handed in a script for the future Superman movie: ‘Superman: Flyby’, a reboot of the character that also meant the beginning of a new trilogy that McG was going to direct and came to nothing. 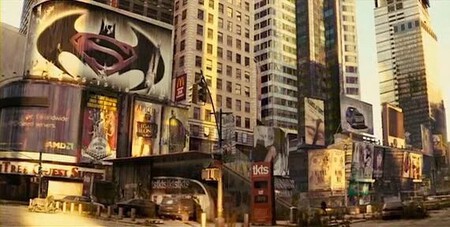 The aftermath of the confrontation (which did not happen)

Not that Wolfgang Petersen fought hard for his film once Warner canceled it: he immediately got into the production of ‘Troy’ (which the producer offered him as a consolation prize). The void that ‘Batman vs Superman’ left in future superhero releases caused, in the long run, that instead of trying to mix damaged franchises reboots will be created first to try to repair them.

Thus were born, in the long term, ‘Superman returns’ and ‘Batman Begins’, which they made people forget about the latest failed sequels and they could join the superhero trend without having to explain. But, in addition, in the short term, it caused the release of ‘Catwoman’, with Halle Berry, for take advantage of that summer of 2004 that Petersen’s film had left free.

petersen he would only direct two more films before leaving us (‘Poseidon’ and ‘Four against the bank’) and as for the future of action movies coming out of the vignettes, we all know what happened. Worth this anecdote from one of those movies that we will never see to honor the memory of a unique director. Rest in peace, Wolfgang Petersen.