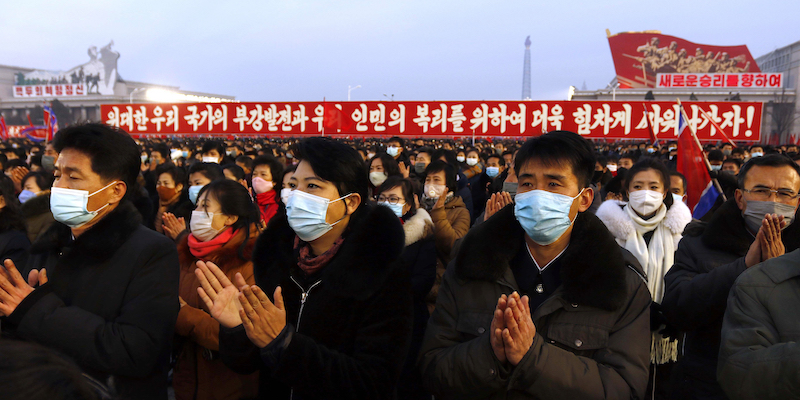 To date, according to data from the World Health Organization (WHO), there are only two countries in the world that have not yet started a vaccination campaign against the coronavirus: North Korea and Eritrea. The authorities of North Korea continue to argue that the pandemic in the country never arrived, and the very strict restrictions imposed since the discovery of the first cases in China still seem to be the only tool used to counter the circulation of the virus, with heavy consequences. In Eritrea, as in most of the countries of the African continent, the fourth wave of the epidemic is underway, but the authorities of the country do not seem to want to collaborate with the international assistance bodies.

In September, the North Korean regime of dictator Kim Jong-un rejected nearly 3 million doses of the vaccine developed by the Chinese biotechnology company Sinovac that had been offered to it by Unicef ​​as part of the COVAX program, which aims to facilitate the access to vaccines for the poorest countries. North Korea had argued that other countries needed it more. As early as July, the country had rejected around 2 million doses of AstraZeneca’s vaccine, citing alleged side effects, and was also offered various doses of the Russian-made Sputnik V vaccine during the same period, which it is unclear whether she accepted. .

In recent months, the COVAX program has set aside 4.73 million doses of the coronavirus vaccine produced by AstraZeneca for North Korea, which however continues to seem reluctant to accept them: despite strong doubts that the epidemic never arrived in the country, the authorities continue to argue that they want to manage the possible spread of infections “in their own way”, that is, with isolation from the rest of the world and not with vaccines. However, the serious consequences of the restrictions in place for two years have been visible for some time.

To avoid the spread of infections, the North Korean regime had decided to close its borders since the first cases were found in the Chinese city of Wuhan, effectively renouncing the exchange of goods with China, the only large economy that maintains good relations with North Korea. However, the closure of the borders has blocked not only food imports, but also those of fuel and fertilizers essential for agriculture, exacerbating the problems. According to the South Korean newspaper Daily NK, which has sources inside North Korea, today middle-class North Koreans eat two meals instead of three and the country’s economic situation “is clearly worsening.”

Professor Park Won Gon, an expert on North Korean studies at Ewha University in Seoul, told American radio VoA that it is not known how far the country will be able to move forward in this situation: according to some analysts cited by Park, the North Korean economy may not hold up beyond the first half of this year. From some satellite images it would appear that North Korea is building various decontamination centers, presumably intended to facilitate imports from China: as he noted VoAHowever, these attempts may not completely solve the problems, given that in recent times China itself has begun to introduce very heavy restrictions to limit the spread of infections, putting the global trade network even more in crisis.

The other country that according to the WHO has not yet started vaccinating its population against the coronavirus is Eritrea, a country in the Horn of Africa.

As pointed out on several occasions by the Africa Centers for Disease Control and Prevention – Africa CDC, the international organization that coordinates African countries in the fight against diseases and epidemics – Eritrea is the only country on the continent that does not provide data to the organization and the only one that has not yet started the vaccination campaign. The last two African countries that had accepted aid from the international community and authorized the administration of vaccines at the end of July were Tanzania and Burundi. Eritrea has not yet done so, despite a fourth wave of the epidemic in the country.

According to the most recent report from the Africa CDC, the pandemic has reached its fourth wave in most African countries, including Eritrea and the two largest countries with which it borders, Ethiopia and Sudan. In other East African countries, including Kenya and Somalia, a fifth wave is underway. From December 6 to January 2, cases of contagion across the continent increased by 36 percent compared to the previous four weeks and deaths from causes related to COVID-19 increased by 8 percent. At the time of the analysis, published on January 6, the omicron variant of the coronavirus was found in 33 African countries, responsible for the large increase in infections in Europe and other parts of the world.

The available data say that so far in Eritrea about 8,500 cases of contagion and 84 deaths from causes related to COVID-19 have been ascertained in a population of about 6 million inhabitants, and in the last week about fifty new cases have been found. day. Despite the fact that, according to Unicef, the country has maintained a good vaccination system against other diseases during the pandemic, Eritrea has not yet accepted the vaccines proposed by the COVAX program: according to some activists and analysts cited by Vice, the reasons would be mainly political, linked in part to international pressure for the conflict in the Ethiopian region of Tigré, and in part to the idea that accepting the vaccines of the program would increase the influence of the West on the country.

According to the report’s data, as of January 6, 9.8 million coronavirus infections (3.3 percent of cases recorded worldwide) and 230 thousand deaths had been confirmed throughout Africa. However, only 9.6 percent of the African population is fully vaccinated. As of December 30, most African countries did not exceed the WHO target of 10 percent fully vaccinated population set in September. The WHO recently set a new goal of vaccinating 70 percent of the population in all African countries by June 2022, but due to weak health services, lack of funds and limited quantities of vaccines, forecasts do not they are optimistic.

– Read also: For the vaccinated, COVID-19 is something else