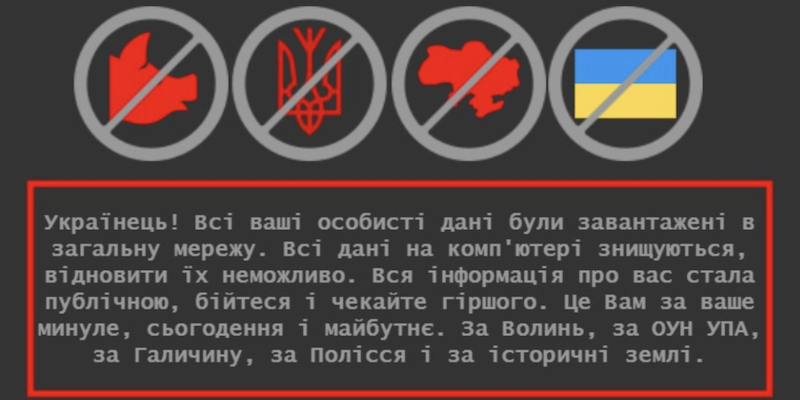 Several websites linked to the Ukrainian government were hit by a large and coordinated cyber attack on Friday. Among the sites involved, about fifteen in total, are those of the Foreign and Education Ministries, the Ukrainian embassies in the United Kingdom, Sweden and the United States, and that of Diia, the administrative services portal that also includes information on coronavirus vaccinations and vaccination certificates. It is currently unclear who is responsible for the attack. A spokesman for the Ukrainian government, however, suggested that Russia may be behind it, which had carried out similar attacks in the past.

A message written in Ukrainian, Russian and Polish appeared on the affected sites saying that the personal data of all Ukrainians had been stolen and made public on the Internet. The message warned to “be afraid and prepare for the worst” and among other things contained references to some disputed territories between different countries and to UPA, the military wing of the Organization of Ukrainian Nationalists which fought in the period of the Second World War for independence from the Soviet Union.

According to the first analyzes of the Ukrainian security service SBU, no personal data was disclosed and the contents of the sites were not modified.

The Ukrainian government said some sites have already been restored, while others are still offline for security reasons. SBU added that in 2021 within nine months it had “neutralized” about 1,200 similar cyber attacks or hacking attempts, many of which are believed to have been carried out by Russia, which has long sought to strengthen its influence in Ukraine.

NEWS IN KYIV: Several Ukrainian government websites down due to a major a cyberattack. Below is the @MFA_Ukraine website now. It reads in part: “Ukrainians!… All information about you has become public, be afraid and expect worse.” Sites of MOD and Education ministry also down. pic.twitter.com/3lbA06Q3Fl

The attack came the day after the United States warned of the possible risk of an imminent invasion of Ukraine by Russia, which for nearly two months has been amassing tens of thousands of soldiers near the eastern Ukrainian border. In recent days, talks had been held between Russia and the United States, with the aim of reducing tension and averting a Russian military intervention: the negotiations, however, did not lead to anything concrete.

– Read also: The stalemate between the United States and Russia over Ukraine