Javier Aguirre He must be one of the most relaxed, open and colloquial coaches in the press conferences. He usually uses a vocabulary with many very Mexican wordsbut precisely that caused some controversy in Ghanacountry of origin Iddrisu BabaMajorca player whom the Vasco referred to as “negrito”.

In the press conference after Mallorca’s victory against Atlético de Madrid -one of the former teams of the Mexican helmsman-, one of the questions was about the state of health of Baba, who left the field on a stretcher after receiving a tremendous ball to the face. Casual and very much in his style, Vasco Aguirre said to be aware of “his black” to see how it went.

“How are you, my little black?”, the Mallorca coach asked the Ghanaian in the locker room. He immediately asked the press present to It will not be taken as something racistexplaining that in Mexico it is a word of affection when said in diminutive and stated that “this is how I address my children with other words”.

In Ghana they say: ‘No one says ‘my little white’, why if the black?

The portal Ghana Soccernet dedicated a space to Javier Aguirre’s comment on Iddrisu Baba after the ball that Thomas Lemar gave him at the end of the duel. The media detailed that the Mexican clarified that he was an “affectionate expression” for the footballeralthough the readers did not agree with it, causing some controversy in this regard.

Some of the responses in English to the news on the aforementioned site criticized the racial reference made by Vasco Aguirresaying that “it is superfluous” to indicate the color of the skin or that “no one says ‘my little white'” in those kinds of situations. 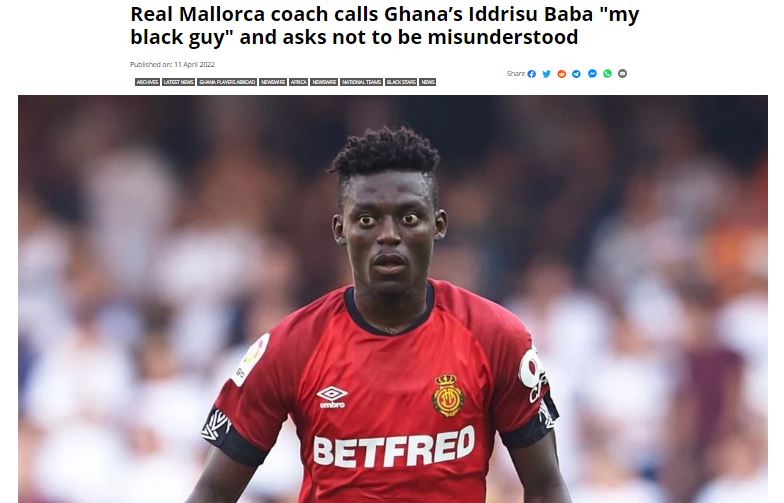 The Mallorca midfielder spent the night in a sanatorium, but as soon as Sunday he was in the gym fully recovered from the impact, so he will be available to Aguirre for next Saturday’s game in Elche. The Ghana national teamwith Baba in the starting eleven, qualified on March 29 for the Qatar World Cup 2022 by eliminating Nigeria.