A new celebrity said goodbye to the competition in “The House of Famous” 2.

During the broadcast of this Monday, June 06 of “The House of the Famous 2”, a new celebrity said goodbye to the competition after being eliminated by the popular vote of the audience. Among the group of nominees in this fourth round of eliminations were: Natalia Alcócer, Laura Bozzo and Eduardo Rodríguez.

Laura Bozzo was the first contestant to return to the house after being saved by the viewers’ vote. Returning to the house, Bozzo said: “Public, thanks. Thank you very much, public”.

Natalia Alcócer was the second saved participant of the night. “Thank you thank you thank you. Girls, I love you. Thank you, long live Mexico, ”said Alcócer after learning that she will continue in the competition.

Eduardo Rodríguez became the fourth eliminated from the second season of “La Casa de los Famosos” after obtaining a total of 54% of votes against him.

Daniella Navarro was one of the participants who was most affected by Rodríguez’s surprise departure, because she had a very close relationship with the Mexican actor.

“I feel a bit sad, really. I hoped to have a little more opportunity in the house”, were the first statements by Eduardo Rodríguez after officially becoming the fourth eliminated from La Casa de los Famosos 2.

“Finally”, “How unfair that they do this”, “What a scam, it was Natalia who had to leave”, “Finally came out”, “Votes do count, karma does exist”, were some of the reactions on the networks Telemundo social minutes after Rodríguez’s departure.

Know the rules to vote in “The House of the Famous” 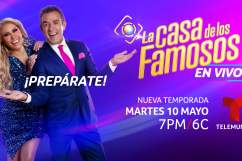