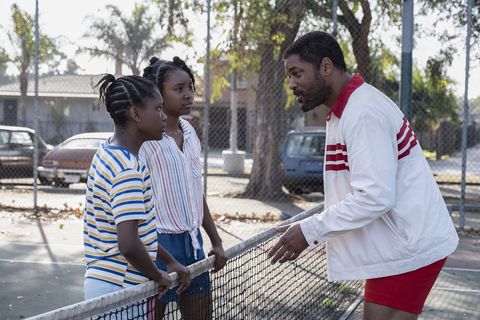 For Richard Williams (Will Smith), life has only one purpose: to allow his two daughters Serena (Demi Singleton) and Vanessa (Saniyya Sidney) to become professional players. He is sure, they can make tennis history. But in Compton, in one of the less edifying neighborhoods of that gigantic and violent beehive that was 90’s Los Angeles, it is anything but easy, especially when you have three other daughters to look after along with your second wife Oracene Price. (Aunjanue Ellis). The money is scarce, nobody believes in him, self-taught coach who in an environment of whites only, appears to most a madman, a smoke salesman or one who does not know what he is talking about, as he wanders around armed with videotapes and a simply logorrhea asphyxiating. But Richard has a plan to guide his daughters to success, a plan he created well before they were born and will do everything to put it into practice, even at the cost of making them and the world hate him. In a short time, your dreams for the two young promises seem to come true, but are they really their dreams too? Or did he do everything he did primarily for himself and his ego?

Even those who are not passionate about tennis are perfectly aware of the incredible importance, of the total break with the past that Serena and Vanessa Williams represented, among the most incredible and strong players of all time, the first African Americans to break through in a sport historically. dominated by whites. Reinaldo Marcus Green with King Richard creates an atypical biopic, which more than about the two sisters, similar yet very different in talent, expression and personality, focuses above all on the creator of their sporting myth. No other actor but Will Smith could have played this gruff, stubborn, intractable and fickle man so well. Finally we see him return in great shape, after several years spent in the service of wrong films and quite inert scripts. Here the film dominates from the first to the last minute, also thanks to a very accurate work on physical expression, on the movements, on making Richard Williams a sort of bear, tireless and always hungry for dreams, goals, but also for power. No surprise that he received the Golden Globe for his performance, which perhaps will be followed by the Oscar as a protagonist.

The 145 minutes of this King Richard, to be totally honest you only feel in a few moments, because the screenplay by Zach Baylin, but above all the direction of Green, avoids downtime, drops in rhythm but above all until almost the end they are devoid of any rhetoric, pietism or vainglory. More than a film about sports this is perhaps a film about the pursuit of success, about focusing one’s goals, about the best way to achieve them. All through an ultra-accelerated path of growth, which led two young girls to have to endure incredible pressures, a competition made even more fierce than racism. However, Serena and Vanessa must also deal with this father-master full of passion, affection, capable of enduring all violence and humiliation for them, but also often oppressive and insensitive. In addition to the wife played by a talented Aunjanue Ellis (who on a couple of occasions almost steals the show from Smith), there is also Jon Bernthal. His Coach Rick Macci, armed with a bowl hairstyle that was already a crime in those nineties, is his alter ego, he is a man made of energy but also of sensitivity, of that respect for others that Richard does not know what he is .

King Richard it will probably make more than a few of our pens turn up their noses in seeming to talk to us about another American dream, as well as in some small forcing, in which perhaps the political element is inserted with a little malgrace. But there is no doubt that this is a film that does nothing to make its protagonist pleasant, indeed the most interesting element is that he is esteemed, respected, but never manages to love him completely. This is due to his authoritarianism, his frequent insensitivity and self-centeredness. It can also be said that it also represents an excellent cinematic exemplification of the concept of patriarchy, in a Compton where gangs of thugs roam, where there is no solidarity and even less no hope of having justice. A sine qua non absolutely essential is therefore to make the effort to understand that this is above all a film about America, about that toxic dimension of individual success, which still today dominates its social and cultural dimension.

Another factor that makes it King Richard a successful and powerful film, in addition to that of leadership, the exercise of a decision-making power that masks fragility and insecurity, is how it speaks to us about the world of tennis. Those were still the years in which there was no legislation that would stem the phenomenon of baby phenomena, an industry that mangled futures and souls. The yuppie myth had survived history in that environment that is still mentally violent today, but above all it is deeply classist and ferocious. At various times it can bring to mind that masterpiece that it once was He Got Game with which Spike Lee spoke to us about the anger of emerging, the toxicity of imminent success. King Richard it brings to mind, not only for a fascinating yet unpleasant father figure, but also because it shows us the absolutely different nature of sports culture in the United States, compared to that of Europe. Overseas sport is often the only hope of emerging, of improving one’s existence and that of loved ones for those who are poor or marginalized. Something absurd, the manifestation of a social elevator that from the collective point of view is inert.

This is therefore a film that manages to make us passionate about its protagonists, to that racket that made those two sisters gods and points of reference. But it remains a film that does not necessarily hide the ferocity of US society. In the end, there remains a fundamental doubt within this film, that is, if success and happiness are really the same thing, if a father has the right to plan the whole existence of his daughters from the earliest years, if he is really doing so. their good. The film does not give a clear answer on this, it simply tells us that in this case, for an incredible series of coincidences, for the stubbornness of that man who is often peasant and intractable, for the talent he knew how to make use of, the history of tennis has changed, their life has changed. Of course, we are a long way from the epic featured in Rocky, as well as the morbid fascination with a contradictory and merciless universe seen in on Every Damn Sunday. But he still speaks to us of the need to be true to oneself, to move forward despite everything and everyone, as long as our dream is really ours.