Food alerts often warn us about purchased products that are part of withdrawn lots and that we shouldn’t eat at all. This time it is a very consumed product, let’s find out which one.

It is about the Fiorucci Pollì chicken and turkey frankfurters, due to the salmonella present in the product, the lot was withdrawn from the shelves of supermarkets and shops. The risk of Salmonella contamination was communicated by a circular from the Ministry of Health.

Why the sausages have been withdrawn

It is a type of called frankfurter “Pollì”, come in a pack of 3 per 100 gramsthe house that packed them is Fiorucci which operates in the Santa Palomba plant in Pomezia, near Rome.

To be exact, we are talking about the following Il lot that we have reported below the number 226004800 expiring on June 27, 2022. From which it is clear that the reason for which the lot was withdrawn is precisely the risk of salmonella.

This means that all those people who have gone to the supermarket or in the neighborhood shops and bought this lot must absolutely not consume it because there is a very high risk to health.

Let’s go into the specifics of the dangerous salmonella which is characterized by bacilli ferment glucose producing gas, degrade sulfur proteins, reduce nitrates and do not produce cytochrome oxidase. Most are non-fermenting lactose.

The bacilli of the genus Salmonella are present in the environment, in the soil and in the waters, and can be found as parasites in the intestines of animals and humans. In humans they are the cause of different groups of infectious diseases: such as enteric feversthe typhoid and paratyphoid.

Salmonellosis are the most forms common of salmonella disease and manifest as localized infections of the intestine (food poisoning) and are caused by minor salmonellae. Septicemia infection associated with the salmonella and whose risk of occurrence is higher in geriatric, pediatric and immunocompromised patients.

So when you buy a food product it is identified from the Ministry of Health as a product with a high salmonellosis risk you really need to be very careful. The risk to our health is very high. 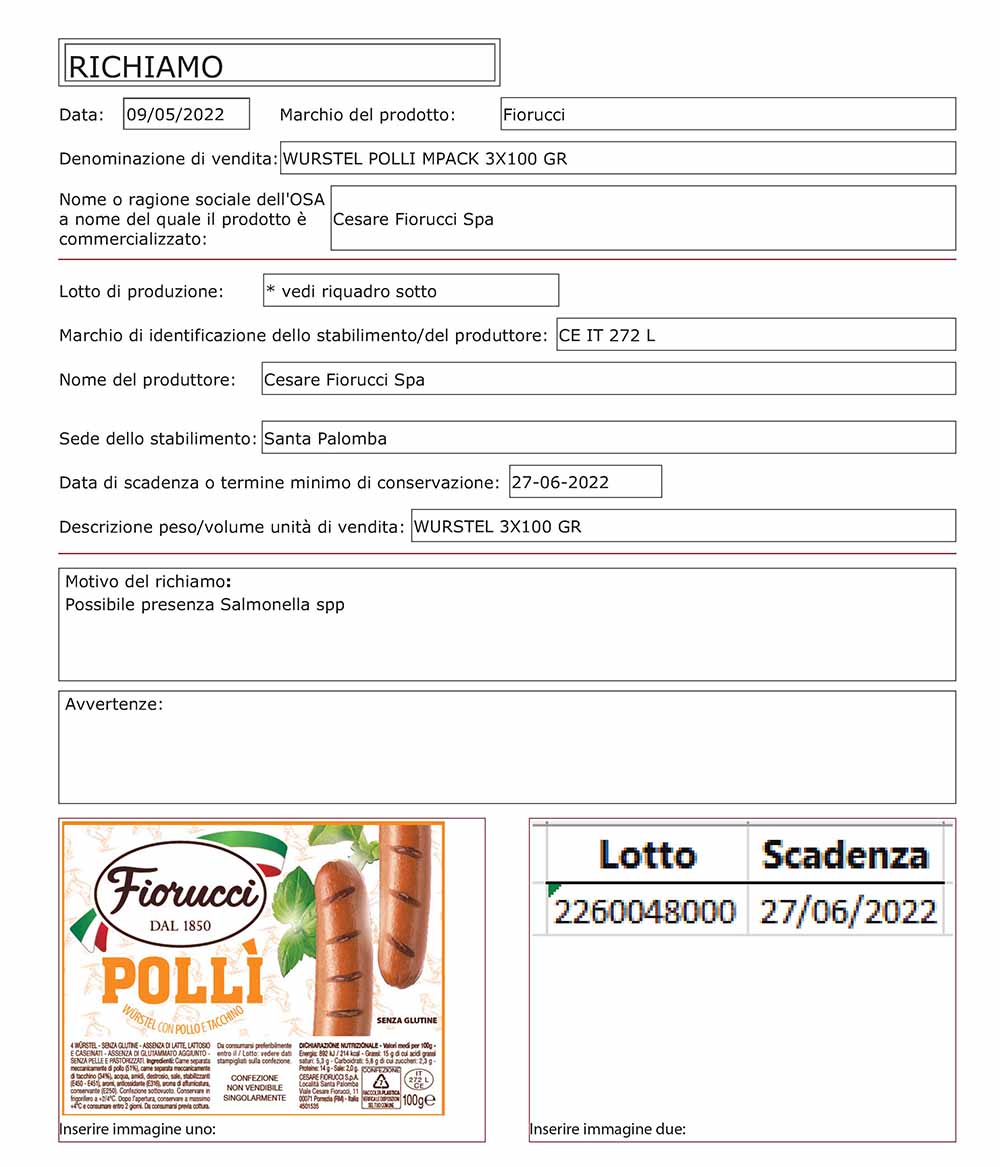 Wurstel Pollì Fiorucci recalled for salmonella A batch based on chicken and turkey (3x100g package) was recalled for the possible presence of salmonella https://t.co/P3X47xZHor pic.twitter.com/1q2UkRSCrB